(RNS) A majority of Protestant pastors plan to vote for GOP presidential nominee Mitt Romney, according to a new survey, but nearly a quarter are still undecided less than a month from Election Day.

Just 17 percent of Protestant pastors said they would vote to re-elect President Obama, with 57 percent favoring Romney and 22 percent undecided, according to a survey conducted by LifeWay Research. 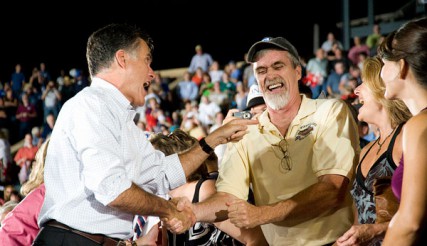 Mitt Romney shares a laugh with supporters at a rally in Nashua, NH. Romney has finally found a religious middle ground, evangelical leaders say, by sidelining Mormon theology and stressing the ?Judeo-Christian values? that he shares with social conservatives.

Based in Nashville, Tenn., the research firm is a branch of LifeWay Christian Resources.

The results are remarkably similar to a LifeWay survey conducted in October 2008, which found that 55 percent of Protestant pastors planned to vote for then-GOP nominee John McCain, 20 percent for Obama and 22 percent were undecided.

Among the Protestant pastors who will not vote for Romney, just 15 percent said his Mormonism factored in their decision. Six in 10 undecided pastors said their hesitation is not related to Romney's membership in the Church of Jesus Christ of Latter-day Saints.

A LifeWay survey conducted in 2011 found that 75 percent of Protestant pastors do not consider Mormons Christians.

“If agreement on matters of faith was a necessity for pastors' voting decisions, Romney would have little support from pastors,” said Scott McConnell, director of LifeWay Research. “In fact, Romney's Mormon faith has led very few pastors to select a different candidate or remain undecided.”

Regional and generational differences also played a role in voting preferences. Pastors in the Northeast (28 percent) are more likely to vote for Obama than Southern (14 percent) and Western (15 percent) pastors.

Younger pastors, meanwhile, are far less likely than their elders to vote for Obama. Just 14 percent of pastors age 18-44 say they will vote for the incumbent. They are also more likely to be undecided than pastors 55 and older.

Donovan Golden, the community pastor at Metro Church in Rogers, Ark., is among the young evangelicals who will not vote for either candidate. The 27-year-old Liberty University graduate said Obama’s liberal policies and Romney’s religion both give him pause.

“Our values are based on our theology,” said Golden, who has studied the distinctions between Mormonism and mainstream Christianity. “So our leaders’ theological stances are vitally important. Our theology shapes our values — not vice versa.”

This election, Golden said he is taking his cue from Charles Spurgeon, a 19th-century British Baptist preacher who famously said, “Of two evils, choose neither.”

The survey of Protestant pastors was conducted by phone Sept. 26-Oct. 3. Churches were selected randomly, and each interview was conducted with the church's senior pastor, minister or priest, according to LifeWay. For the full sample of 1,000 pastors, the margin of error is plus or minus 3.2 percentage points.