(RNS) After years of shunning the partisan political spotlight, is Billy Graham a born-again Republican?

In May, the elderly evangelist was featured in an ad supporting a North Carolina referendum that would ban gay marriage.

After a recent meeting with GOP presidential nominee Mitt Romney, the Billy Graham Evangelistic Association scrubbed language describing Mormonism as a “cult” from its website. 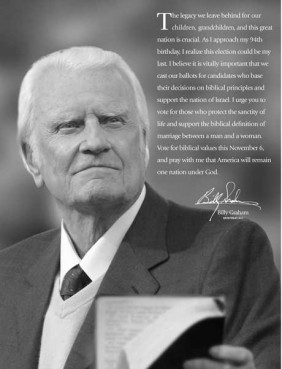 Why has the famed evangelist – who has said he has learned hard lessons about being too political – getting so involved in the 2012 elections?

Experts who’ve watched Graham’s decades-long career say 2012 marks a new trajectory for the 93-year-old evangelist, and they speculate that Franklin Graham, his son and the president of the Billy Graham Evangelistic Association, could be playing a primary role.

“If not a new turn, he’s further down the road, with expressing a preference for a candidate,” said William Martin, author of  “A Prophet With Honor,” a 1992 biography of Billy Graham. “I’m reasonably certain that he’s not done this before.’’ “If not a new turn, he’s further down the road, with expressing a preference for a candidate,” said William Martin, author of “A Prophet With Honor,” a 1992 biography of Billy Graham.

At Romney’s meeting with both Grahams in North Carolina, Billy Graham told Romney he would “do all I can to help you,” according to a Romney campaign aide. Though the “vote biblical values” campaign does not mention Romney by name, it dovetails with his policies. President Barack Obama’s has said he personally supports same-sex marriage, and his campaign faith platform describes him as “pro-choice.’’

Martin said Graham – who’s met with every president since Harry Truman – has often been coy about those relationships, while his son has not. The new BGEA campaign is “more in line” with the son’s historical behavior than the father’s, Martin said.

“I think that Franklin has an influence in there,” Martin said. “But I can’t say … that he is leading his father to do something that he’s not willing to do.”

Martin said Graham’s seal of approval could serve to ease some evangelicals’ lingering discomfort with Romney’s Mormon faith. “Having Billy Graham’s blessing on Gov. Romney would certainly free people of reservations on that score,” Martin said.

“The ‘vote biblical values’ campaign repeats the slogans of the religious right in ways that Billy Graham never did until he was very old and frail,” Hamilton said. “I think it would be more responsible for the media and for Americans to interpret these statements as the statements of the Billy Graham Evangelistic Association and its current president, Franklin Graham, as opposed to the statements of Billy Graham himself.” Tullian Tchividjian is the author of ‘Glorious Ruin: How Suffering Sets You Free’, that released last month. He is also the senior pastor of Coral Ridge Presbyterian Church in Fort Lauderdale, FL and the grandson of Billy Graham. Tchividjian is pictured here with Billy Graham.

Asked if he was surprised about his grandfather’s involvement in the “biblical values” campaign, the Rev. Tullian Tchividjian, Billy Graham’s grandson, said both yes and no.

“It’s closer than he’s been in a long, long time in my opinion, to get involved in something like this,’’ said Tchividjian.

He has remembered his grandfather feeling the fallout of his close friendship and support for President Richard Nixon, which led him to a divine warning that he was a primarily a preacher and not a politician.

But Tchividjian expects that it was “an idea that was presented to him” – he said he did not know by whom – and it made sense as an elder “statesman” to speak out on issues he’s long believed represented the Bible’s teaching.

“It’s probably not something that he came up with on his own,” said Tchividjian, noting his grandfather’s almost 94 years. “Nobody in the organization, including my uncle, would have done it if my grandfather had not agreed to it or signed off on it.” 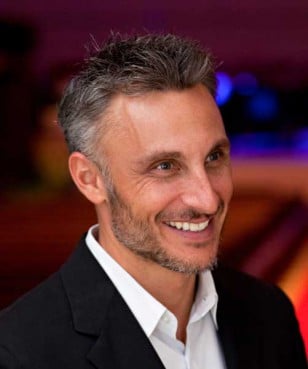 Tullian Tchividjian is the author of ‘Glorious Ruin: How Suffering Sets You Free’, that released last month. He is also the senior pastor of Coral Ridge Presbyterian Church in Fort Lauderdale, FL and the grandson of Billy Graham. Tchividjian is pictured here with Billy Graham.

Time will tell if this foray into the political realm will affect Graham’s long-term legacy.

“In the eyes and minds of some people, it could enhance his legacy,” said Tchividjian, pastor of Coral Ridge Presbyterian Church in Fort Lauderdale, Fla., where the Rev. D. James Kennedy, an icon of the religious right, was the longtime pastor. “In the minds and eyes of other people, it could diminish it.”

Mark DeMoss, a spokesman for Franklin Graham, and a key liaison between Romney and evangelicals, was not available for an interview beyond the BGEA statement, which noted that the ad did not endorse any candidate or political party.

The elder Graham’s spokesman, A. Larry Ross, said the ad is “consistent” with the BGEA’s mission and Graham’s personal practice of staying “politically neutral” in his public ministry.

“He is challenging citizens – particularly the faith community – on how to vote, rather than for whom to vote,” Ross said.

Martin has been working on new chapters of his Graham biography, and now says he will have to rework them.

“Now I think I must go back and take something out and put in something about these latest developments,” Martin said. “I can’t leave that out.”

Tchividjian, who can no longer speak to his grandfather by phone because of the elder Graham’s severe hearing loss, said he’ll have to wait a couple of weeks to ask him in person about his election-related activities.

“The next time I see him will be after the election,” he said, “so I’m sure we’ll have plenty to talk about.”

News
Colorado woman who won’t get vaccinated denied transplant
Follow us on Facebook!
Submit your photos to RNS