WASHINGTON (RNS) A 19th century copy of the U.S. Constitution in Yiddish and Hebrew. A 15th century Hebrew book from Italy open to a page of passages that had been censored by the Catholic Church during the Inquisition. A 20th century “Curious George” children’s book translated into Yiddish. Spanning across the centuries and the globe, they’re all part of a new exhibit, “Words Like Sapphires,” which celebrates 100 years of Hebraica at the Library of Congress.

The exhibit features some 60 objects, religious and lighter fare, drawn from the Library of Congress’ more than 200,000-piece Hebraica collection. The collection includes works in Hebrew, Yiddish, Ladino (or Judeo-Spanish), Judeo-Persian, Judeo-Arabic, Aramaic, Syriac and Amharic (from Ethiopia).

The collection was established in 1912 with a gift from New York financier and philanthropist Jacob Schiff. His initial donation of nearly 10,000 books and pamphlets put the Library of Congress on par with national libraries in Europe, according to Peggy Pearlstein, head of the library’s Hebraic section.

As a result of the gift, scholars no longer had “to travel to Europe to study about the foundational works about Judaism and Jewish civilization,” she said. 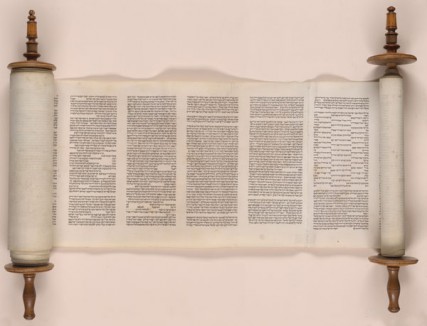 Dutch-English Torah Scroll with embroidered fabric cover from the late 17th to early 18th centuries – part of a Library of Congress exhibit celebrating one of the world’s largest collections of Jewish artifacts.

At the time, the library already had Russian and Japanese collections. The Hebraica addition fit in with then-Librarian of Congress Herbert Putman’s vision to amass “a universal collection of knowledge,” Pearlstein said.

“By creating an Hebraica/Judaica collection, the Library of Congress was granting recognition to America’s Jewish community,” which at the time was growing rapidly, “and likewise highlighting the importance of Jewish civilization in the shaping of our world,” said Jonathan Sarna of Brandeis University, the dean of American Jewish historians.

Coinciding with the establishment of other significant Jewish library collections in the United States — including at the Jewish Theological Seminary, New York Public Library and the Hebrew Union College — “it helped facilitate the transfer of Jewish culture and civilization from the old world to the new,” Sarna said.

The new exhibit title uses the word sapphire in tribute to the image that rabbis and poets used “in the medieval period to talk about clarity and brilliance of the written word,” said Pearlstein.

In creating the centennial exhibit, which runs through March 16, Pearlstein looked for objects with far-flung origins, then placed them among seven themes, including “People of the Book,” the “Holy Land Tongue” and the “Power of the Tongue.” The earliest work is a 7th century clay incantation bowl from Mesopotamia with Aramaic writing (a Semitic language that uses Hebrew letters). 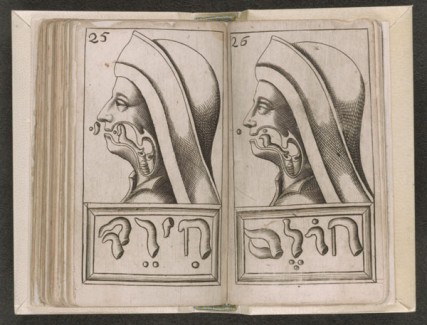 Within “People of the Book,” there’s a miniature Bible not more than 4 inches high and dating to the 17th or 19th century. There’s also the first complete Hebrew Bible printed in the United States, in 1814 Philadelphia. Several members of Congress, including Reps. Sander Levin, D-Mich., Debbie Wasserman Schultz, D-Fla., and Brad Sherman, D-Calif., have used that Bible for their ceremonial swearing-in.

Among Pearlstein’s selections in “Holy Land Tongue” is the first printed book published in the Holy Land, a commentary on the Book of Esther. Eliezer ben Isaac Ashkenazi of Prague published the book in 1577 in Sfat, near the Galilee.

Several scrolls of Esther, which tell the story of the Jewish queen of Persia who saved her people from genocide, figure prominently in the exhibit and were chosen for their colorful illuminations. One is among the most recent items, created in 2010 in Jerusalem, at just four inches high. Another, The Washington Megillah, probably dates to early 18th century Italy and takes its name from the place it resides.

In “Power of the Tongue,” Pearlstein includes “Dickdook Leshon Gnebreet,” the first Hebrew grammar book published in America in 1735. Judah Monis, the Harvard College Hebrew instructor who wrote the book, had to convert to Christianity to be eligible to teach at the school.

This section also features a book published in 1891 with Yiddish and Hebrew translations of the Constitution and Declaration of Independence. In his preface, J. D. Eisenstein wrote that his aim was “to Americanize Jewish residents of the lower part of the city of New York and of which the writer of these lines is a member.”

Among the exhibit’s lighter fare is not only the “Curious George” book, but also a Winnie the Poo book in Yiddish transliteration – Vini-der-Pu — and playing cards by cartoonist and manuscript illuminator Arthur Szyk using biblical figures for each of the deck’s 12 kings, queens and jacks. King David, for instance, clasps a harp as the king of clubs, while the prophet and judge Deborah hold the scales of justice as the queen of diamonds.