NEW YORK (RNS) Broadway openings often feature a first — the debut of a new star, the premiere of a new playwright’s work. On Thursday (Nov. 15), theatergoers at the opening night performance of “Scandalous” will witness a never-before-seen trifecta. 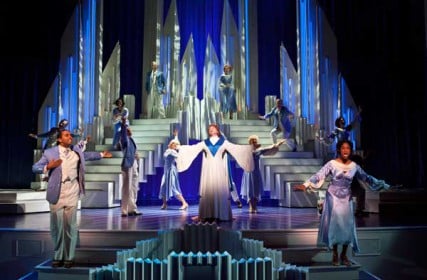 Carolee Carmello (center) and company in a scene from the new Broadway musical “Scandalous: The Life and Trials of Aimee Semple McPherson” at the Neil Simon Theatre.

“Scandalous: The Life and Trials of Aimee Semple McPherson” is the first Broadway musical about the showbiz-savvy revivalist whose ministry was rocked by scandal in the 1920s. It’s also the first Broadway show with a book and lyrics written by “Today” show co-host Kathie Lee Gifford. And it marks the first time the Foursquare Foundation, which supports Pentecostal ministries, has invested in a Broadway show.

Whether “Scandalous” will become a financial or critical success remains unclear, but Gifford, who has worked on the musical for 12 years, said it’s a story well suited to Broadway.

“Billy Graham would make a very bad musical,” she said in interview. “I consider myself blessed to know him as a friend, but Billy’s life is scandal-free. Aimee’s wasn’t. Aimee was a very theatrical person.” While McPherson may be known for allegations that she faked her own kidnapping, she was nonetheless a pioneer. She began traveling the country and leading revivals before women had the right to vote. Her Angelus Temple in Los Angeles was an early megachurch. She was one of the first women to receive a broadcast license, hobnobbed with celebrities and appeared briefly on Broadway in the 1930s.

The church she founded in the 1920s grew into The Foursquare Church, which now claims almost 8 million members worldwide.

“McPherson was the most famous evangelist or revivalist in the 1920s, 30s and 40s,” said Matthew Sutton, author of “Aimee Semple McPherson and the Resurrection of Christian America.” “Every American living in that period knew who she was.”

Gifford’s decades-long fascination with McPherson began when she first heard about her in college. “I remember thinking, ‘No one could’ve lived a life like that,’” she said.

Gifford, who speaks often about her Christian faith and has recorded several gospel albums, continued to encounter references to McPherson. At one time, she attended a church led by a preacher who attended a college McPherson founded. Her husband, Frank Gifford, had attended McPherson’s church as a child.

“It seemed like every time I turned around someone was referencing Aimee,” she said.

Gifford, who was co-host of “Live! With Regis & Kathie Lee,” for 15 years, said her thoughts on McPherson “marinated” for years until she began work on the musical, which was produced in Seattle in 2011 with the title “Saving Aimee.” Tony Award nominee Carolee Carmello played McPherson in the Seattle and Broadway productions. 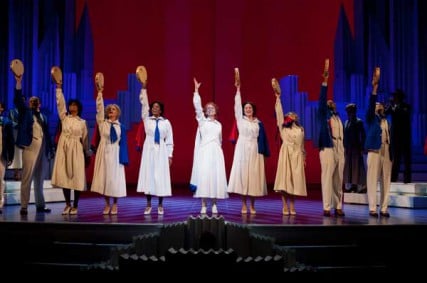 Carolee Carmello (center) and company in a scene from the new Broadway musical “Scandalous: The Life and Trials of Aimee Semple McPherson” at the Neil Simon Theatre.

The show opens with a scene about the biggest scandal of McPherson’s career. In 1926, she disappeared while swimming in California. When she resurfaced five weeks later in Arizona, she said she had been kidnapped and held prisoner in Mexico. Her critics said she disappeared to be with a married lover. She was charged with lying to a grand jury and conspiracy to commit a hoax in connection with the case, but those charges were dropped.

The show flashes back through key moments in McPherson’s life, including her decision to leave her second husband and travel the country holding tent revivals that drew thousands. She began her ministry a few years after the birth of Pentecostalism, and almost single-handedly popularized the movement that's best known for speaking in tongues and faith healings.

“Aimee Semple McPherson was one of the great pioneers of religious spectacle,” said Diane Winston, an expert on religion and media at the University of Southern California. “We think today about megachurches where they have rock bands and multi-screens. She was doing the equivalent in the 1920s and 30s.”

The Angelus Temple, which held more than 5,000 people, hosted 21 services a week, said Sutton, who is an associate professor of history at Washington State University. The most popular service featured Bible stories brought to life with professional sets, actors and music. In the Broadway musical, these services are dramatized in several scenes, including one featuring a scantily clad Adam and Eve and a talking snake.

McPherson was also quick to recognize the power of radio. She built her own station, which broadcast her church services, music, and interviews that reached much of the Western U.S. 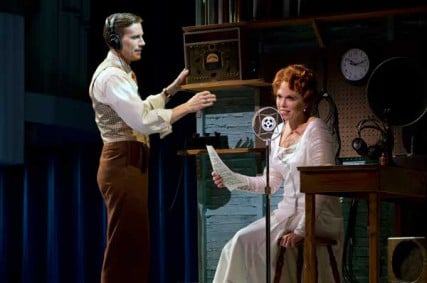 Andrew Samonsky as Kenneth Ormiston and Carolee Carmello as Aimee in a scene from the new Broadway musical “Scandalous: The Life and Trials of Aimee Semple McPherson” at the Neil Simon Theatre.

“She brought old-time religion into the modern age,” Sutton said. “In that era we have radio, movies, and the car. We have Americans moving into cities. She was right there. In that sense, she was the first modern evangelist.”

Gifford — who described her faith by saying she is “a very bad follower of Jesus. Every day I try to be a better one” — said she did not write the musical as an act of evangelism. Yet she hopes audiences will be inspired to recognize their individual value. Several times in the show, McPherson’s character says to another, “If you have a pulse, you have a purpose.”

“What I love about Aimee is that she got dirty for her faith,” Gifford said. “She went into brothels and bars where no legitimate 'lady' would have been seen. She went because there were hurting people there. In that sense, she’s a far better Christian than I’ve ever been.”

While the show is more Broadway than Sunday school, there are religious references. The songs “What Does It Profit?” and “For Such a Time As This,” are inspired by verses in the biblical books of Matthew and Esther. There's also a reference to Jeremiah 29:11 as the McPherson character talked about hope. 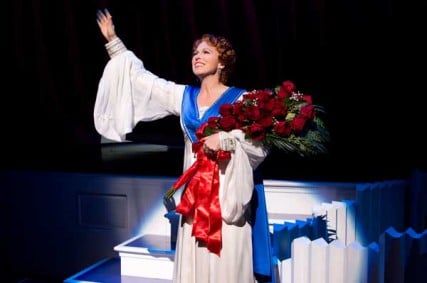 Carolee Carmello in a scene from the new Broadway musical “Scandalous: The Life and Trials of Aimee Semple McPherson” at the Neil Simon Theatre.

The Foursquare Foundation, which normally funds social ministry and evangelism, is one of several financial backers of the show. The foundation had no input on the content.

“We think the story of Aimee’s life is remarkable and uplifting,” said Greg Campbell, the foundation’s executive director. “We hope it will inspire people to learn more about her. And that, we hope, will direct them to a relationship with the Lord Jesus.”