But in the atheist community, the 17-year-old is nothing short of a celebrity. 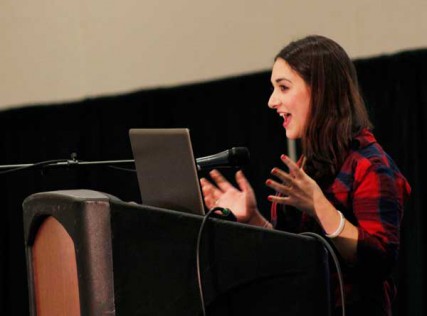 Jessica Ahlquist, a 17-year-old atheist, shares her story at Skepticon, a national skeptics convention held in Springfield, Mo. Ahlquist won a lawsuit against her high school in January after it refused to take down a Christian prayer poster. Although criticized in her hometown community, she is seen as a hero in the atheist community.

In January, she won a lawsuit against her high school after it refused to take down a Christian prayer banner that had hung for decades from the wall of the school auditorium. The months-long ordeal cost her friends and brought criticism to her family. People she had known since elementary school wrote nasty tweets about her. A state representative called her an “evil little thing” – a phrase many atheists now wear with pride on T-shirts.

“I learned not to care if people hated me for it,” she said.

On Saturday (Nov. 10), she stood before an audience that was anything but hateful. She shared her story with more than 700 people at Skepticon, an annual skeptics convention held here in the heart of the Bible Belt. Afterward, audience members – many of them atheists – crowded around her.

“I just wanted to shake your hand,” one person said.

“You inspired me to stand up,” said another.

Ahlquist’s is just one example of the struggles often faced by young atheists, particularly in public high schools. Although the number of Americans who consider themselves religiously unaffiliated is growing – and atheists make up a small part of that demographic – young atheists still often have to fight for acceptance, especially in highly religious communities. 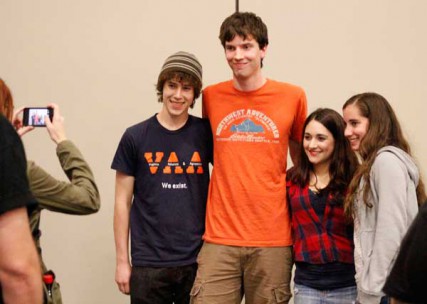 Skepticon attendees pose for a picture with Jessica Ahlquist (third from left) after she shared her story as a young outspoken atheist.

Ahlquist’s boyfriend of five months, Kenneth Flagg, has faced his own challenges as an atheist. As a high school athlete in Minnesota, his teammates dropped him after he opened up about his unbelief. “I kind of said, ‘So be it,'” he said.

Mentoring younger atheists is exactly what author and the Friendly Atheist blogger Hemant Mehta advises open atheists to do. Mehta also spoke at Skepticon, telling story after story of challenges – a student athlete who chose not to participate in the team prayer after each game, an assistant principal who had to schedule and teach at a Bible camp.

But things are starting to shift.

“Students are getting attention for being atheist in high school, and it’s not always bad,” Mehta said, citing a New York Times story about an atheist club started in a Florida high school. 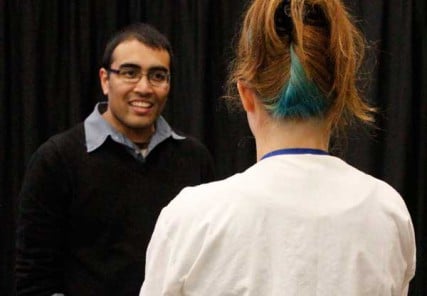 Hemant Mehta gives advice to a 13-year-old atheist who wants to start a group at her school, but has faced criticism from friends and classmates for her beliefs.

After Mehta’s talk, a mother and her 13-year-old daughter asked for his advice. They asked that their names not be used because they fear the repercussions in their small Missouri town. The daughter already gets cruel messages from classmates – her friends tell her she’ll burn in hell – and the mother doesn’t want her atheism to affect her new job.

But the daughter, an outspoken eighth-grader, wants to start an atheist club when she enters high school. “I don’t want her to have to be someone else,” her mom said.

Mehta said people need to start groups and have these discussions so others can understand atheism more. He has a new book, “The Young Atheist’s Survival Guide,” coming out later this month.

In Ahlquist’s hometown, “things are settled down considerably,” she said. She graduated early and now spends her time at speaking engagements around the country – she usually does about one per month, though she really doesn’t like public speaking.

She’s starting to think about college, and she has more than $60,000 waiting for her in an endowment set up on Mehta’s blog. Atheists around the country donated to the cause to support her continuing education.

She hasn’t settled on a college just yet. She loves reading and writing but doesn’t know yet what she’ll major in.

But she does know one thing: “I would really like to continue doing activism.”

(Kellie Kotraba is the editor of Columbia Faith and Values, ColumbiaFAVS.com.)