(RNS) A billboard bearing a positive message about atheism has been vandalized — again. A billboard posted in Chico, Calif., that originally read “Don’t believe in God? Join the club” was defaced on Dec. 12, less than a week after it appeared, with vandals removing the word “don’t.” RNS photo courtesy United Coalition of Reason

A billboard posted in Chico, Calif., that originally read “Don’t believe in God? Join the club” was defaced on Dec. 12, less than a week after it appeared, with vandals removing the word “don’t.” The billboard was one of 12 purchased this month by a local chapter of the United Coalition of Reason (UnitedCoR),  a national organization that works to unite small, local groups of atheists and other freethinkers.

They are the latest in a long line of billboards erected by atheist groups to draw ire, both locally and nationally. Every national freethought organization that has purchased billboards or bus advertisements in the last five years has reported some form of vandalism or protest.

If the billboards attract negative attention, criticism and vandalism, why do atheists — a group that polls repeatedly rank among the least-liked group in America — buy them? Are they worth the money and the ill will they cost the groups that buy them?

“We are raising awareness, reducing ignorance and enlightening this country. Atheists are here, atheism is growing and if you have a silly idea, we are going to challenge you on that. And God is a silly myth.”

Billboard advertising is no small matter — in 2011, U.S. businesses spent $6.4 billion on outdoor advertising, with two-thirds of that ($4.1 billion) going to billboards,  according to the Outdoor Advertising Association of America.

Perhaps because they’re so visible, religious billboards and transit ads have a way of becoming ground zero in the culture wars — for and against Islam, abortion, gay marriage and other hot-button issues. And location matters: Billy Graham Parkway outside Charlotte, N.C., has seen ads for both atheism and a church’s apology after “narrow-minded” North Carolina voted to ban gay marriage.

American Atheists are frequently at the center of the controversies. In 2010, they posted a billboard near the New Jersey side of the Lincoln Tunnel with a nativity scene and the words “You know it’s a myth.” That outraged the Catholic League, which soon bought its own billboard that read, “You know it’s real. This season, celebrate Jesus.”

This year’s American Atheists billboard is in Times Square and features pictures of Santa and Jesus with the phrase, “Keep the Merry! Dump the Myth!”

“This is vile,” Catholic League President Bill Donohue said of the the Times Square billboard. “When you depict Jesus on the cross with a crown of thorns, this is exploitative. We as Christians never harass, intimidate or insult atheists. But they can’t seem to say, ‘We simply disagree with you.’ They have to insult us.”

Atheists also turn their attention to ads outside the December holidays. Other billboard battles include: 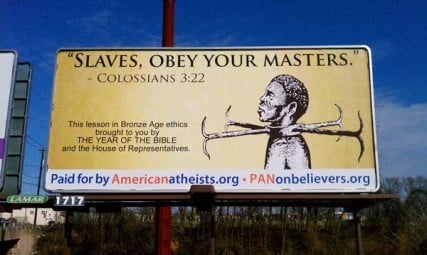 The Pennsylvania Human Relations Commission is investing the destruction to a billboard put up in one of the city’s most racially diverse neighborhoods. RNS photo courtesy Carl Silverman

“We don’t go out of our way to avoid these times, and we even have a good reason for occasionally selecting them,” said Fred Edwords, national director of UnitedCoR, which runs billboards and bus ads throughout the year and provided the funds for the Chico billboards.

“It is during Easter and Christmas that non-Christians become most aware that they don’t belong to the dominant faith. They are forced to think about that. So this is an ideal time to let people like us know that they, too, can enjoy the warm fellowship of others who think as they do.”

And while the billboards frequently attract the attention of local religious leaders and upset religious people, the groups that purchase them say they are not intended to “convert” people to atheism.

“The true believer is not my target market,” Silverman said. “I am seeking those who have serious doubts about their god’s existence, or have already admitted to themselves that they know it’s a myth.”

In that respect, the billboards have some effect. Atheist groups in cities where the billboards run — especially smaller cities — report their membership grows after billboard campaigns.

In Chico, local atheist organizer George Gold has not yet filed a police report about the vandalism of the billboards, which cost about $3,800 to put up.

“Now we are more committed than ever to the cause of making our presence known,” Gold said in a statement. “Hopefully this vandalism will inspire more nontheistic people in the Butte County area to realize how important it is to get organized. Only by working together will we end bigotry against philosophical and religious minorities.” 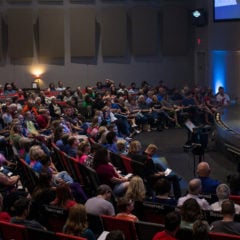 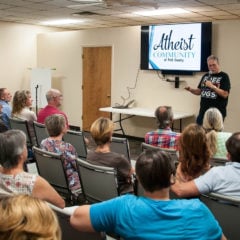 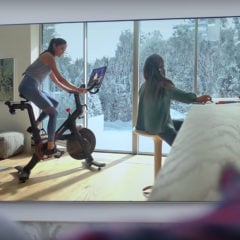 Arts & Culture
The sin and self-care of Peloton