WASHINGTON (RNS) President Obama will take the oath of office with two Bibles that once belonged to a pair of civil rights icons: Abraham Lincoln and Martin Luther King Jr. 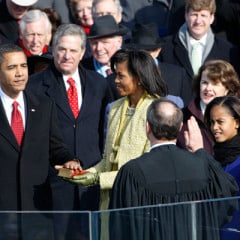 The Lincoln and King good books will be used during this year’s public swearing-in ceremony on Monday, Jan. 21, the Presidential Inaugural Committee announced. King’s Bible will be stacked atop Lincoln’s.

“President Obama is honored to use these Bibles at the swearing-in ceremonies,” said Steve Kerrigan, president and CEO of the inaugural committee. “These Bibles are rich in tradition and reflect the great American story that binds our nation.”

In a statement, Martin Luther King III said he is proud that his father’s Bible will be a part of Obama’s inaugural, “and I hope that our great nation uses the moment to reflect on the enormous responsibility we have to serve our neighbors and communities.”

King added: “Thousands of Americans joined Dr. Martin Luther King, Jr., on the National Mall in the fight for equality and justice 50 years ago, and I am excited that my father’s legacy will be honored as thousands more join President Obama to begin his second term.”

The second term officially starts on Sunday, Jan. 20, when Obama holds a private swearing-in ceremony at the White House. For that event, he will use a Bible belonging to the family of first lady Michelle Obama.

“The Robinson Family Bible … was a gift from the first lady’s father, Fraser Robinson III, to his mother, LaVaughn Delores Robinson, on Mother’s Day in 1958,” said the inaugural committee, which noted that she used it regularly. “Mrs. Robinson was the first African-American woman manager of a Moody Bible Institute’s bookstore.”

Vice President Biden, meanwhile, will be sworn into a second term using his family Bible.

“The King Bible was Dr. King’s ‘traveling Bible.’ An avid reader who was constantly on the road, Dr. King typically traveled with a selection of books that included this Bible. It was used for inspiration and preparing sermons and speeches, including during Dr. King’s time as pastor of Dexter Avenue Baptist Church in Montgomery, Alabama.”

“The Lincoln Bible is part of the collections of the Library of Congress and was originally purchased by William Thomas Carroll, Clerk of the Supreme Court, for use during Lincoln’s swearing-in ceremony on March 4, 1861. The Bible itself is bound in burgundy velvet with a gold-washed white metal rim around the three outside edges of both covers, and all of its edges are heavily gilded.”