(RNS) After all three Masses on the weekend of Jan. 19-20, parishioners of St. Aloysius Catholic Church in Springfield, Ill., were handed a statement written by Bishop Thomas Paprocki.

The bishop explained that St. Aloysius’ pastor, the Rev. Thomas Donovan, “is suffering from a psychological condition that manifests itself in self-bondage as a response to stress.” 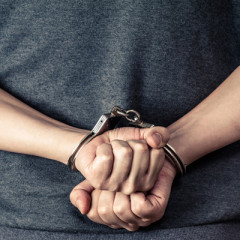 The Rev. Thomas Donovan, “is suffering from a psychological condition that manifests itself in self-bondage as a response to stress.” RNS photo courtesy Shutterstock.com. *Note: This image is not available to download.

The statement was a response to a 911 call in November by Donovan from the parish rectory. In it, the priest tells dispatchers he had placed himself in handcuffs and asks police to help free him.

After the recording of Donovan’s 911 call rocketed across the Internet, Paprocki was in a unique situation. His priest had not done anything illegal, and yet he’d been found doing something most people would consider bizarre.

In Paprocki’s 1,038-word response to parishioners, he took the unusual step of delving deep into Donovan’s psychological problem. With the priest’s consent, the statement includes a description of what Donovan’s own clinical therapist had diagnosed as “non-sexual self-bondage.”

For the last decade, in the wake of the clergy sexual abuse crisis that rocked the Catholic church, bishops have been hammered by critics for breaking repeated promises for transparency in documentation of past abuses and investigations of present-day accusations of sexually abusive priests.

But there are signs that a younger generation of church leaders have learned lessons from the last decade and are attempting to be as open as possible when a crisis comes to their diocese.

Yet in the case of St. Aloysius, that desire for transparency may have produced a response that caused more harm than good.

Springfield police responding to Donovan’s 911 call on Nov. 28 said that as far as they could tell, there was no one else in the rectory when they arrived at 4:45 a.m.

Donovan’s hands were cuffed behind his back with the keyhole facing up, so he couldn’t unlock himself, according to the police report. He was wearing an orange jumpsuit and “a leather bondage-type mask with a bar in his mouth.”

The officers uncuffed Donovan, and asked if he needed medical attention. The priest said he was fine, he was alone, and that he “does this from time to time.”

What, exactly, “this” was must have been the topic of conversation when Donovan was summoned to Paprocki’s office 11 days later.

During that meeting, the bishop learned that Donovan was “mortified” by what happened, but insisted he’d been alone “the whole time of this incident,” and “denied that there was any sexual component to this,” according to Paprocki’s statement.

The following weekend, the diocese’s vicar general celebrated Mass at St. Aloysius and told the parishioners that Paprocki, 60, had granted Donovan a leave of absence. He read a message from the priest in which he said he had been “responding to the stresses of priestly ministry in a way that has come to compromise my own personal safety and welfare.”

Donovan, 41, grew up in Decatur, Ill. and went to Catholic schools there, according to diocesan records. He was ordained in 2005 in the Springfield diocese, and has served as pastor of parishes in Carlinville and Springfield.

Donovan is also a chaplain in the Illinois Air National Guard, serving with the 182nd Airlift Wing in Peoria. He lost 80 pounds in order to enlist in 2008, according to Maj. Brad Leighton, public affairs director for the Illinois National Guard. Since then Donovan has deployed twice — in 2010 and again last year — to Landstuhl, Germany, where he ministered to wounded personnel.

When the audio of Donovan’s 911 call to the Springfield police and the police report became public in December, they sailed around the Web, and online headline writers had a blast — revealing, for instance, that a “kinky priest” had been “tied up at the moment.”

Earlier this week, Paprocki told St. Aloysius parishioners in his own statement that “some of those stories are untrue and even defamatory.” He wrote that with Donovan’s consent, he would disclose to them the priest’s “private patient information.”

And it’s here that Paprocki’s unusually intimate act of transparency may have raised more questions than answers.

The bishop said that after a review of Donovan’s “work and lifestyle patterns,” the diocese had found he “severely-compromised patterns of self-care with respect to diet, exercise, sleep, work hours, and unreasonable expectations of himself as a pastor.”

Such patterns, the bishop continued, can lead a person to self-medicate. Sometimes that comes in the form of alcohol, drugs, gambling or pornography. In Donovan’s case, according to an unnamed therapist the bishop cited, stress reduction came in the form of self-bondage.

The therapist assured Paprocki, and Paprocki assured Donovan’s flock, that “that this self-bondage is to be understood as non-sexual in nature.”

Kenneth Rosenberg, a psychiatrist in private practice who is affiliated with Weill Cornell Medical College in New York and specializes in sexual disorders, said that although “non-sexual self-bondage” doesn’t exist in the DSM, Donovan’s actual problem can probably be found there.

“It’s called a sexual disorder not otherwise specified,” Rosenberg said. “Bondage is often associated with sexual behavior, and I’m of the belief that that ought not to be such a stigmatizing issue.”

Rosenberg said religious communities often stigmatized sexual disorders and that “it shouldn’t be so important.”

“But religious figures have other agendas,” he said. 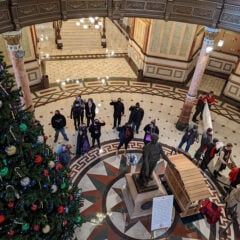