(RNS) Who should Christians root for in Sunday’s Super Bowl: the San Francisco 49ers or the Baltimore Ravens? 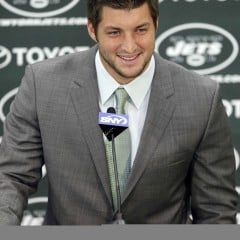 Quarterback Tim Tebow addresses the media during his debut with the New Jersey Jets in Florham Park, N.J., on March 26, 2012. RNS photo by Robert Sciarrino/The Star-Ledger.

It may be a silly question to some, though not to millions of American believers who invest a lot of faith and hope in their sports teams, and see it repaid many times over by the regular public testimonies of numerous athletes and coaches.

A survey released days before the big game shows that more than a quarter of Americans – and about four in 10 evangelicals – think God will help decide the winner of the Super Bowl. So certainly God is rooting for one side or the other, no?

This year’s NFL championship game, however, is especially challenging for those who like their Christian faith to align with their sports loyalties.

The problem is not that evangelical poster boy Tim Tebow isn’t in the big game; heck, the celebrity quarterback had such a lousy season with the New York Jets that no one knows if Tebow will ever make it back to the pros, much less to the playoffs.

Instead, the heart of this moral conundrum is that both the Ravens and Niners have more than their share of Bible-quoting believers — as well as card-carrying cads. And to make matters worse, the saint and sinner can be the same person.

Not only is Lewis a great player, but he is so outspoken about his Christian faith that Sports Illustrated dubbed him “God’s Linebacker” in a 2006 cover story. Moreover, Lewis is retiring after a 17-year career and a season in which he made an improbable (miraculous?) return from a triceps tear that should have ended his year. Redemption, anyone? On the other hand, Lewis is a fierce and intimidating character who was implicated in a double homicide 13 years ago outside an Atlanta nightclub, an incident that led to a plea deal on a reduced charge. To the anguish of some victims’ relatives, he still has not spoken in detail about what happened that night.

Lewis is also the father of six children by four different women, none of whom he has married; even after his clamorous conversion to Christianity, his chief bit of fatherly wisdom to other players was to use a condom. “Limit yourself with how many women you see. And strap up!” as he told Sports Illustrated.

To top it all off, Lewis has just been linked to a banned substance that allegedly helped speed his return from the triceps injury — allegations he has heatedly denied.

Then there’s the 49ers. San Francisco’s coach is Jim Harbaugh, a devout Catholic who wears his faith on his sleeve. On the other hand, Harbaugh wears pretty much everything on his sleeve. He is best known for his profane sideline tirades and he is routinely labeled “intense,” which is a football euphemism for when a lot of people think you’re a big jerk.

Then again, the Niners have an inspiring story in quarterback Colin Kaepernick. Harbaugh picked Kaepernick to replace quarterback Alex Smith when the long-suffering starter went out with a concussion mid-season. Kaepernick is so public about his Christianity that his on-field motions of devotion have made “Kaepernicking” an odds-on favorite to replace “Tebowing” as the hot new Christian verb — and controversy. 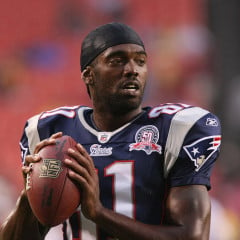 Randy Moss, then of the New England Patriots, before a preseason game against the Washington Redskins at FedEx Field on August 28, 2009 in Landover, Maryland. RNS photo courtesy Keith Allison via Flickr (http://flic.kr/p/6TGTcu)

But, wait … San Francisco also has star wide receiver Randy Moss, who is known as much for his petulance and self-aggrandizing as his pass routes. And there’s cornerback Chris Culliver, who insisted he doesn’t have gay teammates and if he does, “they gotta get up out of here.”

Fine, back to Baltimore. Their coach is Jim Harbaugh’s brother, John, who is every bit the Catholic Jim is, but with less cursing. Yet … the Ravens have strong safety Bernard Pollard, whose pride in delivering violent hits and loud-mouthed taunts matches his outspoken faith to the extent that he is praised by teammates as a “Christian thug.”

Moreover, trash-talking Ravens linebacker Terrell Suggs last year dissed Tebow and the on-field displays of faith that made him a hero to American evangelicals. “With all due respect, we don’t need God on our sidelines,” Suggs boasted. That left Ravens fan Monica Johnson, a writer for the Baltimore Evangelical Examiner, sputtering. “No team loyalty supersedes my love for the Christian brethren,” she wrote. 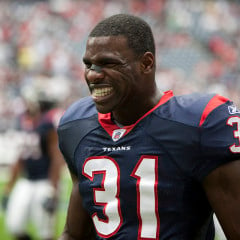 And so it goes. Every time a Christian finds a good reason to root for one of the teams, up pops an apparent disqualifier.

So what is a Christian football fan to do this Sunday? Maybe get some distance, suggests Shirl James Hoffman, author of the 2010 book, “Good Game: Christianity and the Culture of Sports,” and a pointed critic of the ethics of the modern game.

“I will watch the Super Bowl, but not under the illusion that the game is in any sense blessed by God or that it is going to bolster my Christian faith,” said Hoffman, a professor emeritus of kinesiology at the University of North Carolina at Greensboro. “In fact, I will be very conscious of the fact that it is appealing to instincts that are anything but Christian.”

Hoffman argues that modern football is a consumer product that glorifies violence, not God. Unless it can return to its original “flag football” ethos, the pro game is really akin to the gladiatorial contests in pagan Rome, he says, and the big-money incentives for this “degradation of the human body” makes the NFL “close to what we call prostitution.”

Indeed, new revelations about the tragic effects of violence in football produced an unexpectedly dark story line in the normally sunny run-up to the Super Bowl. Even President Obama, a die-hard Chicago Bears fan, voiced concern.

Given all this moral ambiguity, Hoffman says, believers who invest theological importance in football, or make icons of Christian players, are taking a big risk.

So what will Hoffman do on Sunday night? Root for whoever is the underdog, he says. “I think there’s something essentially Christian in that. You’re rooting for the person who is down and out — the object of Christ’s Sermon on the Mount.” 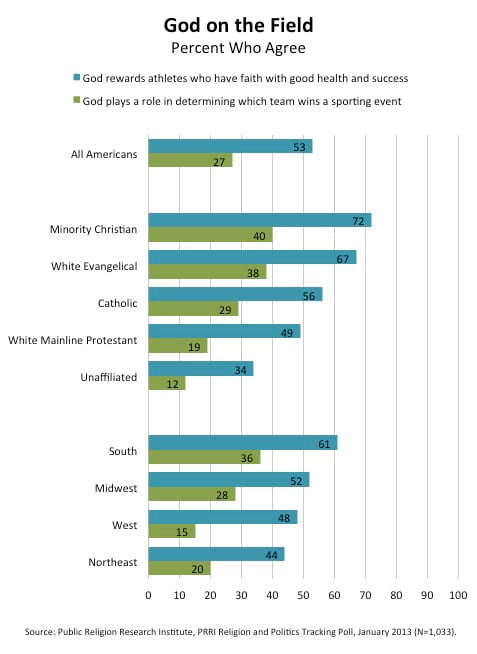 A survey released days before the big game shows that more than a quarter of Americans – and about four in 10 evangelicals – think God will help decide the winner of the Super Bowl. RNS photo courtesy Public Religion Research Institute.