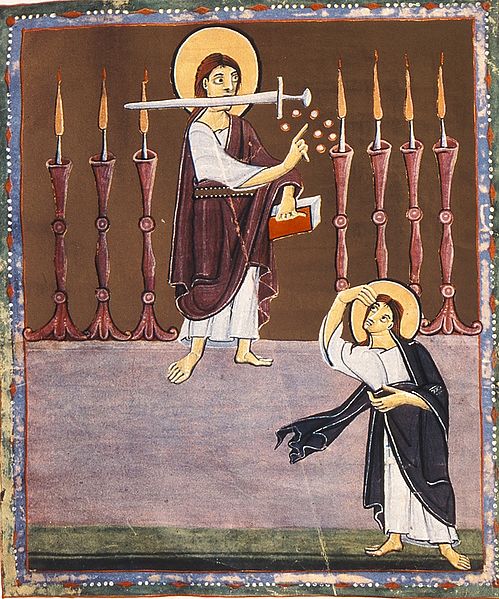 Chill, Christians. In their “DJesus UnCrossed” skit, the folks at Saturday Night Live were merely acting out the New Testament’s own version of a Tarentino revenge fantasy.

If I had to guess, I’d say that one of the writers on SNL was listening to Fresh Air last week when Terry Gross interviewed Yale Bible professor John Collins about his new book on the Dead Sea Scrolls. And here’s what Collins had to say about the image of the Messiah in the first century and how Jesus manifested that image in the eyes of his followers:

Most people wanted a big strong warrior who would drive out the Romans, who would smash heads. So, if you look at this then from the viewpoint of the New Testament, the question is, ‘Why would anybody have thought that Jesus of Nazareth fit that description?’ And actually I think that bothered his followers, too, and if you read the through the New Testament, the answer they come up with eventually is, ‘Well, he wasn’t first time round but when he comes back: watch out.’ And in the Book of Revelation, you know, Jesus comes as a warrior with a sword coming out of his mouth to strike down the wicked and that’s kind of the classic view of the messiah at the time.

11 And I saw heaven opened, and behold a white horse; and he that sat upon him was called Faithful and True, and in righteousness he doth judge and make war.

12 His eyes were as a flame of fire, and on his head were many crowns; and he had a name written, that no man knew, but he himself.

13 And he was clothed with a vesture dipped in blood: and his name is called The Word of God.

14 And the armies which were in heaven followed him upon white horses, clothed in fine linen, white and clean.

15 And out of his mouth goeth a sharp sword, that with it he should smite the nations: and he shall rule them with a rod of iron: and he treadeth the winepress of the fierceness and wrath of Almighty God.

16 And he hath on his vesture and on his thigh a name written, King Of Kings, And Lord Of Lords.

Of course, this isn’t the image of Jesus that has imprinted itself on the minds of most of his followers. But up to and including the sword, the blood-dipped vesture, and the white horse,  SNL’s enactment is canonical as hell.