LOS ANGELES (RNS) Before actress Roma Downey met her husband, her “Touched by an Angel” co-star Della Reese had a bit of advice. 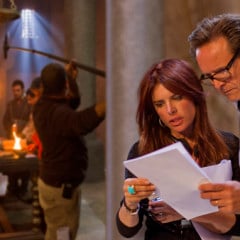 Behind-the-Scenes; Mark and Roma Burnett with the cast and crew on set at the Ouarzazate Museum location. RNS photo courtesy History Channel.

“Baby, you need to pray that God will choose a partner for you,” Downey recalled Reese telling her. “Maybe in the past you didn’t choose so well and you have to let God choose for you. And let your prayer be that you will know him when he gets here.”

So when Downey first spotted Emmy Award-winning producer Mark Burnett in a salon — he was getting a hair cut, she was getting a pedicure — it was a bit more than love at first sight.

“When I met Mark, I had an inner-knowing,” Downey said. “There have been times since then that I can’t help but wonder, if it were for such a time, as this, that we met.”

As they approach their sixth wedding anniversary, the Hollywood heavyweights are sharing their faith with the world in a 10-hour docudrama, “The Bible,” which will air on the History Channel on Sunday nights, starting March 3 through Easter.

The project has received rave early reviews from evangelicals, who are a key part of the film’s marketing plan. Starting with Noah telling the story of creation aboard his ark, the film weaves through biblical epics and the life of Christ and the early apostles.

The series has the special effects Cecil B. DeMille could have only dreamed of when he cast Charlton Heston as Moses in 1956. And it is a decidedly softer, gentler depiction of Christian history than Mel Gibson’s “The Passion of the Christ.”

While they describe “The Bible” as a “love story” between God and mankind, the project is also rooted in their own love story.

Downey has made a number of made-for-TV movies since “Touched by an Angel” wrapped in 2003, and Burnett is an executive producer whose credits include “Survivor,” “Celebrity Apprentice” and “The Voice.” That success has allowed the two to take on “The Bible” project as a personal passion.

“It certainly felt like more of a mission for them than a business opportunity,” said Jim Daly, president of Focus on the Family and an adviser on the series. “They’re doing this as a labor of love.” 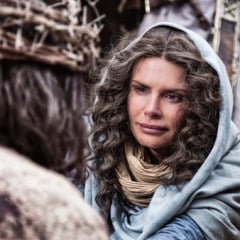 Downey, who plays Jesus’ mother Mary in “The Bible,” is better known for her faith than her husband. She grew up Catholic in a divided Northern Ireland, raised by a devout father after her mother died.

Her performance as the angel Monica on “Touched by an Angel” was genuine, according to Lisa Dolab, who became friends with Downey on the sets of the show. “Roma’s deep faith and love for God shined through her portrayal of Monica,” she said.

“I have tried throughout my career to make choices that are pleasing to God,” said Downey, who attends Mass at Our Lady of Malibu, a Catholic parish. “It probably began in my childhood, wanting to make choices in my life that were pleasing to my own father and by extension to my heavenly Father.”

After “Touched by an Angel,” Downey produced a faith-based DVD and book series for children called “Little Angels.” She also earned a master’s degree in spiritual psychology from University of Santa Monica.

“My whole life I’ve been interested in human behavior,” she said. “I think that perhaps it’s one of the reason I became an actor—to have an opportunity to explore why we do what we do.”

Burnett’s reality television work might be considered a study in human behavior of a different sort. He had been nervous, he said, about how his secular work would be received in churches as the couple traveled around the country to promote “The Bible.” But he found that Christians were excited to talk about his shows.

Entertainment has the power to add or diminish value—or like Burnett’s work, it can be neutral, family-friendly entertainment, Downey said. “I don’t think either one of us have ever been a part of anything that had that negativity.”

In the Bible, Burnett most relates to the Apostle Paul. “I feel like Paul was warrior-like and the least likely person, in many ways, to be called, and it took a person like Paul to go 5,000 miles” to spread the gospel, he said.

During a webinar with church leaders, Burnett urged his fellow Christians to be more like Paul and more aggressive with their message. “This is our story and we have to make some noise,” he said. “If we don’t make some noise, I have news for you: television networks aren’t going to come seeking this kind of programming.” 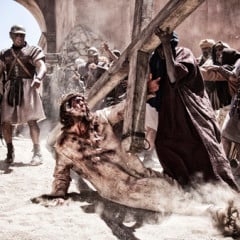 A scene from the 10-hour docudrama, “The Bible,” which will air on the History Channel on Sunday nights, starting March 3 through Easter. RNS photo courtesy History Channel.

Burnett hasn’t always shared his wife’s understanding of the Bible. He grew up in England with a Presbyterian mother and Catholic father, and felt “like the stories in the Bible were very rule-based and probably a little threatening.” With age and Downey’s influence, he has come to see the Bible as a story that shows God’s love for humanity.

“Imagine I married Roma Downey, I married an angel,” he laughed. “You know Roma, and Roma is so gentle and so full of love and kindness and faith.”

They were both previously married—Downey has a daughter and Burnett has two sons from their previous relationships. In 2007, they were married by Reese, who is also a minister. “The Bible” project has spanned three and a half of their six years of marriage.

“Working on this project together,” she said, “has deepened our marriage, our love and our faith.” 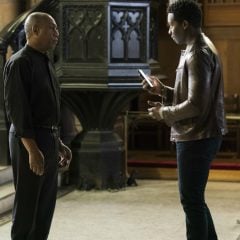 Arts & Culture
A TV God for the age of anxiety 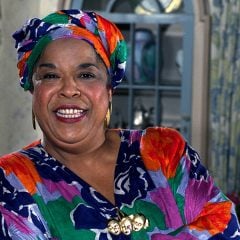 General story
Della Reese, minister and star of ‘Touched by an Angel,’ dies at 86 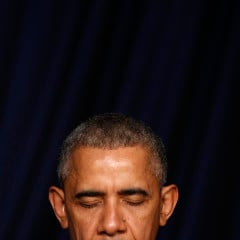 Beliefs
Obama at prayer breakfast: ‘Jesus is a good cure for fear’
Follow us on Facebook!
Submit your photos to RNS