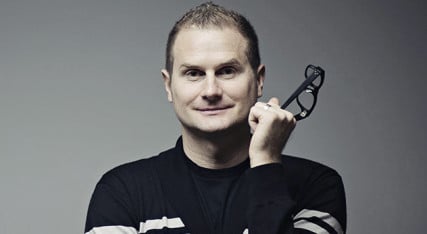 The provocative New York Times bestselling author releases his first book since inciting controversy among Christians with his views on the afterlife.

According to The New York Times, Rob Bell is “one of the most influential Christian leaders in the country.” More than 2.5 million of his Nooma films have been sold, thousands flock to arenas to hear him speak, and he even earned a coveted spot in 2011’s “TIME 100.”

Depending on your theological leanings, Rob’s influence is an occasion for either rejoicing or lamentation. While some claim that he represents the future of American Christianity, others think that his more progressive ideas have strayed so far from orthodox Christianity that they are actually heretical. His 2011 book, Love Wins: A Book about Heaven, Hell, and the Fate of Every Person Who Ever Lived, for example, challenged the notion that those who do not believe in Christ will spend eternity separated from God in hell.

Today, Rob has released a new book titled, What We Talk About When We Talk About God. The text across the back of the book asks, “Will God be left behind?” In it, Rob attempts to survey popular language and ideas applied to God by Christians in light of a culture that is finding those conceptions increasingly irrelevant. Unlike some of his past critics, I read Rob’s new book from cover to cover. I enjoyed many parts of it, while others made me squirm in my seat. Because I am committed to dialoguing with thought leaders across the spectrum of Christianity through “On Faith & Culture,” I took some time to sit down with Rob and discuss his most recent work. The following is part one of my interview:

JM: There is always a lot of pressure after an author experiences that kind of success you did with Love Wins. Sometimes authors don’t know where to go next. Why did you decide that What We Talk About When We Talk About God should be your next book?

RB: You know, for me, it’s always been that there’s way too much in my head and heart to write about.  For me, the problem has never been what I should write about. It’s always been what, of all of these ideas, I should actually give my full energy to.  So, there’s generally four or five books rattling around in there and the ideas that form the backbone of this new book, they’ve been percolating for a while. Generally, I just pick the idea that seems to be the closest to the surface and jump in. If there’s any particular reason, it was probably just a lot of conversations with people where I kept thinking this book could really help.

JM: You talk about God being a bit like Oldsmobiles, something for the past or for then, not now. In your mind, does God change or do humans just learn more about who God has always been?

RB: Yes, I think that we are, as humans, endlessly learning and growing in our awareness of the God who has always been there. So B, in your two options.

JM: Though you believe the Enlightenment was a good thing in some ways, you say, “as reason and logic became more and more prominent, other ways of knowing became less emphasized.” What are other ways of knowing, other than the intellect, that you think have been lost among Christians and need to be recovered?

RB: I wasn’t specifically writing about Christians there.  I was writing about those of us in the Western world as a whole. But I might answer by pointing to the enduring power of music and how people will talk about an album that really got them through a tough time or a song that really spoke to them and the lyrics have almost nothing to do with that person’s life situation. You know what I mean? There’s this sense in which that music really spoke to them powerfully.

Often times, knowledge bypasses this sort of ridged, rational analysis that we are so used to running everything through, and it speaks right to our hearts. There’s something beautiful, and it inspires us, and yet when asked to articulate why, we end up talking about how we like the colors or we like the shape or we like the form of that sculpture. I think that would be an example in which there is truth, but it is not in a rational, logical, unfolding linear sort of way.

JM: There is a discussion in your book about the importance of language in how we talk about God. You say, “An image of God doesn’t contain God, in the same way a word about God or a doctrine or a dogma about God isn’t God. It only points to God.” You specifically mention gender, and I think the discussion of gendered language will be a sticking point for some because male conceptions of God are deeply embedded into the Christian scriptures and tradition. How do you believe Christians need to speak about and think differently when it comes to God and gendered language?

RB: Language is just that. It’s language. It’s not the reality, but just the words we use. I think it is important that Jesus uses this phrase often: “the kingdom of God is like.” And the word “parable” means “to place alongside of.” So it is taking language and placing it alongside of something in order to better access it.

I think it goes back to this Jesus story being just that, a powerful story rooted in actual space, time, and history. So the people who were telling it and interacting with it and anticipating the coming of Jesus and then working through the implications of the cross and resurrection, they were real people in real places in real time. They put all of this in language that their listeners and readers could understand. So what does it look like for us now to put this in our own language that the world around us can resonate with?

RB: Well, you certainly have Isaiah using a mother image for God and Jesus talks about longing to gather like a mother hen gathers her chicks. But that is a great question, and one we should be asking.

JM: A major point in your book is that God is ahead of us, drawing us and calling us forward to a better future. You talk about this in terms of “the divine pull.” What do you mean by this?

RB: I tell a story about my friend who is a comedian who dressed up like a priest and went to a comedy club. He made this fake confessional wall out of cardboard, and he goes up on stage and asks if anyone wants to make a confession. And people actually did. Like, at a comedy club on a weekend night. And they weren’t joking around. People had serious things to confess. I simply point out that there is something within us, a draw or a pull to tell our secrets or vomit up the dark things that reside within us. In the scriptures, this is called “God.” God is the one who is drawing us and pulling us and calling us and inviting us to live as integrated and whole beings.

My experience as a pastor is that we often have these urges—the urge to tell the truth, the urge to give something away, the urge to forgive. In the Christian tradition, this is called the Spirit of God that is calling all of us, inviting all of us to be everything we were made to be. When we listen to that, extraordinary things happen.

JM: Some on the right of Christianity say that your last book made you irrelevant, and this book will only make you more so. Others on the left counter that you represent the future of the Christian faith. Where do you see yourself and your thinking in terms of where American Christianity is heading? Do you think you’re the future mainstream?

RB:  I have no desire to comment on where I am in all of this. Someone else can do that. I think that the things I write and talk about, I’ve seen again and again how this represents how lots and lots of people think about faith. So there are these moments in history where things shift and lots of people say, “The thing that we were handed doesn’t work for us. It’s no longer where the life is. But here, with these understandings, is where we’re finding Christ. So we’re going to go this way.” Lots of people are doing that, and I’m thrilled to be a part of it.

Posted in
Beliefs Culture On Faith and Culture Opinion

News
The COVID-19 books have arrived: From Pope Francis, John Piper, N.T. Wright and more
News
Lecrae on growing uncomfortable with white evangelicalism and finding ‘Restoration’
Signs of the Times
Amy Coney Barrett’s religion is important but irrelevant
News
In Oregon, churches and anti-fascists unite to provide mutual aid to fire evacuees and others in need
News
How interfaith activism helped Saadia Faruqi change the face of children’s books