TORONTO (RNS) Liked the show? You should try reading the book.

That’s the message the Church of Jesus Christ of Latter-Day Saints is sending in three full-page advertisements in the playbill of the stage musical “The Book of Mormon.” 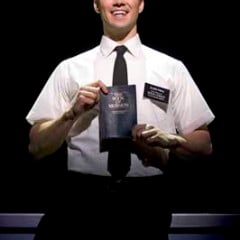 “The Book of Mormon,” opens on March 24. Somewhat surprisingly, the satirical musical is getting rave reviews from Mormons. Religion News Service file photo by Joan Marcus.

The hit show, already sold out for its run at Toronto’s Princess of Wales Theatre from April 30 through June 9, was co-written by “South Park” creators Trey Parker and Matt Stone, along with Robert Lopez, who also helped write the similarly irreverent “Avenue Q.”

The occasionally blasphemous musical, which won the Tony Award for best musical in 2011, follows two hapless Mormon missionaries who are dropped into a remote village in Uganda to evangelize the locals.

The Mormon church, which had no involvement in the show’s creation, bought ads in the upcoming Toronto production’s program. The ads include a link to the church’s website, thebookofmormon.org, and a QR code that connects smartphone users to more online information.

“The book is always better,” reads one of the ads.

Sandra Pallin, a spokeswoman for the church in Canada, told the Toronto Star that most people who see the musical understand they are not seeing an accurate portrayal of Mormon belief, much less a realistic depiction of the Mormons’ sacred text.

“The playbill advertisements are really just a way of inviting people that want to know more, showing them where they can get that information … that there is accurate information available at these different resources, and those are provided in the playbill,” said Pallin.

While the church bought billboards in Time Square to capitalize on the show’s popularity, the church has taken a mostly passive approach to the satirical musical.

“The production may attempt to entertain audiences for an evening,” a church statement said in February 2011, “but the Book of Mormon as a volume of scripture will change people’s lives forever by bringing them closer to Christ.”