DUBLIN, Ireland (RNS) Ruth Bowie was in the throes of grief when she found out she would never know her unborn child. At the 12-week mark, a pregnancy scan showed the baby had anencephaly, a fatal condition in which a portion of the brain and skull never form. 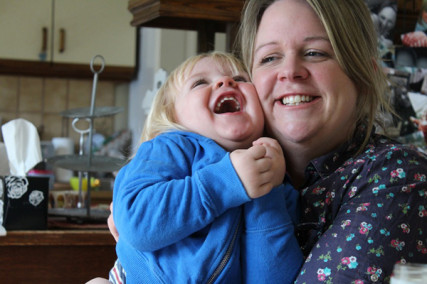 Ruth Bowie with her son, Dougie. Bowie was in the throes of grief when she found out she would never know her unborn child. At the 12-week mark, a pregnancy scan showed the baby had anencephaly, a fatal condition in which a portion of the brain and skull never form. RNS photo by Sarah Parvini

Bowie, 34, a pediatric nurse, knew the implications of the birth defect even before the doctor explained. But the life-changing news didn’t stop there.

“The doctors said we will continue to look after you, or else you can choose to travel,” she recalled.

Put another way, if she and her husband wanted to seek an abortion, they would have to travel to England to end the pregnancy.

Ireland’s stringent abortion laws made it impossible for her to terminate the pregnancy in her home country— and she refused to give birth to a child who had no chance of surviving outside the womb.

Her husband, Michael O’Shea, supported her decision and flew with her to the U.K., though he was terrified of telling his devout Catholic parents. When O’Shea and Bowie returned to Dublin, he told them she had a miscarriage. It wasn’t until his wife went public with her story last year that he told them the truth.

Bowie’s experience highlights the struggle between religious morals and secular rights in what was once considered the most Catholic country in the world. Under Irish law, abortion is legal only if the mother’s life is at risk.

“You give me news that the baby we very much want is going to die, and now I have to go to another country,” Bowie said. “It’s like kicking you when you’re down.” Michael O’Shea supported his wife’s decision to terminate her pregnancy and flew with her to the U.K., though he was terrified of telling his devout Catholic parents. RNS photo by Sarah Parvini

“Current policy is adding to a sense that they have to sneak around, and adding to what is a very difficult situation,” said Sinead Ahern of the reproductive rights group, Choice Ireland.

Most European countries allow abortion on demand during the first trimester, but in Ireland, where there is still a palpable struggle between Catholic influence and an increasingly secular state. In many ways, the fight over abortion reflects the growing friction between the two sides.

Activists from the United States have poured hundreds of thousands of dollars into Ireland’s anti-abortion lobby in the belief that it is Western Europe’s last line of defense in the fight to protect the unborn.

Those lobbies are equally vocal in the U.S., where North Dakota lawmakers recently approved a bill that would ban abortions as early as six weeks into pregnancy. It would be the earliest ban in the nation.

Despite interest groups’ push to keep Ireland’s abortion policy intact, the Irish government said it would reform the country’s controversial rules by the end of July. Activist Evelyn Fennelly believes that is a step in the wrong direction.

“Whether a life is short or whether a life is long, it’s no less valuable,” said Fennelly, 21, a member of the Pro Life Campaign in Dublin. “What matters is how we honor those lives.”

A nonpracticing Catholic, Fennelly represents a contingent of Irish women who see abortion as a human rights issue and not just a religious debate.

Others say women should have the right to choose what to do with their bodies. Ruth Bowie and her husband Michael O’Shea  (pictured here with their son Dougie) had to travel to England to seek an abortion. RNS photo by Sarah Parvini

“(We) would like to see Ireland adopt the Canada model,” said Dr. Mary Favier, a general practitioner and founder of Doctors for Choice in Ireland. “Each procedure would be handled on a case-by-case basis, with the decision made by the woman and her medical doctor.”

Bowie, who was raised in a devout Protestant household, was taught that abortion is immoral in all cases. Now that she has been through the gut-wrenching experience herself, her parents are more understanding of subtleties in the debate, she said.

The conversation resonates throughout the country and permeates its religious communities. The Protestant minority in Ireland is typically aligned with Catholics on abortion, though they are perhaps less visible.

Despite her hardships, Bowie describes herself as a woman of “strong faith.” She takes issue with Ireland’s abortion policy, not her religion, and thanks God for her healthy two-year-old son Dougie, who helps fill the void left by the child she lost.