VATICAN CITY (RNS) Pope Francis on Thursday (March 28) washed the feet of 12 young inmates, including two girls and two Muslims, during a Maundy Thursday Mass at a youth detention center in Rome.

The Argentine pontiff, who has shown an eagerness to break with tradition in the two weeks since his election to the papacy on March 13, chose to celebrate the rite in the Casal del Marmo prison in northwest Rome, rather than in the traditional venue of the St. John Lateran Basilica. 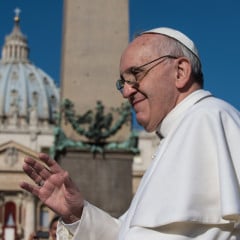 Francis has repeatedly stated his desire to bring the papacy and the church closer to the poor and the marginalized.

The inclusion of two women in the rite — which commemorates Jesus’ washing of the feet of the apostles on the night before his death — is also a first for a pope, but Francis had already done so as archbishop of Buenos Aires.

As all of Jesus’ apostles were men, popes usually washed the feet of 12 male priests. Outside the Vatican, many bishops will wash only the feet of men.

In a brief, unscripted homily, Francis explained that the foot-washing ceremony exemplifies Jesus’ message that men — including those in positions of power and authority — must be in service of each other.

“Among us, who is above must be in service of the others,” he said. “This doesn’t mean we have to wash each other’s feet every day, but we must help one another.”

Media access to the youth prison was limited since most inmates are minors, but the Vatican’s chief spokesman, the Rev. Federico Lombardi, reported that Francis knelt in front of the 12 youths and kissed their feet after having washed and dried them.

“It was an impressive gesture,” he said, adding that it was also “physically taxing.”

After the Mass, the pope personally greeted all the inmates as well as the prison’s staff and volunteers. “Do not let yourselves be robbed of hope,” he told the young offenders before leaving.

Earlier on Thursday, at a solemn Mass in St. Peter’s Basilica that marks the beginning of Easter celebrations for the Catholic Church, Francis called on priests to avoid becoming “managers” and “collectors of antiques or novelties.”

He urged them to “go out of themselves,” into the “outskirts where there is suffering, bloodshed, blindness that longs for sight, and prisoners in thrall to many evil masters.”