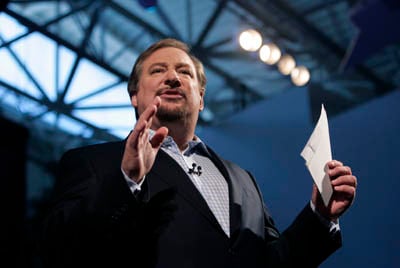 Pastor Rick Warren greets the audience before a forum with the presidential nominees at his Saddleback Church on Aug. 16, 2008. Religion News Service file photo by Ann Johansson.

In the days since, uncounted strangers have joined the 20,000 congregants who worship at the megachurch network “Pastor Rick” built in Southern California, Warren’s nearly 1 million Twitter followers and hundreds of thousands of Facebook followers in flooding social media with consolation and prayer.

“Kay and I are overwhelmed by your love, prayers, and kind words,” Warren tweeted on Sunday. “You are all encouraging our #brokenhearts.”

But a shocking number are taking the moment of media attention to lash out at Warren on their digital tom-toms. The attacks are aimed both at him personally and at his Christian message.

Some unbelievers want to assure Rick and Kay Warren, his wife and Matthew’s bereaved mother, that there’s no heaven where they’ll meet their son again.

“Either there is no God, or God doesn’t listen to Rick Warren, despite all the money Rick has made off of selling false hope to desperate people,” one poster from Cincinnati wrote in to USA Today.

In another comment, the same poster counsels Warren to “abandon primitive superstitions and accept the universe for what it is — a place that is utterly indifferent to us.”

Some rush to add pain to the Warrens’ world because, in their view, he did not show sufficient compassion for the unremitting pain suffered by gay youths rejected by parents and peers. They were outraged when Warren took a political stand for Proposition 8, which overturned legal same-sex marriage in California in 2008 and is now before the U.S. Supreme Court.

Others have appointed themselves 140-character theologians in a debate over whether someone once saved can lose his or her salvation if suicide is against God’s law. These posters, rather than waiting for Judgment Day, have ruled for hell.

But Bruce Kwiatkowski of the University of Toledo posted on Facebook: “I appreciate what Pastor Ronald Cole said about the subject of Christian suicide. He said the Lord will say, ‘We weren’t expecting you yet…’ ”

John Schuurman observed on Facebook that celebrity culture makes everyone “fair game” and the anonymity afforded by social media allows people to “send out hate flames without any consequence.”

There are, however, people who won’t let the vitriol unleashed on social media infect the little corners of the world under their own name.

Facebook user John H. Armstrong fought back, saying, “I just blocked someone that I do not know from my wall for saying that Rick Warren’s son went to hell. What is it with people being so sure that they know God’s final judgment? I fear for people like this. This man added that Rick Warren was being judged for being a ‘false prophet.’ Pathetic, cruel and reckless all come to mind. If I’ve seen the evidence of a false prophet this comes close.”

The day after his son died, Warren tweeted to his more than 943,000 followers: “We pray ‘Thy WILL be done on earth AS IT IS IN HEAVEN’ since in heaven God’s Will is done #always. On earth, it’s done rarely.”