WASHINGTON (RNS) A coalition of evangelical leaders who hope to shape national immigration reform is expressing cautious optimism about a bill a bipartisan group of senators introduced in Congress. 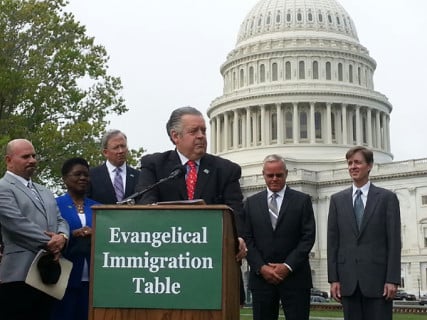 A coalition of evangelical leaders aiming to shape national immigration reform is expressing cautious optimism over a bill a bipartisan “Gang of Eight” senators introduced in Congress Wednesday (April 17). Richard Land (center), public policy director for the Southern Baptist Convention, said the new bill meets a major criterion of many in the evangelical community, in that it is not an “amnesty” bill, but would require undocumented immigrants to work toward American citizenship. RNS photo by Caleb Bell

Richard Land, the public policy director for the Southern Baptist Convention, said the new bill passes the biggest hurdle for many evangelicals by not allowing “amnesty” but would instead require undocumented immigrants to work toward American citizenship.

“It provides an earned pathway to full legal status and then to citizenship for those who want it,” Land said Wednesday (April 17). “That is not amnesty in any dictionary in the English language.”

The tentative evangelical endorsement of the Senate blueprint could be key because more than any other religious group, white evangelicals harbor the most reservations about opening citizenship to immigrants in the U.S. illegally, according to a recent survey by the Public Religion Research Institute.

Members of the Evangelical Immigration Table coalition came together last June on the premise that evangelicals’ experience with immigrants in their own parishes calls them to action as lawmakers try to forge a new immigration reform law – an elusive goal that suddenly seems possible in Washington.

The Rev. Gabriel Salguero, a member of the group and president of the National Latino Evangelical Coalition, said the current push from evangelicals on immigration is unprecedented in its wide range of participating denominations.

“As evangelical leaders, we live every day with the reality that our immigration system is broken, and it’s not working,” Salguero said. “And it doesn’t reflect the values of human dignity and the respect for the rule of law that defines us as evangelicals and defines us as Americans.”

Coalition members stopped short of actually backing the new immigration bill — which requires more secure borders before new paths to citizenship open for those in the country illegally — but left the door open if its final version reflects their principles.

Among other values, the bill should respect the integrity of U.S. borders, keep families intact and protect “the God-given dignity of every person,” they said.

Members of the coalition include World Vision, the National Association of Evangelicals, Sojourners, and the National Hispanic Christian Leadership Conference.

Though immigration reform remains a tough sell in some corners of Capitol Hill, support from generally conservative evangelicals bodes well for the newly introduced bill, which has also drawn praise from President Barack Obama.

”This bill is clearly a compromise, and no one will get everything they wanted, including me,” Obama said. “But it is largely consistent with the principles that I have repeatedly laid out for comprehensive reform.”

According to the Pew Research Center for the People & the Press, 71 percent of Americans believe immigrants who live in the U.S. illegally should be allowed to stay.

They are divided, however, on whether immigrants should be eligible for citizenship. According to the PRRI study, majorities of all major faith groups support legalization “provided they meet certain requirements,” including more than seven in 10 Hispanic Catholics and Protestants, two-thirds of Jews, more than 60 percent of Mormons, white Catholics and white mainline Protestants, and 56 percent of white evangelicals.