Cardinal Timothy Dolan of New York, president of the U.S. Conference of Catholic Bishops, has said talks with the White House over a proposed contraception mandate are "going nowhere." RNS photo by Gregory A. Shemitz.
April 22, 2013
David Gibson

(RNS) Leading U.S. Catholic bishops on Monday (April 22) denounced efforts to use the Boston Marathon bombings to derail the push for immigration reform, saying it is wrong to brand all immigrants as dangerous and that a revamped system would in fact make Americans safer. 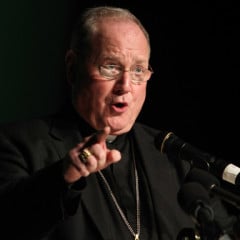 “Opponents of immigration … will seize on anything, and when you’ve got something as vivid and as recent as the tragedy in Boston it puts another arrow in their quiver,” New York Cardinal Timothy Dolan (pictured here), president of the U.S. Conference of Catholic Bishops, told reporters. RNS photo by Gregory A. Shemitz.

“Opponents of immigration … will seize on anything, and when you’ve got something as vivid and as recent as the tragedy in Boston it puts another arrow in their quiver,” New York Cardinal Timothy Dolan, president of the U.S. Conference of Catholic Bishops, told reporters.

“To label a whole group of people – namely, the vast population of hard-working, reliable, virtuous immigrants – to label them, to demean them because of the vicious, tragic actions of two people is just ridiculous,” he said. “Illogical. Unfair. Unjust.”

Dolan was joined on the conference call by Archbishop Jose H. Gomez of Los Angeles and Bishop John C. Wester of Salt Lake City, both top spokesmen for the bishops on migration, in pushing for passage of a landmark immigration reform bill introduced in the Senate last week.

In the wake of the April 15 attacks and the identification of two young men of Chechen origin as the suspects, some conservative politicians have argued that immigration reform should be put on the shelf.

Immigration reform advocates counter that having a better, more comprehensive system would have enabled authorities to maintain better records on immigrants like Tamerlan Tsarnaev, 26, who was killed after a shootout with police, and his brother Dzhokhar Tsarnaev, 19, who remains hospitalized.

On Monday, Dolan and the other bishops said that arguments against immigration based on the Boston attacks smacked of the anti-Catholic nativism of the 19th century that used violence by groups like the Molly Maguires to justify barring all Irish immigrants, and Catholics across the board.

That history of religious bias is also why the bishops are especially sensitive to efforts to brand all Muslims as suspect.

“They are going through now what we did in the 1840s and 1850s,” said Dolan, a student of church history. “Whenever a group is painted with a wide brush we begin to bristle.”

The bishops held the briefing in part to lobby for changes to the Senate bill; among other things, the USCCB wants more immigrants to be eligible for assimilation than the current bill allows, and they want to reduce the waiting period to obtain a green card or apply for citizenship. 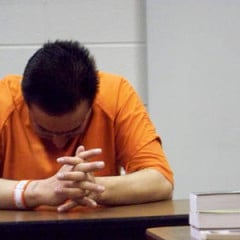 A detainee prays at the McHenry County Correctional Facility in Woodstock, Ill., where more than half of the inmates are being held on immigration violations. Religion News Service photo by Gregory Trotter

But the bishops also said they were political realists and know that they will be fortunate if some version of the current bill is passed. Dolan said he had spoken earlier Monday with New York Sen. Charles Schumer, a Democratic leader of the bipartisan “Gang of Eight” that crafted the bill, and they are working together despite differences on other issues to get the legislation passed.

The bishops said they are convinced that despite the potential Boston blowback and the nation’s history of anti-immigrant sentiment, Republicans learned from last November’s election results that they cannot alienate Latino voters and still hope to win at the ballot box.

“The political winds, the political will, is aligning to do this in a comprehensive way, which we believe is the best way to do it,” said Wester.

Related Posts
By Jim Wallis, Sandy Ovalle
Savor and strategize: The SCOTUS decision to protect DACA
By Marlena Graves
We reversed Trump’s immigration policy once. We’re back to fight ‘Remain in Mexico.’
By Alejandra Molina
Who is Junipero Serra and why are California protesters toppling statues of this saint?
By David Crary
Amid pandemic, scores of US Catholic schools face closure
By Alejandra Molina
Four young people of different faiths move into a home together, then a pandemic happens