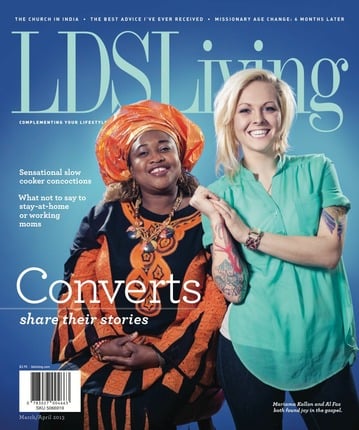 Al Fox, the “Tattooed Mormon,” appeared on the cover of the March/April issue of LDS Living. (Magazine on sale at http://tinyurl.com/njhv6b)

There’s been a good deal of  media buzz lately about a charming young convert who joined the LDS Church several years ago. Al Fox wasn’t sure why God had called her to Mormonism, or why she felt a pull to move to Utah when many people warned her about the social judgments that she, as someone sporting armfuls of tattoos, might face all along the Wasatch Front.

And on her very first day, standing in line at Cafe Rio in SLC (which, if you haven’t been there, you should try), that kind of judgment happened. She was holding a biography of an LDS prophet while waiting in line to order, and a guy remarked on the irony that she of all people should be reading that of all books, given the way she looked.

She wanted to cry out to him: Did he have any idea what it had cost for her to convert? Could he even imagine the difficult road she’d taken to get to Utah? And there she was, practically still dripping from her recent baptism, and he felt free to judge her.

The way she chose to handle it was probably far more mature and spiritually wise than such a comment deserved:

I turned to this man in Café Rio. Introduced myself. Shook his hand. I smiled so big and simply said, “I just got baptized, this is my first day here!” I said it with happiness. I said it with pride. With confidence.

However, I don’t think that the burden of spiritual maturity should have been on her shoulders in the first place. No, that burden rests with those who who’ve had access to what Mormons call “the restored gospel” all their lives, who have gone to seminary, served a mission, learned the scriptures . . . and who choose to ignore Jesus’ regular refrain about not judging.

In my emails from readers I seem to get several notes a week from Mormons and ex-Mormons who have stories to tell about being judged. Some of these stories break my heart.

The ones that hurt in particular are from bright young 20somethings and 30somethings who have left the Church. Their reasons for doing so (at least among the ones who contact me) seem to fall into three basic categories:

What I find among many orthodox and active Latter-day Saints is a stubborn refusal to take any responsibility for these young people’s pain.

“Oh, they’re just choosing to be offended,” seems to be a common response.

But how many times do we need to blame the victim before Mormons as a people realize that  judgmentalism is a sin whose wage is death? How many young adults do we need to lose before we admit there is a problem?

Over at the FMH blog this week, there’s an interesting discussion about the stagnation of LDS growth in the U.S. and Europe. The widely divergent research on LDS growth or non-growth is a topic for another blog post, but for our purposes here we can at least verify that LDS growth in the U.S. has slowed significantly from the halcyon days of the 1980s, and that many of the people who are officially counted as Mormon no longer self-identify as such.

And that loss is not “their” problem. It is not even the Church’s problem. It is a problem of the body of Christ. (See 1 Cor. 12:21-23) That body is lesser for their absence; there is a phantom limb that ought to be there.

Don’t get me wrong. There are very legitimate reasons why people leave Mormonism, and some of those decamping are going to be out the door no matter what other members do or do not say.

But judgmental comments should never be one of the reasons for their departure.