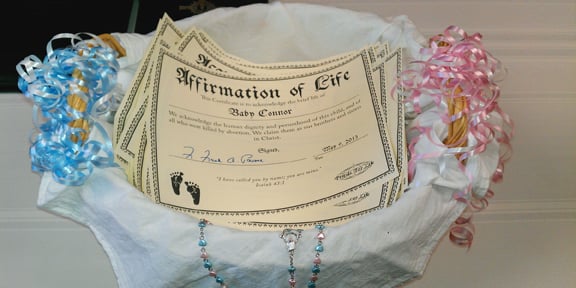 The Rev. Frank Pavone of the anti-abortion group Priests for Life dedicated a basket of naming certificates for 47 babies who died in the Philadelphia clinic of Dr. Kermit Gosnell. RNS photo courtesy Andre Kim/Priests for Life.

In May, Gosnell was convicted on three counts of first-degree murder. He waived his rights to appeal but has 30 days to reconsider his decision.

Once the appeal period is over, on Saturday (June 15), the city will follow its normal procedures by conducting cremation and burial, city spokesman Mark McDonald said. McDonald did not have information on when it would take place.

After Gosnell’s arrest in 2011, then-Archbishop Cardinal Justin Rigali petitioned the district attorney’s office for the bodies of those aborted. The bodies were being retained for the trial, but after it ended and Gosnell was sentenced to life in prison, Rigali’s successor, Archbishop Charles Chaput, renewed the request to bury the bodies.

Francis Maier, special assistant to Chaput, said no city officials contacted the archdiocese with a status on what they planned to do with the bodies. Maier said officials in the DA’s office and medical examiner’s office have not responded, but he assumes someone will.

“I’m in the dark about what’s going on,” he said. “We’ve repeatedly tried to no avail.”

The case drew attention from across the country with the gritty details about Gosnell’s clinic. Investigators found bodies stuffed in cat litter, bags, boxes and juice containers. Prosecutors charged that Gosnell would routinely perform late-term abortions and use scissors to puncture the spines of babies born alive.

The Rev. Frank Pavone, a Catholic priest who heads New York-based Priests for Life and who was also among those requesting the bodies, performed a service in May to give proper names to the dead babies.