(RNS) Paintings and sculptures of what may be the most iconic scene in the history of art — the crucifixion of Jesus — are no longer commanding the auction prices they once did.

While it’s common for individual works to occasionally sell for less than they are worth, consider:

Even images of Crucifixions by established masters can be purchased on the cheap, said Joaneath Spicer, curator of Renaissance and baroque art at The Walters Art Museum in Baltimore. Spicer hasn’t purchased Crucifixions for the museum in some time.

In part, she said, Christian art has become the victim of its own success. 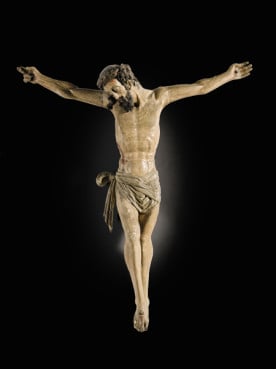 “If I want more Crucifixion bronzes, there are some in storage that are quite nice,” she said.

But there are other cultural factors that may be contributing to the declining sales prices. One of them may be changing worship styles that rely more on words and music and less on visual images. A bigger one may be an unwillingness to openly and publicly display one’s religious commitments.

“The de-emphasis on art as part of the devotional experience within the Catholic Church surely has had some impact on this,” said Spicer.

Catholics are also less likely to display religious art in their homes, said Eike Schmidt, curator of decorative arts and sculpture at the Minneapolis Institute of Arts.

“Wealthy Catholics nowadays, in general, do not seem to be particularly ambitious to crown their art collections with an outstanding crucifix or a painted Crucifixion,” said Schmidt, a former Sotheby’s London department head. “House-altars have become a rarity.”

The interiors depicted in architectural magazines and furniture sales catalogs today tend to be devoid of any religious iconography, “with the odd exception of mass-produced Buddha heads, which I suspect have very little to do with Buddhist theology and practice,” Schmidt added.

James Martin, a Jesuit priest and editor at large at “America” magazine, agrees that Catholics are less likely to adorn their homes with Sacred Hearts or crucifixes.

“People are less comfortable with displaying their piety on their walls for fear of offending people because we live in a less religious culture all around,” he said.

At a time when prosperity teachings are especially popular, people don’t relate as much to Christian concepts of sin and suffering.

And for non-Christians, the image of the suffering Jesus can be particularly troubling.

“If you’re not religious, the image of a person nailed to a cross is probably very uncomfortable,” Martin says. “It’d be like getting an image of a man strapped to an electric chair.”

With a rising Asian market for art, it’s not surprising many buyers are turning their backs on Christian imagery.

“I have seen museum visitors from India and China to be surprised and appalled by the depiction of a man who dies from torture, and moreover to be told that this is the central image and at the theological core of a world religion,” said Schmidt, the Minneapolis Institute of Arts curator.

Despite their lack of comfort with religious art, collectors are looking for direct images that strike an emotional chord. For many collectors, that means contemporary art, such as works by Andy Warhol, but that kind of directness is displayed in works by the Old Masters, many of which are religious, as well.

“The Old Masters field in general — while some of the prices have hit astronomical levels, which is terrific — is undervalued,” said Margi Schwartz, senior vice president and head of the European sculpture and tapestry department at Sotheby’s.

“It’s a supply and demand issue,” she added. “And as we feel that squeeze, I think there will be more and more collectors realizing that they’d better get in there, because there are not a lot of opportunities to find things. This art is not being made any more.”

News
Cardinal Laurent Monsengwo Pasinya, Congolese cleric and statesman, dies at 81
Follow us on Facebook!
Submit your photos to RNS