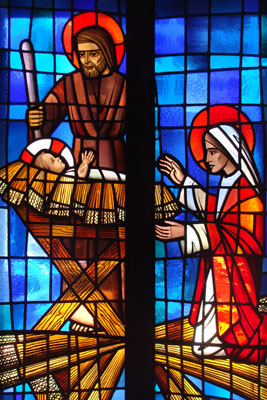 Pope Francis has signed off on a small but significant change to the Roman Catholic Mass, which goes into effect immediately. In short, St. Joseph is now getting equal billing with the Virgin Mary in the priest's prayers at Mass.

From the U.S. Conference of Catholic Bishops:

The decree, Paternas vices (Fatherly care), was issued May 1 by the Congregation for Divine Worship and the Discipline of the Sacraments and promulgated by the authority of Pope Francis. St. Joseph has been included in the first Eucharistic Prayer since Pope John XXIII inserted his name in 1962. The new decree extends the inclusion of St. Joseph to Eucharistic Prayers II, III and IV.

(For you non-Catholics out there, priests use a variety of authorized prayers when they are blessing the Eucharist, or the bread and wine used at Communion)

Here's what will be added to the priest's prayers, courtesy of the Rev. Daniel Merz of the USCCB's Secretariat of Divine Worship:

Eucharistic Prayer II:
Have mercy on us all, we pray,
that with the Blessed Virgin Mary, Mother of God,
with blessed Joseph, her Spouse,
with the blessed Apostles,
and all the Saints

Eucharistic Prayer III
so that we may obtain an inheritance with your elect,
especially with the most Blessed Virgin Mary, Mother of God,
with blessed Joseph, her Spouse,
with your blessed Apostles and glorious Martyrs
(with Saint N.: the Saint of the day or Patron Saint)
and with all the Saints

Eucharistic Prayer IV
that we may enter into a heavenly inheritance
with the Blessed Virgin Mary, Mother of God,
with blessed Joseph, her Spouse,
and with your Apostles and Saints in your kingdom.

More background from the USCCB:

St. Joseph is widely venerated in the Catholic Church. In 1870, Pope Pius IX proclaimed him Patron of the Universal Church, a feast celebrated on March 19. The Vatican’s decree says that St. Joseph “stands as an exemplary model of the kindness and humility that the Christian faith raises to a great destiny, and demonstrates the ordinary and simple virtues necessary for men to be good and genuine followers of Christ.”

Related Posts
By Alejandra Molina
Who is Junipero Serra and why are California protesters toppling statues of this saint?
By David Crary
Amid pandemic, scores of US Catholic schools face closure
By Alejandra Molina
On LA’s Skid Row, Catholic Worker’s ‘Hippie Kitchen’ adjusts to COVID-19
By Bill Baker
A conversation with Father James Martin: 'Why did God let this happen?'
By Emily McFarlan Miller
Paczki Day brings Chicagoans together for one last indulgence before Lent