(RNS) Imam Dayaiee Abdullah never knows how many people are going to show up for Friday prayers.

Some weeks, nearly a dozen men and women gather at a Quaker hall in northwest Washington, D.C., where they kneel on prayer rugs laid out to transform the room into a Muslim place of worship.

Other weeks, Abdullah, a convert to Islam, sits alone. 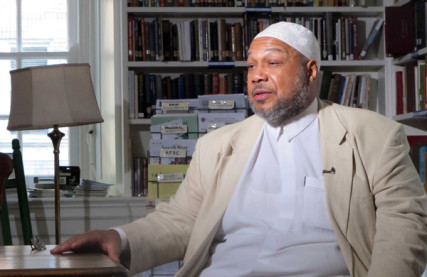 Imam Dayaiee Abdullah is said to be the only gay imam in North America. Photo by Krista Kapralos

He may be the only openly gay imam in the world, and he formed Light of Reform mosque more than two years ago so people like himself could worship without fear.

The mosque is one of just a few in the world where openly gay Muslims are welcome, but even there, lesbian, gay, bisexual and transgender people fear harassment, and often stay away.

“There’s been a lot of hate speech,” Abdullah said. “I’m doing the work they refuse to do,” he added, referring to other imams.

Life is changing for gay Muslims, even if the changes seem infinitesimally small. A gay-friendly mosque opened near Paris last year. A lesbian Muslim couple from Pakistan married in a civil service this year in England.

Western Muslims are leading the push for inclusiveness, said Ani Zonneveld, president of Muslims for Progressive Values, for which Abdullah serves as director of LGBT outreach.

Abdullah provides wedding ceremonies for gay Muslims and interfaith couples. He also offers counseling (available via Skype for gay Muslims living in countries where homosexuality is not tolerated), and weekly prayer services where men and women kneel side by side.

But while Abdullah calls his mosque “progressive,” Imam Muzammil Siddiqi, a prominent Muslim leader based at California’s Islamic Society of Orange County, calls it “unacceptable.”

No legitimate imam will officiate at a same-sex wedding, Siddiqi said.

Muslim leaders in the D.C. area don’t like to talk about Abdullah’s mosque or the weddings he celebrates. Most publicly oppose gay unions.

Across the nation, some have begun to speak out. U.S. Rep. Keith Ellison, D-Minn., and Rep. Andre Carson, D-Ind., both Muslims, advocate for gay rights.

Word of Abdullah’s mosque has spread quickly in recent months. He’s given interviews to newspapers, magazines and television programs around the world. All the publicity has brought him more work.

Over the past 13 years, he said, he’s officiated at 50 weddings. This year, he expects to be asked to do eight or more. He supports himself through fees he collects for lectures, counseling and, of course, weddings, which can run up to $2,500 and more, if it requires travel.

“People are understanding that they have the right both from a spiritual and from a legal aspect to fulfill those dreams,” he said.

Discretion is a major element of the gay Muslim community. Online, most gay Muslims keep their identities well hidden, but at Abdullah’s mosque, publicity has trumped anonymity. One recent Friday, reporters outnumbered worshippers five to two. One man appeared askance when he saw a television crew in the prayer room. Both worshippers declined to speak with reporters.

In the early years, Abdullah said, reporters occasionally asked to speak with same-sex couples for whom he’d performed weddings, and those couples shared their stories. But now, he said, they avoid the limelight.

“They’ve been asked too many times,” Abdullah said.

There are about 2.6 million Muslims in the U.S., according to a 2010 Pew Forum on Religion and Public Life poll, but it’s not clear how many are gay. Eight in 10 homosexuals say Islam is one of two religions most unfriendly toward them (the other is Mormonism), reports the Pew Research Center.

Abdullah was 8 years old when he told his Southern Baptist parents he didn’t want to attend their church. It was the early 1960s, and his parents encouraged open discussions about religion and civil rights.

He converted to Islam when he was 29. He was in China studying Mandarin when he met Uighur Muslims who taught him about Islam. Uighurs have long faced persecution in China for their religion.

“I asked them, is it haram to be Muslim and gay?” he said, using the Islamic reference for “forbidden.” “They said no.”

Abdullah said he’s in a long-term relationship and doesn’t have any immediate plans to marry.

It’s significant that Abdullah was born in the U.S., said Scott Kugle, a gay Muslim and a religion professor at Emory University. Culturally, Western countries allow more questioning of sexuality than do others, he said. “That doesn’t mean that people from other cultures and regions aren’t questioning it,” he said. “They just do so quietly.”

Abdullah sees his role as that of a pioneer, especially as more people hear about his work and seek him out.