(RNS) The war over abortion is going digital.

Missouri last month joined six other states that have enacted bans on abortion by telemedicine this year. That’s a process in which women take pregnancy-ending medication that a doctor remotely administers during a video conference.

The practice, available to women in their first nine weeks of pregnancy, is now prohibited in 11 states, according to the Guttmacher Institute, a research group that supports abortion rights.

In Iowa — where telemedicine abortions were pioneered — the Board of Medicine voted in June to effectively shut the practice down, and state legislators have declined to intervene in the dispute. A public hearing before the board is set for Aug. 28.

“Telemedicine is spreading across the country in chronic disease and mental health care, but abortion’s the only way we’re seeing it restricted,” said Elizabeth Nash, state issues manager at the Guttmacher Institute. “Whenever there’s an advancement in health care, an abortion restriction is never far behind.”

The Guttmacher Institute and other supporters of abortion rights say it is safe and legal, and it expands abortion access in rural areas where no doctors offer them. Critics such as the anti-abortion group Operation Rescue counter that the system is plagued by a lack of oversight and can be dangerous for women if they suffer any side effects such as excessive bleeding, nausea or vomiting.

In the telemedicine abortion method, a patient is examined by a nurse at a clinic and then participates in a video conference for several minutes with a physician working in a different office. The doctor gives the drug using a computer that remotely opens a drawer in front of the woman, who takes the first dose while the doctor observes.

Two additional pills are taken at home, where her pregnancy is aborted. A follow-up visit is scheduled within two weeks. 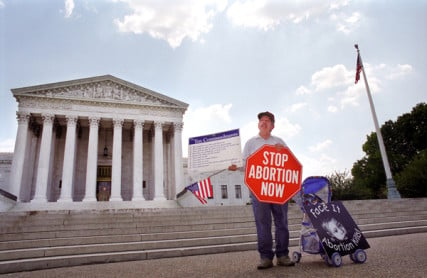 An anti-abortion protester holds a stop sign and the Ten Commandments on the sidewalk in front of the U.S. Supreme Court on May 14, 2001 in Washington, D.C.

“Pills are being distributed like Tic Tacs,” said Troy Newman, president of Operation Rescue. “Nobody would accept medical treatment like that for any other procedure.”

Between 2000 and 2011, 1.52 million U.S. women have used medication abortion, approved by the U.S. Food and Drug Administration in 2000, according to the FDA. In rare cases, these abortions have been linked to sometimes-fatal infections, but the FDA has not determined that the drug definitively caused those deaths.

In Iowa, the practice did not increase the state’s abortion rate and improved abortion access for women living in rural areas, according to a study released in November by the American Journal of Public Health. The findings also included a slight decline in the number of abortions being performed during the second trimester of pregnancy.

Jill June, president and CEO of Planned Parenthood of the Heartland, said outlawing telemedicine abortions would burden women by forcing them to seek doctors in unfamiliar areas.

“If she is not able to obtain the care she needs in her own community, then she has to leave her community, her support system and her hometown,” June said.

Women may have to undergo a surgical abortion if they cannot travel to a provider within the first nine weeks of their pregnancy, June said.

So far, no ban has targeted the wider use of telemedicine, which allows medical providers to remotely share images and videos using wireless or video technology.

The Georgia Composite Medical Board proposed a rule last year that would require an exam by a physician, either in person or electronically, before a patient could receive any telemedicine care. But the effort stalled amid concerns that it would limit access to medical treatment.

Jonathan Linkous, CEO of the American Telemedicine Association, said remote consultations are currently not threatened because state lawmakers have targeted only abortion procedures.