(RNS) Christian ethicist Jean Bethke Elshtain, a scholar who shaped national conversations on war and peace from her perch at the University of Chicago, died Sunday (Aug. 11) at age 72. 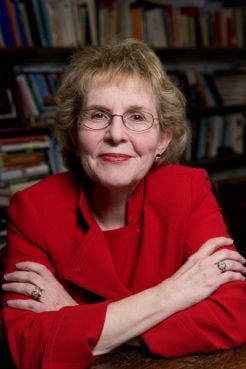 She had two heart attacks in 2012 and, according to the school, she had another “cardiac incident” earlier this summer that led to her death.

The widely admired political philosopher regularly wrote and lectured on ethics, politics and religion. She defended American military intervention in Iraq and Afghanistan using “just war theory,” a position that suggests there are times when it is necessary and perhaps right to go to war.

When a hundred scholars and ethicists signed a petition that read, “As Christian ethicists, we share a common moral presumption against a preemptive war on Iraq by the United States,” Elshtain argued the opposite, publishing the book “Just War Against Terror” in 2003.

“You won’t get a better person for combining philosophy and theological ethics with comment on the contemporary scene,” said Martin Marty, the dean of American church historians at the University of Chicago, a longtime friend and colleague of Elshtain, who differed with her on issues like the Iraq War.

“If you reduce her to the Iraq War, you’ll miss her.”

Elshtain was routinely criticized by other theologians for her position on Iraq, with Duke University’s Stanley Hauerwas and her University of Chicago colleague Paul Griffiths blasting her 2003 book as “nothing more than window-dressing for a passion to impose America upon the world” and “informed by jingoistic dreams of empire.”

To which she responded to her two friends, “When confronted by a review so tendentious and unfair, it is hard to know where to begin a response.”

Elshtain, who contracted polio as a child in Colorado, was raised Lutheran and was part of the Evangelical Lutheran Church in America, but converted to Catholicism later in life.

“Her many academic accomplishments were integrated into her personal concerns for family, for the public life of women in society, for good and just government, for religion’s contribution to the common good,” he said. “Her talent for friendship drew out the best in others, who began their acquaintance with respect that then progressed to love. She will be missed, but her presence will perdure.”

A mother of four and grandmother of four, Elshtain commuted between Tennessee and Chicago because of her husband’s work for the state of Tennessee in its disabilities office. She married at 18 and had three children but was divorced at 23. Her husband adopted her children and they had one more together. They also adopted one of their grandchildren whose mother has developmental disabilities.

She contributed to a range of publications, including The New Republic, First Things, The Weekly Standard, Commonweal and Books and Culture. It was difficult to pin her down ideologically and theologically, her peers said, as she touched on many issues, including feminism, bioethics and terrorism. 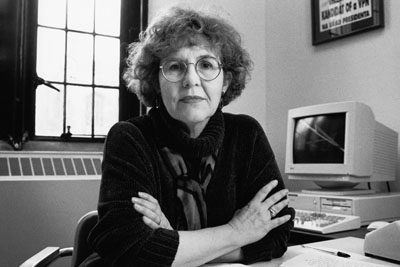 Jean Bethke Elshtain, a political philosopher at the University of Chicago Divinity School, isn’t surprised the Bush administration is arguing for U.S. action against Iraq in terms of national security and interests rather than just war principles. “If you get Cheney, Rumsfeld and Condi Rice in the room – those are not the terms they’re comfortable with,” said Elshtain. Photo courtesy University of Chicago

She held a long list of academic accomplishments, including being chosen to deliver the prestigious Gifford Lectures at the University of Edinburgh, joining previous lecturers like Karl Barth and Reinhold Neibuhr. She published more than 20 books, including “Augustine and the Limits of Politics” and “Public Man, Private Woman.”

“Depending on who you talk to, she was an ethicist, philosopher, legal thinker,” said Marie Griffith, director of the John C. Danforth Center on Religion & Politics. “She had so many hats and wrote about so many issues that related to a lot of us.”

Elshtain was a pioneer for women in the field, Griffith said, even though she wasn’t on a soapbox for women.

“I didn’t agree on some of the conclusions she came to, but I watched her empathize with a range of points of views,” Griffith said. “I learned a lot from the method she used and the care she took in her work.”

In her book “Women and War,” Elshtain explained that as a child she cut off her hair to imitate St. Joan of Arc.

“One day I would be a leader of men, too. Maybe a warrior. Maybe a martyr — though there didn’t seem to be much call for martyrs anymore,” she wrote. “I begged for my own gun.” She dedicated the book to the memory of John Lennon, writing that the Beatles’ music was so “life-affirming” and “the solemnity of the academy gets to me.”