(RNS) The mystery priest who appeared at the scene of a serious accident last week in eastern Missouri involving a teenager has been identified as the Rev. Patrick Dowling. 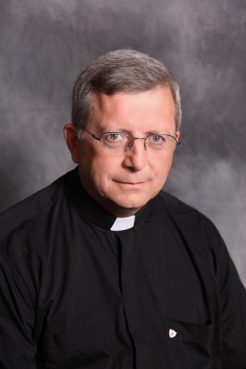 The mystery priest who appeared at the scene of a serious accident last week in eastern Missouri involving a teenager has been identified as the Rev. Patrick Dowling. Photo courtesy Jefferson City Diocese

The Diocese of Jefferson City, Mo., identified the clergyman after he stepped forward in the comments section of a story about the incident in the National Catholic Register.

Emergency responders had been working on extricating Katie Lentz, 19, from her damaged vehicle for at least 45 minutes when they saw her condition was drastically deteriorating. When Lentz asked if those around her would pray with her out loud, the priest stepped forward and said he would.

After emergency responders successfully removed Lentz from the wreckage and sent her off to the hospital via helicopter, they went to thank the priest and found he’d disappeared.

“I have 69 photographs that were taken from minutes after that accident happened — bystanders, the extrication, our final cleanup — and he’s not in them,” Raymond Reed, fire chief of New London, Mo., said after the accident. “All we want to do is thank him.”

Dowling wrote in the National Catholic Register that he was returning from Mass when he came upon the accident scene.

“I absolved and anointed Katie and, at her request, prayed that her leg would not be hurt,” the priest wrote. “I left when the helicopter was about to take off.”

The story stirred the imaginations of many across the country, including some who speculated he might have been a monk who died in 1927.

Dowling asked that his comments on the NCR story be removed, according to Editor-in-Chief Jeanette DeMelo, but he spoke of the experience with the Catholic News Agency.

“You must remember: There were many people praying there, many, many people … and they were all praying, obviously, for healing and for her safety,” he told CNA.

“I was probably part of the answer to their prayers: I came by, and anointed, and absolved,” he said.