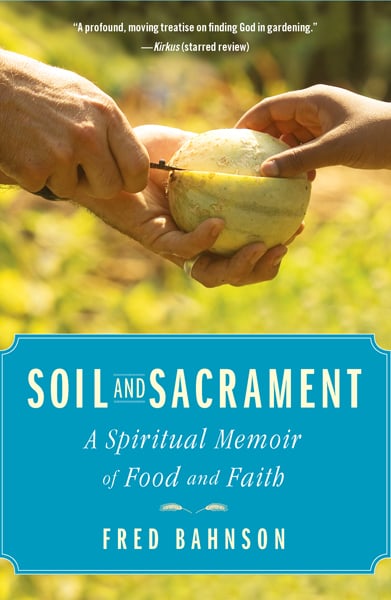 The book cover of "Soil and Sacrament" by Fred Bahnson.
August 13, 2013
Yonat Shimron

BREVARD, N.C. (RNS) Fred Bahnson’s first bit of advice when he started planning a church garden eight years ago came from an elderly tobacco farmer who grabbed a handful of soil, rolled it around in his fingers and shook his head:

“You don wohn fahm heah,” he said in his deep North Carolina drawl.

Those were not the only discouraging words he received as he planted and cultivated one of the earliest and most successful church gardens, 20 miles north of Chapel Hill.

But Bahnson, a Duke Divinity School graduate and a pioneer in the church gardening movement, had a different view of farming than the older tobacco farmer. He knew that if he gave back to the soil more than he took out -- in the form of compost, manure and other soil food -- he could create an abundant garden.

It was a different way of farming, born of a reverence for the Earth and a deep theological commitment to wholeness, community and peacemaking.

Bahnson’s new book, “Soil and Sacrament: A Spiritual Memoir of Food and Faith,” recounts some of the struggles at Anathoth Community Garden, and fleshes out portraits of four other faith communities -- places where growing food has produced what he calls “a physical manifestation of God’s presence.” 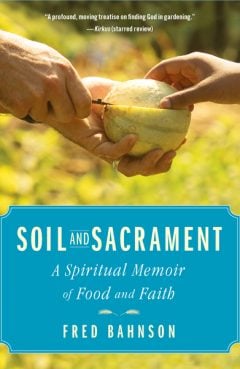 The book cover of "Soil and Sacrament" by Fred Bahnson.

Such communities are “not just about healthy eating,” said Bahnson, 39, who now lives in the mountains of western North Carolina. “It’s not about digging in the dirt. It’s about rethinking the way we live.”

In 2005 when Bahnson was appointed director of Anathoth, he knew of no other church ministry like it in the state. In less than a decade, the ministry has exploded. North Carolina's Forsyth County -- home to Wake Forest University’s School of Divinity, where Bahnson directs the Food, Faith and Religious Leadership Initiative  -- has an estimated 100 community gardens, more than half of them church-related.

“I can’t keep track of all the faith communities that are doing this,” said Norman Wirzba, professor of theology and ecology at Duke Divinity School. “It’s taken off in all kinds of ways.”

The movement’s leaders say gardens create opportunities for people to live out their faith in a more authentic way. Most gardens allow anyone willing to contribute time and labor to be a partner, regardless of whether they belong to a congregation. Digging in the dirt brings together people of different means and backgrounds and allows for connections, not only with the land, but also with each other.

And while some gardens donate the food they grow to pantries or soup kitchens, most seek out needy people to work alongside them.

Susan Sides, executive director of The Lord’s Acre, a community garden southeast of Asheville, N.C., that’s featured in Bahnson’s book, put it simply: “We do peacemaking and community building. The food is simply a vehicle.”

But while peacemaking is the goal of community gardens, it is not always the reality.

Fred Bahnson holds a peach and a blackberry picked from his orchard. RNS photo by Yonat Shimron

Bahnson said he did not want to romanticize the church garden movement, and his book depicts the struggles he encountered.

Some of the older members of Cedar Grove United Methodist Church, which hosted Anathoth, saw the garden as the work of outsiders and wanted nothing to do with it. Even after the garden began yielding bountiful crops and the ministry attracted private grants that allowed it to expand, a few wondered why the church couldn’t use the money to buy food for the poor instead of growing it.

“I was so consumed with the vision, I was working way too much,” he said. “The garden was all I thought about. I was not giving enough attention to my wife and kids or to my own need to rest.”

A two-year Kellogg Food and Community fellowship allowed him to visit other gardens and write about his experiences. In his book, he focuses on four, including a Trappist monastery in South Carolina that grows mushrooms; a Pentecostal farm and coffee-roasting operation in Washington state; and a Jewish organic farm in the Berkshires. He devotes a chapter to each, interspersed with his own personal spiritual quest.

Bahnson and his wife, Elizabeth, now live in this scenic town 30 miles south of Asheville, where they built a house and planted an orchard. Under a sloping forest canopy, they grow core crops, such as broccoli, kale, corn, beans and squash, as well as hardy kiwi, jostaberries, pawpaw, sea berries, blackberries, figs and peaches.

Fred Bahnson checks on the temperature of his compost pile. The ideal internal temperature of a compost pile should be between 120 and 140 degrees Fahrenheit. High temperatures are essential for destruction of pathogenic organisms and undesirable weed seeds. RNS photo by Yonat Shimron

“One reason I’m so interested in food, gardening and agriculture is that it’s a way we can be co-creators with God,” Bahnson said. “We’re not mere receptacles for God’s agency. We’re agents ourselves.”

The son of a doctor who spent three years on the mission field in Nigeria, Bahnson grew up in a traditional evangelical home. In divinity school he was introduced to Wendell Berry, the Kentucky farmer, writer and poet.

After graduating, he traveled to Chiapas, Mexico, where he attached himself to Christian Peacemaker Teams, an organization that trains volunteers for nonviolent activism in hotspots across the world.

It was there he fell in love with the agrarian lives of the Mayan coffee farmers and decided he wanted to spend his life farming and feeding.

“The Christianity I grew up with was about a personal relationship with Jesus,” he said. “Our care for the Earth never seemed to enter the conversation.”

Bahnson apprenticed on several farms and eventually found his calling at Anathoth, which was birthed out of an effort to heal the community’s wounds after the murder of a beloved owner of a bait and tackle shop.

From the start, the garden attracted more attention from the outside than from the church itself. Slowly, a steady stream of workers came to till, plant, weed, irrigate and harvest. Bahnson started weekly potlucks and installed an outdoor wood-fired oven. Then he and other gardeners started holding Communion services out among garden beds.

The site also became a mecca of sorts for other congregations and community leaders; each month, five to 10 people showed up to tour the garden and take notes. Soon a yearly conference at Anthoth drew 150 church leaders.

“It was clear God’s hand was in it from the beginning,” said Bahnson. “It was far bigger than any one of us.”

The garden was also able to live up to its calling as a force for peace. Bahnson and others regularly packed boxes of broccoli and kale and took them to people in need. He taught a group of disabled people in a local group home how to plant seedlings and arranged for them to work in the garden on a weekly basis. The garden also attracted a good share of the town’s newest neighbors, Hispanic immigrants.

Now, he believes, he has found a new calling, teaching faith leaders about the intersection of faith and food. And he’s doing it through stories.

“We need to see viable alternatives lived out before we change our behavior,” he said. “Stories enlarge our imagination. They open us up to the world.”