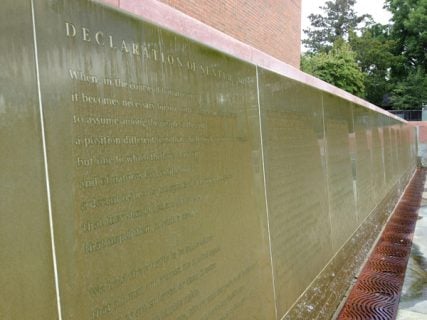 Elizabeth Cady’s Stanton’s “Declaration of Sentiments” are engraved in a granite waterfall at the National Women’s Rights Historical Park in Seneca Falls, N.Y. where it is part of The Freethought Trail. RNS photo by Kimberly Winston

SENECA FALLS, N.Y. (RNS) More than 29,000 people visit the Women’s Rights National Historical Park each year, where they sit on the wooden pews in the faded brick Wesleyan Chapel where, in 1848, 100 activists signed the first document in world history to declare “all men and women are created equal.”

But most visitors will hear little of the role that freethought — the philosophical view that challenges  both religious and secular  orthodoxies — played in extending women the right to vote in 1920.

What’s more, not many know that without freethought there would have been no push for women’s equality, abolition or reproductive rights.

Now, the Council for Secular Humanism, based in nearby Amherst, is seeking to highlight that history with “The Freethought Trail,” a self-guided tour through some of the most important historical sites dotting the rolling farmland and glacial lakes of West-Central New York.

Children play on a statue of abolitionists and freethinkers Susan B. Anthony and Frederick Douglass in Rochester, N.Y. RNS photo by Kimberly Winston

With a glossy, fold-out brochure and map, a detailed website and a smartphone mobile recording, the Freethought Trail looks to restore awareness of freethought’s influence on some of the most important figures and social movements of the 19th century.

“Some of the sites and the people they are associated with are widely visited, but the freethought aspect isn’t usually touched on,” said Tom Flynn, executive director of the Council for Secular Humanism and one of the main researchers of the Trail. “They don’t build it into their general presentations because I suppose some visitors would find it offensive. But it is part of the history, and not to share that is to short-change the visitors and the history itself.”

Drawn by the opening of the Erie Canal in the early 1800s, settlers transformed the region into a hotbed of radical social ideas. Religious ideas blossomed, too, including Mormonism, Spiritualism, several utopian movements and the development of the Protestant social gospel. By the late 1800s, the area was called “the burned over district” for all its religious and social fervor and reformers including Susan B. Anthony, Frederick Douglass, Elizabeth Cady Stanton and Amelia Bloomer made it their home.

Flynn came up with the idea for a trail a decade ago with historian Sally Roesch Wagner. 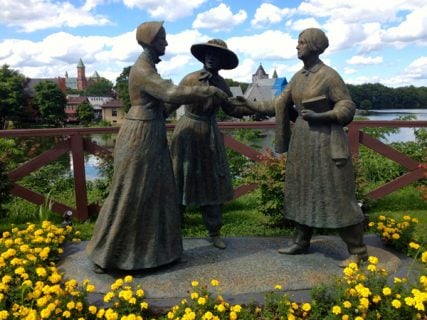 On The Freethought Trail – a statue by Ted Aub depicts the moment Amelia Bloomer, center, introduced Susan B. Anthony, left, to Elizabeth Cady Stanton and changed the course of the history of civil rights. RNS photo by Kimberly Winston

Why, they asked each other, did so many people remember Douglass and Anthony while many of their equally important contemporaries — Matilda Joslyn Gage, Robert Green Ingersoll and, to an extent, Stanton — were forgotten?

“The answer is they were freethinkers,” Wagner said from The Matilda Joslyn Gage Center, a stately Greek revival home in Fayetteville, on the eastern edge of the Freethought Trail, where she is director. “In a word, that is the reason.”

Wagner has spent 40 years studying what has come to be called “first wave feminism” of the 19th century. Her thinking goes like this: after the Seneca Falls convention, Stanton, Gage and Anthony became a triumvirate in the newly formed National Woman Suffrage Association. Stanton and Gage, both freethinkers who did not attend church, did the organizing and writing, while Anthony, a Quaker, became the movement’s public face. 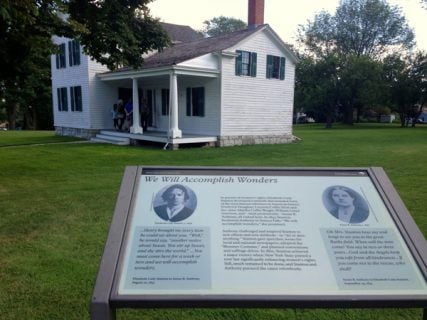 Both Stanton and Gage became increasingly critical of organized religion. Both wrote about their belief that Christianity kept women subordinate and urged women — and men — to reject it. They pointed to Scriptures that denied women a voice in church and contemporary ministers who preached women should remain at home.

Privately, Anthony – a member of the dissenting Hicksite sect of Quakers — agreed with her friends, but felt that focusing on anything other than the right to vote was a distraction. After the Civil War, her new allies in Christian women’s temperance groups demanded distance from Stanton and Gage’s unorthodox views. Gage left the movement in disgust, and Stanton was formally renounced and repudiated by the movement in 1896.

“I cannot even begin to imagine her feeling of betrayal,” Wagner said. “They were written out of the history” of the women’s movement.

At the 75th anniversary of the Seneca Falls convention, only Stanton’s daughter Harriot, herself a reformer, memorialized her mother with a plaque inside the Wesleyan Chapel. The Freethought Trail works to repair the rift. It includes multiple Gage sites, including her gravesite and her house, the site where her son-in-law, L. Frank Baum, first encountered freethought ideas he eventually incorporated into the “The Wizard of Oz.” 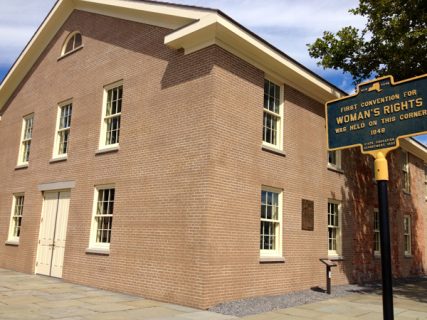 The Wesleyan Chapel in Seneca Falls, N.Y. where the first Women’s Rights Convention was organized by freethinkers in 1848. RNS photo by Kimberly Winston

Stanton gets the star treatment at her Seneca Falls home, where she cared for seven children; at the Wesleyan Chapel; and at a house in nearby Waterloo where she composed the convention’s “Declaration of Sentiments” that included the words “and women” to the Declaration of Independence’s promise of equality. Outside the chapel, water cascades down a granite wall engraved with Stanton’s sentiments, many reflecting freethought.

“[Mankind] allows her in Church as well as State, but a subordinate position,” one reads, “claiming Apostolic authority for her exclusion from the ministry, and, with some exceptions, from any public participation in the affairs of the Church.”

Other sites are more well-known, especially the Douglass and Anthony homes and graves, all in Rochester, and the Grandin Print Shop in Palmyra. That’s where Joseph Smith printed the first edition of The Book of Mormon –alongside publishers of a freethought newspaper. Its publisher, Obadiah Dogberry, got an early look at Smith’s work, drawn from golden tablets Smith claimed to have found in the nearby hills, and skewered it in his next edition. The Grandin Print Shop is now run by the Church of Jesus Christ of Latter-day Saints and the word “freethought” is not evident in its displays. Freethought Trail visitors must dial a number on their smartphones to hear its version of history.

“Dogberry found the future scripture ridiculous,” Flynn’s voice intones on the recording.  “It was the first lay criticism of the Book of Mormon, and many of its criticisms are upheld by contemporary scholars.”

The Susan B. Anthony House and Museum in Rochester, N.Y, a site on The Freethought Trail. RNS photo by Kimberly Winston

At Anthony’s house, where visitors can see “Aunt Susan’s” trademark black silk dress and alligator handbag, docent J.D. Lynne easily and eagerly responded to a visitor’s question about freethought in the women’s history.

“People who did not hold traditional religious beliefs, like Elizabeth Cady Stanton, may have influenced our history more than religious people,” he said in a second floor bedroom where Stanton was often a guest.

Some sites receive only a trickle of visitors. The Robert Green Ingersoll Birthplace Museum, in lakeside Dresden, is the first stop on the Freethought Trail. There, for a $2 fee, visitors can view the bedroom where the orator known as “the Great Agnostic” was born and have their picture taken with a giant bust of his head rescued from the rubble of a 19th century theater.

Other sites flesh out the history of anarchist Emma Goldman, abolitionist Lucy Colman, author Mark Twain and birth-control activist Margaret Sanger — all freethinkers, according to the Trail’s organizers. In total, 59 sites dot the Finger Lakes region, running from Rochester in the west to Peterboro in the east and from Palmyra in the north to Elmira in the south.

At the Robert Green Ingersoll Birthplace Museum in Dresden, N.Y., visitors can have their picture taken with this oversized bust of the man known as “The Great Agnostic.” RNS photo by Kimberly Winston

Currently, the Freethought Trail is the only one of its kind, Flynn said, but he knows of several other regions of the U.S. rich in both history and largely unknown freethought connections.

They include the Plains states, where freethinkers published newspapers and challenged “blue” laws;  the Texas panhandle where German freethinkers settled; and The Pacific Northwest, where the first atheist university was (briefly) founded.

“The upshot is that if you had some people who knew their local history and the movement’s history, I could foresee 20 or 30 freethought trails in different regions around the country,” he said. That would suit Erik Sandhal, 22, just fine.

Touring the Wesleyan Chapel with his family, Sandhal said he had taken a history course on American rhetoric that discussed Stanton, but not her religious beliefs.

“I would have liked to know about that,” he said. “It makes me think of these people as a more diverse group.” 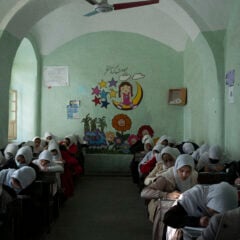 Religion Hub
Taliban hard-liners turning back the clock in Afghanistan