(RNS) The small sticker on professor Robert Schmidt’s office door isn’t just a decoration — it’s a beacon of safety for students who feel they are being singled out for their lack of religious beliefs. 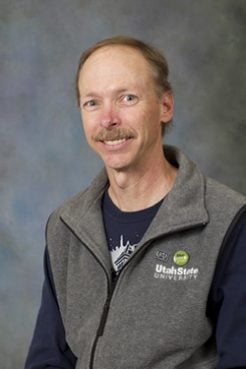 The blue, green, yellow and pink rectangle signals that Schmidt’s office at Utah State University is a “Secular Safe Zone” — a place where students who are atheists, agnostics or just questioning their faith can go for advice about dealing with bullying, discrimination and other forms of aggression.

“Being an ally to ‘create safe spaces in which secular students can question, criticize, and discuss topics and issues important to them’ feels right to me,” Schmidt said from his Logan office, quoting the goals of the Secular Safe Zone program. “All students should feel safe on campus.”

The Secular Safe Zone program kicked off this fall after two years of planning by the Secular Student Alliance, a national organization for nontheistic students. The program enlists “allies” like Schmidt among faculty, administrators, counselors and others on college and high school campuses who are trained in the needs of nonreligious — or “secular” — students.

So far, there are Secular Safe Zone allies at 26 college and high school campuses in 14 states, including California, Nevada, Ohio, Utah, Illinois, Florida and New York.

The program is patterned on similar safe zones for lesbian, gay, bisexual and transgender students now found on many college campuses.

Awareness that nonreligious students need a similar program was heightened by the high-profile case of Jessica Ahlquist, a Rhode Island student who faced death threats and public ridicule after asking that a prayer banner be removed from her public high school in 2010.

“We heard too many stories of bullying and harassment from our students and looked around for something to do,” said Jesse Galef, SSA’s communications director. “This seemed like the logical next step, and it seemed like there is a lot we can learn from what the LGBT community has done.”

The nonreligious and LGBT campus communities have much in common, Galef said. Members of both may be closeted and want to “come out.” Both may feel cut off from family and friends because of their identities. Both groups face stigma and discrimination within the broader culture.

Phil Zuckerman, a Pitzer College professor of sociology and secular studies, said providing nonreligious students with a safe place to express themselves is vital, especially on campuses where religion is strong and pervasive.

“Unfortunately, many Americans fallaciously think that being secular is the same thing as being immoral or un-American,” he said. “So there is a lot of negative stereotyping that often emerges, and this can sometimes create an uncomfortable environment for secular students.”

At Utah State, where Schmidt teaches, many students are members of the Church of Jesus Christ of Latter-day Saints.

“They have many shared experiences and traditions,” Schmidt said of the Mormon students. “I have heard from some students, certainly a minority, that they feel left out because they are not LDS, that they are subtly pressured to conform, and they are left feeling very uncomfortable talking about their own spiritual foundations.”

Schmidt noted that both religious and nonreligious students are “my students” and he feels protective of both. As an ally, he said, “I don’t preach, I don’t denigrate others, and I don’t promote one worldview over another.”

That is a core directive of the program, said Lori Fazzino, a graduate student instructor and secular ally at the University of Nevada, Las Vegas.

“We are not trying to turn students off of religion,” she said. “It is important to be neutral so they feel safe expressing all their views, not just the ones I or SSA would agree with. We have to be all inclusive to be really and truly safe.”

This is not the first time nonreligious groups have piggybacked on lessons learned in the gay community. In 2011, “We Are Atheism,” a video campaign aimed at letting closeted atheists know they are not alone was launched, inspired in part by the “It Gets Better” video campaign started in 2010 for closeted and bullied gay teens.

Nor is it the only refuge for those who question their faith. Earlier this year, Recovering from Religion, an international support group for former believers, launched a 24-hour hotline staffed by volunteers for religious doubters.

Galef said SSA started the program after polling its members across their 393 chapters on college and high school campuses nationwide about the impact of bullying.

No one has reported anyone using a Secular Safe Zone yet; the program is only a few weeks old. But Sarah Henry, a 17-year-old high school senior in Indiana, said her school would benefit from one. When she and other students formed a club for nonreligious students, they were bullied, threatened, shunned and their clubs fliers were torn down.

“It is incredibly hard for students to feel safe and comfortable about coming out to their friends about their lack of religious beliefs in a place where that is unusual,” she said. “The Secular Safe Zone allows them to have peers and authority who know what they’re going through and can help them even if they just need someone to talk to.”