WASHINGTON (RNS)  “All labor has dignity.” That’s what the Rev. Martin Luther King Jr. said 50 years ago, and it’s still as true today.

Yet too many working men and women are unable to live with dignity in a world where the fastest-growing jobs are the lowest-paying ones. Just and living wages are a moral imperative, and workers must earn enough to afford the basics for themselves and their families. That’s why we have come together to support those fighting for a living wage.

As it turns out, the largest low-wage job creator in the country isn’t Wal-Mart or McDonald’s — it’s Uncle Sam. Through federal contracts, loans and leases, the federal government employs about 2 million low-wage workers across the country — sewing military uniforms, cleaning the bathrooms at Washington’s Union Station, serving Big Macs at the Smithsonian’s National Air and Space Museum and hauling federal loads on trucks. Too many of these workers can’t even afford rent and food, they work without any benefits and often are forced to rely on economic safety net programs like food stamps, Medicaid, and Section 8 housing vouchers to meet their basic needs.

They’re workers like Wilfredo Reyes Lopez. Wilfredo earns $6.50 an hour — nearly $2 below the D.C. minimum wage — as a cook in the Ronald Reagan Building in downtown Washington. Recently widowed, Wilfredo barely makes enough to keep him and his three kids in their single-bedroom apartment.

Or Ana Julia Fuentes, who has worked as a janitor at Union Station for 23 years and makes $8.75 an hour. Or Ana Salvador, who has worked at the McDonald’s at the Air and Space Museum for 11 years and has to rely on food stamps and Medicaid to care for her four kids as a single mother.

Tourists enjoy their visits to iconic federal buildings and contractors reap record profits with massive executive compensation; all the while many of the workers making tourists’ experiences so memorable are suffering behind the scenes.

Our holy books teach, and we preach, that work should provide dignity and that all people are entitled to justice. Ecclesiastes asks: “What gain have the workers from their toil?” In the New Testament, Jesus asks that we see him when we encounter the “least of these who are my family.” The Quran says: “Give just measure and weight, nor withhold from the people the things they are due.” While there are differences between us, all religions believe in justice.

Instead of joining us in standing behind these workers, the federal government ignores its responsibility for their plight. It could set the standard for the just and equitable treatment of working people who want to share in God’s wondrous bounty. We’re asking President Obama to sign an executive order ensuring that workers employed under government contracts or government laws and leases earn a living wage.

President Obama can use his authority to ensure that government contracts set the living wage as a benchmark of fair and just employment across the country. “No one who works full-time should live in poverty,” the president has said, and he has promised to do everything in his power to help rebuild the middle class. He has a remarkable opportunity to make good on those statements. With the stroke of a pen, he can lift 2 million workers out of poverty. 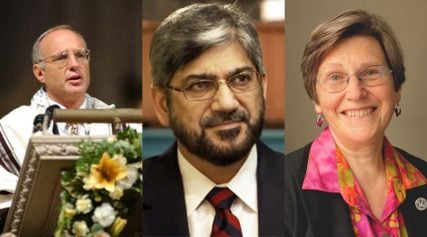 Our faith compels us to address these fundamental moral and human rights issues. When workers toiling under the purview of the federal government aren’t making enough to put food on the table and keep a roof over their heads, the president ought to do something to lift these workers out of poverty.

As poverty continues to increase unabated, the faith community must raise its voice and speak in unison. President Obama must bring justice to these workers. Morality demands it.

Signs of the Times
The US needs an ambassador to the Holy See
Follow us on Facebook!
Submit your photos to RNS