Speakers at the Oct. 9 “Faithful Filibuster” pray outside the U.S. Capitol for those affected by the government shutdown. RNS photo by Katherine Burgess

(RNS) Under a cloudy and drizzly sky, across the street from the U.S. Capitol, David Beckmann read passages from the prophet Isaiah.

“Comfort, comfort my people, says your God,” read Beckmann,  president of Bread for the World and one of several Protestant and Catholic leaders who gathered Wednesday (Oct. 9) to launch  “Faithful Filibuster.”

The effort is intended to remind members of Congress that the government shutdown is hurting poor and vulnerable people.

Volunteers planned to read more than 2,000 verses, possibly continuing into the night.

“In the midst of a crisis when we don’t really know what to do, we thought, ‘Let’s read the Bible and hear what God has to say,’” Beckmann said.

There were no protesters, and few showed up to support the group, which huddled in front of the Capitol later to pray. 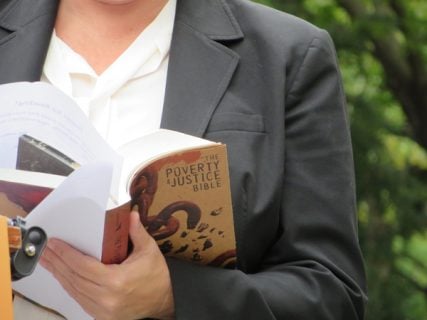 Kathy Saile, director of domestic social development for the United States Conference of Catholic Bishops, flips through the “Poverty & Justice Bible,” a Bible that speakers at the Oct. 9 “Faithful Filibuster” say they want to give to every member of Congress. In the “Poverty & Justice Bible” every verse pertaining to justice for the poor and needy is highlighted in orange. RNS photo by Katherine Burgess

The reading of Scripture will continue at the beginning of each day’s session of Congress, as long as Congress is in session. Religious leaders hope Congress will pass “a budget that cares for the poor and vulnerable.”

The Circle of Protection, a coalition of denominational and nonprofit leaders that supports programs that assist the poor, organized the event.

“We all are here because we agree that protecting the poor has to be one of our highest national priorities,” said Galen Carey, vice president of the National Association of Evangelicals.

News
War in Ukraine may leave millions hungry, warns Eugene Cho of Bread for the World
Follow us on Facebook!
Submit your photos to RNS