(RNS) President Obama may not attend church most Sundays, but a new book reveals the Bible verses and prayers that he reads every morning.

“The President’s Devotional,” released Tuesday (Oct. 22) by Pentecostal minister turned political aide Joshua DuBois, is a compilation of 365 of the more than 1,500 meditations DuBois has sent the president since he started working for him in the U.S. Senate.

DuBois, who left his White House post in February, spent his weekends reading and praying over what he would send to Obama’s Blackberry the next week. He drew from the words of the Hebrew Bible and the New Testament, the songs of Nina Simone and Bob Dylan, and the activism of Fannie Lou Hamer and the Rev. Martin Luther King Jr.

DuBois, 31, hopes the meditations “written for a Christian president” might appeal to people of diverse faiths.

“I think the ones that have been most useful to the president were those that focused on knowing God’s love for us, knowing how to love our neighbors and knowing how to start each day with peace and joy,” he said in an interview on Monday.

He continues to send devotional messages to Obama every morning, even though he is no longer director of Obama’s Office of Faith-Based and Neighborhood Partnerships.

In one of the dozen essays that introduce a month’s devotional readings, DuBois recalls how Obama took on a pastoral role as he talked with surviving family members of the 20 elementary schoolchildren killed in Newtown, Conn.

“There’s really no other way to describe his outreach other than ministry,” DuBois said of that day in December 2012. “In those dark times, I think he did his best to share the love of God with people who were just facing just a heart-wrenching tragedy.” 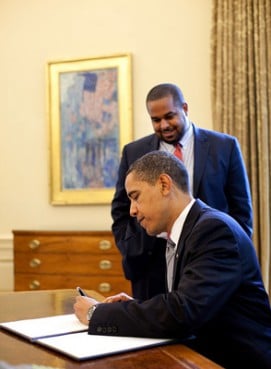 President Obama signs the proclamation marking the National Day of Prayer in the Oval Office in May 2009 while Joshua DuBois, director of the White House Office of Faith-based and Neighborhood Partnerships, looks on. Religion News Service photo courtesy of Pete Souza of the White House

DuBois was on the receiving end of Obama’s personal touch when he learned in 2005 that his own father — who had been involved in an insurance scam — had died in prison.

At the time DuBois was the person who wrote letters to the senator’s Illinois constituents — “the lowest staffer on the totem pole” — but he nevertheless got a call to visit Obama’s office.

“For him to take the time to call me into his office and wrap his arms around me and talk to me about his own dad and give me some words of encouragement in that very difficult moment really showed me President Obama’s character,” DuBois said.

Before DuBois got engaged in May 2012, the president occasionally reminded his then-special assistant that he shouldn’t drag his feet on marriage. Privately and publicly — even in front of the dozen faith leaders gathered in the Oval Office to launch the advisory council to DuBois’ faith-based office — he’d ask, “You engaged yet?” DuBois said it was less badgering and more emphasizing the importance of lasting relationships.

“It took me a while to absorb that point but I finally did,” said DuBois, who married the former Michelle Duff-Mitchell on Sept. 1.

DuBois, who now runs the Values Partnerships consulting firm, also revealed that he disagreed with Obama and others in the administration on the controversial contraception mandate in the Affordable Care Act. He wrote that he argued “the government just can’t force religious organizations to pay for things they don’t believe in.”

When the White House carved out an exemption for some religious groups, DuBois said it showed the administration heard and understood the criticism.

“I think the White House over time really got it right and struck the right balance between religious liberty and protecting the rights of women,” he said.

Here are three of the meditations in “The President’s Devotional”:

Be careful, however, that the exercise of your rights does not become a stumbling block to the weak.

We can do anything today — and we’d probably be right.

Our statements are likely backed by unassailable facts and solid figures. Our postures toward those who have wronged us are probably justified. The judgment we cast on others is likely warranted, given their misdeeds.

But is being right . . . worth it? Once we’ve summited the mountain of our own correctness, what great prize will we receive?

Paul, echoed by the poet Maya Angelou, reminds us of what is most important. Not our correctness nor the exercise of our multitude of rights. Rather, what is most important is the impression we leave behind on our brothers and sisters, the edification that is left in our wake, and the echoes of our love.

Dear God, let me put first things first — not my own “rightness” but my love for you and for others. Amen.

Do not merely listen to the word, and so deceive yourselves. Do what it says.

I would not so dishonour God as to lend my voice to perpetuate all the mad and foolish things which men have dared to say of Him. I believe that we may find in the Bible the highest and purest religion . . . most of all in the history of Him in whose name we all are called. His religion — not the Christian religion, but the religion of Christ — the poor man’s gospel; the message of forgiveness, of reconciliation, of love; and, oh, how gladly would I spend my life, in season and out of season, in preaching this!

We have to peel back the layers of religion to find Christ. When our churches, our pastors, our leaders point us toward Jesus, toward his word and his love, they deserve our full embrace.

But when we encounter religion and leave feeling less connected with Christ than when we began, we know something’s amiss. That’s when we must return to the basics: reading the Bible for ourselves, experiencing a prayerful communion with God, and engaging in gentle fellowship with other believers.

Jesus, be my religion. Help me find the support necessary to grow closer to you. Amen.

Yet the news about him spread all the more, so that crowds of people came to hear him and to be healed of their sicknesses. But Jesus often withdrew to lonely places and prayed.

We can’t give everyone all of us, all the time. Sometimes, like Jesus, we have to withdraw, and pray.

Leadership is not just physically straining; it taps our spirit too. When the water in the well has drawn low, we must be intentional about pressing pause in our public roles and finding quiet spaces in which we can be replenished. Jesus, after pouring himself out for the crowds, “often withdrew to lonely places and prayed.” If we’re going to continue at maximum capacity and impact, we should regularly do the same.

Dear God, let me know when to engage and when to disconnect. Help me find my own “lonely places,” where I can go and pray. Amen.