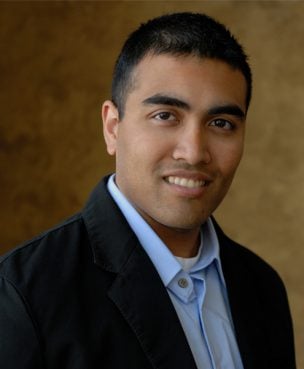 Hemant Mehta, author of the Friendly Atheist blog and two books on atheism, offered to raise money to cover the medical bills or other needs of the Rev. Norman Hayes, who was injured when the boyfriend of a parishioner allegedly attacked him. Photo courtesy Hemant Mehta

The “Pastor Norm Medical Fund” has raised more than $5,000 toward its $15,000 goal. Hayes’ son, Andy, thanked atheists for supporting his dad’s recovery:

(RNS) A prominent Chicago atheist is reaching out to an Ohio pastor who was brutally beaten by a self-proclaimed “militant atheist” after a church service on Oct. 20.

Hemant Mehta, author of the Friendly Atheist blog and two books on atheism, offered to raise money to cover the medical bills or other needs of the Rev. Norman Hayes, who was injured when the boyfriend of a parishioner allegedly attacked him.

The alleged attacker, James Maxie, 28, told local police he came to Bridge Community Church in North Hampton, Ohio, with his girlfriend to try to “regain my faith in God,” according to the Dayton Daily News. Maxie described himself as a “militant atheist” on his Facebook page.

When Hayes asked Maxie’s girlfriend if she felt “safe” with Maxie, he allegedly became enraged and began beating the pastor. Hayes suffered a broken nose, facial lacerations and bruises.

Mehta, a high school math teacher, read about the incident online and took it to his popular blog. “How should we react when a ‘militant atheist’ beats up a pastor?” he asked, and concluded an appropriate response would be to raise money for the victim.

“This guy went through something rough,” Mehta said when reached by phone. “I think it is a nice gesture to say we feel horrible for what you went through. This shouldn’t have happened. We disagree with Christians all the time but that is not how we resolve our debate.”

Mehta said he was also moved to respond when he discovered how deeply Maxie, who has a history of violence and is a convicted sex offender, aligned himself with the atheist community.

“I looked at his Facebook page,” Mehta said. “The things he liked and the things he had on his wall were friends of mine and he is a supporter of groups I like. So he is not just some random dude; he is someone who is a part of this movement in some way, and that is something to think about.”

Hayes’ church was unavailable for comment, and an email address for him on the church’s dormant Facebook page was out of date.

The incident has alarmed others in the atheist community, too. Dusty Smith, a popular atheist comedian, posted a YouTube video decrying the attack that quickly garnered more than 500 comments, many of them condemning Maxie.

So far, Mehta said, his calls to Hayes and his church have gone unanswered. It is not uncommon, he said, for religious people and groups to refuse the charity of atheists.

When a South Carolina church was vandalized with atheist-themed graffiti, Mehta raised about $3,000 from his readers to repair the damage. But the pastor declined the money, so Mehta gave it to a women’s shelter near the church instead.

And just this week, a South Carolina soup kitchen run by a Christian group declined the assistance of a local atheist group.