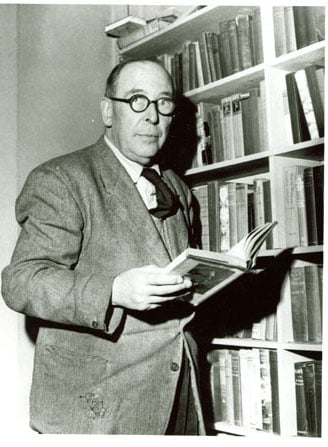 C.S. Lewis at bookshelf (circa 1960). Image used by permission of The Marion E. Wade Center, Wheaton College, Wheaton, Ill. *Note to subscribers: this image may not be used in any other publication (web or print) without additional permission.

CANTERBURY, England ( RNS) When he died on Nov. 22, 1963 hardly a soul blinked in Northern Ireland where he was born or in England where he spent most of his working life as one of the world’s greatest Christian apologists.

Clive Staples Lewis was a week short of 65 when he suffered a heart attack at his home in Oxford. The obituary writers barely noticed his demise, in part because he died on the same day that President John F. Kennedy was assassinated in Dallas.

British indifference to Lewis half a century ago will be examined at a one-day seminar at Wheaton College on Nov. 1, co-sponsored by the Marion E. Wade Center, the Institute for the Study of American Evangelicals and Wheaton College’s Faith and Learning program.

Lewis may be the most popular Christian writer in history, with millions of copies of his books sold, the vast majority in the United States where his influence is far greater than in his native country.

Was it Lewis’ modesty or British fear of discussing religion that fueled such indifference in Britain and Ireland?

A mixture of both, said Paul Johnson the prominent British journalist, author and former editor of the left-leaning “New Statesman” magazine.

Writing in the Catholic Herald, Johnson, a leading British Roman Catholic, said he first met Lewis when he was a student at Magdalen College, Oxford University, where Lewis was a don, specializing in Renaissance literature.

“When I knew him, just after the Second World War,” wrote Johnson, “he was famous for his work in English literature. … When we went for walks together, we discussed Chaucer and Dickens, Shakespeare and Dryden. ‘The Chronicles of Narnia’ were never mentioned. Indeed, I had no idea he wrote stories.”

Half a century later, his books sell between 1.5 million and 2 million copies a year.

C.S. Lewis was born in Belfast, on Nov. 29, 1898. His father, Albert James Lewis, was a lawyer; his mother, Florence Augusta Lewis, was the daughter of an Anglican vicar.

Shattered by her death, Lewis abandoned his inherited faith at the age of 15 and threw himself into a study of mythology and the occult.

In 1916, when he was just 17, Lewis was awarded a scholarship at University College, Oxford. World War I was raging, and the following year he joined the army.

He served in the Somme Valley in France with an English infantry division and experienced the horrors of mass slaughter.

He was wounded when a British shell falling short of its target killed two of his colleagues.

After the war, he returned to Oxford and in 1925 was elected a fellow and tutor in English literature at Magdalen College where he served until 1954.

His conversion to Christianity was slow and laborious. Reluctantly, he fell under the influence of Oxford colleague and friend J.R.R. Tolkien and G.K. Chesterton, who met every Tuesday morning at a local public house in Oxford and formed a debating club called ”Inklings.”

In his autobiography “Surprised by Joy,” he said that the night he turned from atheism to Christianity he became “the most dejected and reluctant convert in all England.”

Tolkien and Chesterton were disappointed that their new convert turned towards the Church of England, not Rome.

C.S. Lewis went on to write acclaimed books about Christianity — “The Screwtape Letters,” “The Chronicles of Narnia,” “The Space Trilogy,” “Mere Christianity,” “Miracles and The Problem of Pain” — the latter written after he watched his American Jewish wife, Joy Davidman Gresham, die of bone cancer in 1960.

The following year, Lewis experienced medical problems and on Nov. 22, 1963 he collapsed in his bedroom. He is buried in the churchyard of Holy Trinity Church, Headington, near Oxford — now a place of pilgrimage.

Celebrations of his life will be held throughout November in Belfast. On Nov. 22, he will be honored with a memorial in Poets’ Corner, Westminster Abbey, where the kings and queens of England are crowned and where some of the world’s greatest writers are buried.

His friend Johnson said Lewis, along with Tolkien, provide a counterbalance to the enormous flood of atheist literature, especially in children’s books.

“It is one of Lewis’ great merits that his tales can be read with equal pleasure by teenagers and grown-ups,” said Johnson. “He is thus, in a sense, the answer both to Richard Dawkins and Harry Potter.” Religion Hub
Westminster Abbey has witnessed nearly a millennium of British history – but many rituals, like those at royal funerals, aren’t so old