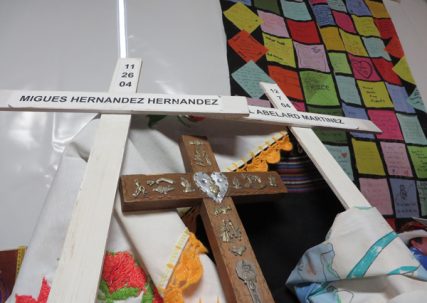 An altar is set up in honor of immigrants, including those who have died on their journey to the United States, in a tent outside the Capitol where men and women will fast and pray for immigration reform. RNS photo by Katherine Burgess

WASHINGTON (RNS) As an icy wind whipped the sides of a packed tent, five activists committed themselves Tuesday (Nov. 12) to fast from food and drink and to camp in front of the U.S. Capitol until Congress passes comprehensive immigration reform.

“I know that there are going to be difficult days ahead of me,” said Eliseo Medina from the Service Employees International Union. “I know that going without food will not be easy and I know that I will suffer physical hunger.

“But there is a deeper hunger within me, a hunger for an end to a system that creates such misery among those who come here to escape poverty and violence in search of the American dream.”

Religious and labor leaders joined immigration activists at the launch of the “Fast for Families: A Call for Immigration Reform and Citizenship.” Many will participate as “solidarity fasters,” fasting for a shorter time.

The Rev. Jim Wallis, president of the progressive Christian group Sojourners, said Christians must pray against the political dysfunction, self-interest and racial polarization that has blocked immigration reform.

Dae Joong Yoon, far right, executive director of the National Korean American Service & Education Consortium, speaks at the launch of the “Fast for Families: A call for immigration reform and citizenship” on Tuesday (Nov. 12). He and others will fast from food and drink until Congress passes comprehensive immigration reform. RNS photo by Katherine Burgess

One of the fasters, Dae Joong Yoon, executive director of the National Korean American Service & Education Consortium, said he knows firsthand the pain of family separation due to immigration law. When his family immigrated to the United States when he was 18, he was separated from his older brother for four years.

Now, preparing to camp ’round the clock at the foot of the Capitol, Yoon said he realized he will miss his own children during the fast.

“But I began to think about millions of families who are separated from their loved ones,” Yoon said. “This is a hard time, which requires our action.”