Peter Boghossian is a philosophy teacher and author of a wildly popular new book, “A Manual for Creating Atheists.” Photo courtesy of Peter Boghossian

(RNS) Got faith? Peter Boghossian says get rid of it.

Boghossian is a philosophy instructor and author of a wildly popular new book, “A Manual for Creating Atheists,”  that seeks to equip nonbelievers like him with the skills to convince believers to abandon their faith.

And while the book is sure to upset many religious people and even some atheists, it may signal a change in the way atheists engage believers. Unlike previous best-selling atheists Richard Dawkins, Sam Harris and Christopher Hitchens, Boghossian wants his readers to refrain from high-decible attacks against God and, instead, home in on faith.

“Faith is an unreliable reasoning process,” Boghossian, 47, said in an interview from Portland, Ore., where he teaches at Portland State University. “It will not take you to reality. So we need to help people value processes of reasoning that will lead them to the truth.”

He compares reasoning people out of it to administering treatment to drug addicts. “Faith,” he writes, “is a virus.”

To fight that virus, Boghossian’s book details techniques for creating “street epistemologists” — atheists trained to attempt to get believers to think more critically. He writes that he has used these techniques on friends, students, strangers and prison inmates. They include:

In what is perhaps the biggest difference between his methods and those of other, better-known atheist authors, Boghossian insists that his street epistemologists be, above all, kind, considerate, empathetic and respectful of people of faith.

“The ideal street epistemologist models the behavior she would like to see in others,” he said. “They should be gentle and open to ideas. They should be compassionate and seek no reward for disabusing people of specious ways of reasoning. Nobody owes you for helping them to reason better. You do it because you care about people and want to help them.”

“A Manual for Creating Atheists” is Boghossian’s first book. He is known within atheist circles for a 2012 lecture he gave entitled “Jesus, the Easter Bunny and Other Delusions: Just Say No!” that became popular on YouTube. In it, he says he does not assume believers are wrong, and advises his street epistemologists to do the same.

“If somebody knows something I don’t know, I want to know it” as long as it is based on evidence, he said. “So if there is enough evidence to warrant belief in the Quran or the works of L. Ron Hubbard or that Moses parted the Red Sea we ought to believe those things. There isn’t sufficient evidence and that’s why people invoke faith. You would not need to invoke faith if you have sufficient evidence.” 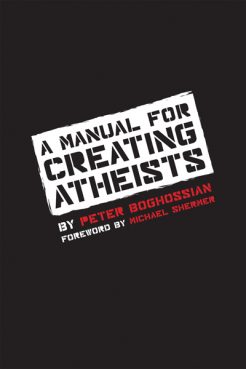 “A Manual for Creating Atheists” cover courtesy of Pitchstone Publishing.

And despite the title, Boghossian claims he is not proselytizing — a loaded word for atheists because of its association with religion — but “educating.”

“Proselytizing, by definition, means converting people and having them value being closed off to alternative beliefs and ways of thinking,” Boghossian said. “I’m advocating that we help people value belief revision and enable them to develop a mechanism that lets them differentiate reality from make-believeland. This is almost the opposite of proselytizing or converting people.”

“I think atheists would like there to be more nonbelievers,” said Volkan, also an atheist. “It is a title that invited opinion, discussion and debate, which we like to see as a publisher.”

Proselytizing or not, the book quickly struck a nerve. “A Manual for Creating Atheists” sold out its first printing before its Nov. 1 release date and ran through a second printing in just two weeks. It also broke into Amazon’s top 100 overall best-seller list — a milestone usually reserved for better-known atheist authors from much larger publishers.

“And we just had to order more,” Volkan said, noting that the book is on track to be the publisher’s all-time best-seller by the end of the month. “It is a happy problem to have.”

Not everyone is a fan, of course. Tom Gilson, the national field director of Ratio Christi, a student apologetics alliance, has followed Boghossian since first viewing his Easter Bunny lecture. He has read the book and criticized it on his blog, ThinkingChristian.net.

Gilson finds particular fault with Boghossian’s definition of faith as “belief without evidence” and “pretending to know things you don’t,” which he calls both “weak” and “erroneous.”

Even so, he believes Boghossian and his street epistemologists should be taken seriously.

“He is the best tactician the atheists have,” Gilson said. “He understands human psychology. He understands persuasion theory. He knows what it will take to confuse and maybe disabuse people of their faith if they don’t have a solid foundation of why they believe.”

Atheist readers seem to be taking it quite seriously. The book has been endorsed by Dawkins and other atheist heavy hitters including Michael Shermer, Victor Stenger and Sean Faircloth. One group of London atheists — 600 of them — has asked Boghossian to mentor them via Skype before they hit the streets in search of believers.

“Our aim is to better equip ourselves to have genuinely meaningful conversations with people of faith,” said J. Scott Swanson, a member of the London group. “Things get quickly heated when people feel under attack and conversations just grind to a halt. We want to help change that.”

Boghossian said he is surprised by the immediate success of the book and is hopeful he won’t have to do what he predicts in the book’s acknowledgments — sleep on friends’ couches to hide from angry readers.

“What I hope will happen is that instead of wanting to physically injure me, people will invite me to have a conversation,” he said.