More than three decades since their last stage performance together, nobody expected a Monty Python reunion. News broke this week that the septuagenarian comedy troupe will pick up dead parrots once more for a one-off show in London next July.

Many of the Pythons’ most famous sketches and films have explored religious themes with total and utter irreverence and absurdity. 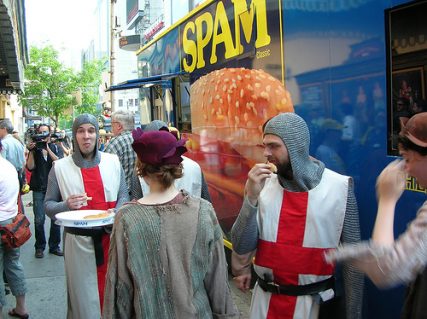 The knights who don’t say “Ni!” eat a whole lot of SPAM.

Holy Grail (1975) touched on witch burning, holy hand grenades, and depicted God as a curmudgeonly old man peering from behind the clouds.

The Meaning of Life (1983) portrayed Heaven as a glitzy stage with topless angels and featured a zany Roman Catholic man telling his youth gospel choir of a family that every sperm is sacred.

But Life of Brian (1979) was far and away the most controversial, drawing calls of blasphemy for depicting a Christ-like figure in some pretty compromising situations. By Christ-like, I mean born-on-the-same-day-next-door-to-Jesus Christ-like. You can understand why some viewers, especially those like the Bishop of Southwark who showed up 15 minutes late to a screening, mistook the protagonist for the Messiah.

Director and Python Terry Jones said Life of Brian is heretical but not blasphemous because it touches on dogma rather than belief. This distinction didn’t stop Life of Brian from being banned in Ireland, Norway and parts of the U.K. and condemned by the Roman Catholic Church.

After Life of Brian’s U.K. release, co-writers and stars of the film Michael Palin and John Cleese debated the Bishop of Southwark and Christian commentator Malcolm Muggeridge on the film’s merits and subject matter.

“You think that we’re ridiculing Jesus, and we say sincerely and truthfully that that is certainly not what we intended to do, and I believe that we’re not. … [Brian] says, ‘make up your own mind, don’t let other people tell you.’ … What we’re saying is take a critical view, find out about [religion], don’t just believe because somebody tells you to.”

This debate (watch it!) and controversy surrounding the film were explored in a super meta and rather funny BBC film called Holy Flying Circus (2011), which is also worth watching after you’ve seen the Life of Brian (available on Netflix).

The BBC’s head of religion and ethics recently said that modern audiences probably wouldn’t get the jokes in Life of Brian because Brits are basically illiterate when it comes to religion. Unfortunately, many of today’s youth are becoming Python illiterate. Click on the smattering of links above to tap into your parents’ (and grandparents’) sense of humor, youngins.