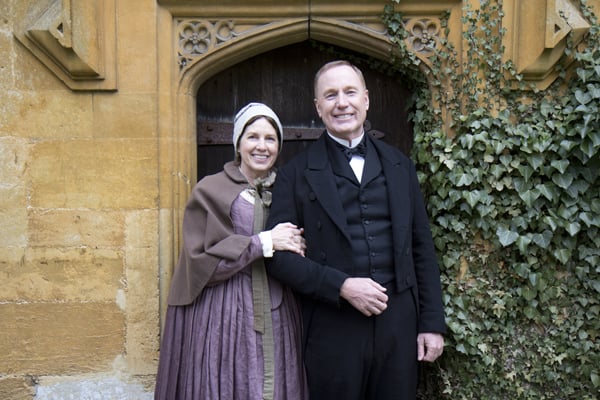 The author of "The Christmas Candle," the book on which the film was based, Max Lucado, had a cameo in the film, while his wife Denalyn was an extra. Photo courtesy of EchoLight Studios
November 22, 2013
Sarah Pulliam Bailey

The author of "The Christmas Candle," the book on which the film was based, Max Lucado, had a cameo in the film, while his wife Denalyn was an extra. Photo courtesy of EchoLight Studios

“The Christmas Candle” features a minister who struggles with his own faith and belief in miracles as he ministers to the English village of Gladbury. The film is a first for Santorum, who is now CEO of distributor EchoLight Studios.

“The greatest thing I have going for me is that people always have low expectations,” Santorum said after a film screening.

Religion News Service spoke with Lucado, whose book inspired the movie and who has a cameo in the film, on the film’s tensions and why December can be so difficult for so many. Some answers have been edited for length and clarity.

Q: What do you hope to accomplish with this film?

Q: The film seems to display a tension between faith and works. What is the role of miracles in that tension?

A: As a minister, I struggle with, “Is it all right to pray for a miracle? Why does God heal or why doesn’t he?” I don’t think it’s too tidy. As the minister struggles, it’s a bit autobiographical. There have been seasons in my life where I’ve wrestled with what’s my part and what’s God part.

My thinking is that miracles exist to reveal God, but miracles don’t exist for God to do me any favors. There are occasions where God intervenes in the natural flow of events to display his power, as much as to do something kind for me. That helps me on the occasion when he doesn’t answer the way I want him to. My faith helps me say, “God is using my struggle. My struggle is the answer to the prayer.” There’s a mixture of faith as trusting God to do what is right, not in expecting him to do what I want.

Q: There’s a lot to compete with around the Christmas season. How do you break through the noise?

A: At Christmas, there’s not a lot of stuff about Christmas -- I mean the biblical story of Christmas. I think there’s an opportunity for retelling the birth narrative in creative ways that people long for and appreciate. Every person, at some point during Christmas, asks, “Now why do we do this? Santa Claus and shopping are fun, but isn’t there something more to this?” Those of us who know the birth narrative, we want a reminder too. I think there’s always a place to come back to the Bethlehem story. 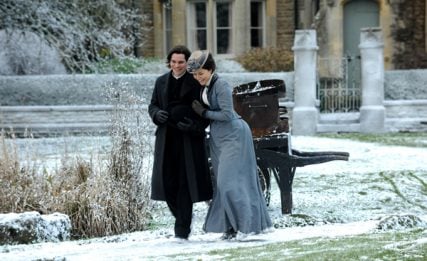 Hans Matheson as the Rev. David Richmond and Samantha Barks as Emily Barstow in "The Christmas Candle." Photo courtesy of EchoLight Studios

Q: It seems like there’s a lot of potential for outrage with the Christmas wars. Is that productive?

A: I don’t know if there’s any need to get antagonistic about it. Every faith has its story; every faith has its roots. The Muslim faith, the Hindu faith, the Christian faith -- we all have our stories. Part of the joy of sharing this planet together is that we all share our stories. I don’t think there’s any threat to hearing one another’s stories. I think the danger comes when we tell people “quit telling your story.”

Q: Is it challenging to be a pastor in December?

A: Christmas is happy for many people, but there are a large number of people who are finding it real difficult because it reminds them of what they don’t have. The way to respond to that, I think, is to acknowledge how difficult it can be and to bring a word of comfort, but then also to remind them of what they do have. The Christmas message says what you have is a Redeemer, a Savior, a God who came, who cares, and who’s coming again.

Q: You have said that your wife dealt with depression, and struggled to deal with it in a public way as a pastor’s wife. You said, “In tough times, it’s important for us to be a barnacle on the boat of God’s church.” Are you suggesting people just hang on and run with it?

Q: The pastor character in the movie seems to struggle during the Christmas season.

A: There’s a very poignant scene in which the reverend, who’s struggling with faith, has refused to pray for sick people, because he doesn’t believe anything happens. Then finally he does, and he comes in with his Bible in which he’s written Scriptures and placed them on the pages, apparently because he can’t find them, and he reads these Scriptures. It’s really a tender moment for him and the person for whom he’s praying.