WARSAW, Poland (RNS) The latest United Nations climate summit got off to an unusually emotional start when Yeb Sano, the head delegate from the Philippines, issued a tearful plea at the opening plenary.

With his country ravaged by Typhoon Haiyan — the kind of extreme weather that experts say is becoming more common due to climate change — Sano choked back tears as he announced he would fast in solidarity for his countrymen left without food.

Sano said on Nov. 11 he would refrain from eating during the conference unless important progress was made. Sano’s gesture has so far failed to trigger much of a change in the entrenched negotiations, and with talks expected to stretch into the weekend, he is still on his hunger strike.

Even so, Sano’s act helped galvanize support from religious leaders: former Archbishop of Canterbury Rowan Williams; Olaf Fykse Tveit, general secretary of the World Council of Churches; Munib A. Younan, president of the Lutheran World Federation; and numerous interfaith groups have all joined the fast and called on their supporters to join as well.

“It’s an illustration how much interest there is in this process from faith-based groups,” said Mohamed Adow, a veteran climate change activist with the British-based group Christian Aid.

Adow has been following the climate change process for six years, but most of the religious groups involved in the process are new. The United Nations does not break down participation from nongovernmental groups by the type of organization, but observers say participation by faith-based groups has mushroomed in the last two years.

The Warsaw talks — the 19th U.N. climate change summit — includes wider participation from religious groups than any of its predecessors meetings, observers say. Part of the reason is because the scope of the climate change debate has widened dramatically in recent years, now touching on issues of poverty alleviation, development, forced emigration, as well as stewardship of the planet.

“There are two main theological angles in this climate debate: the theology of creation and the theology of justice,” said Martin Kopp, a theologian with the Union of Protestant Churches of Alsace and Lorraine, in France. 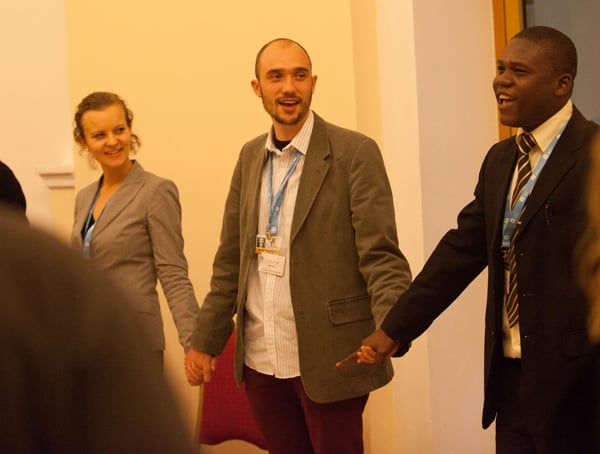 “The theology of creation talks about the role between man and earth. … Genesis says ‘replenish the earth, and subdue it,’ and this has profoundly impacted the human mindset about the way we relate to the world,” Kopp said. “The theology of justice is about the concern for the poor and vulnerable, which appears many times in Scripture.

“Both of these theologies,” he argued, “are relevant in this process.”

Several representatives of faith-based groups met in Warsaw with Christiana Figueres, the U.N.’s top climate change official, and she said she welcomed their increased participation. Individual negotiators have also said they take the views of faith-based groups into account when weighing their options. The ultimate impact of all that activism on the negotiations is harder to measure.

But that does not curb the enthusiasm of some members of the new movement.

“I think we can be a tipping point in this process,” said Raquel Kleber, from the Evangelical Church of the Lutheran Confession in Brazil. “It’s estimated that 80 percent of the people in the world believe in God. We can be a powerful force.”

Aaron Cohen, a Jewish climate and agriculture activist from New York, agreed: “This level of participation we see here, it is just the start,” he said.

Christian Aid’s Adow said the case must be made that confronting the risks from climate change has numerous ripple effects.

“Addressing this one problem can have an impact on many areas everyone must agree on,” he said. “We can help eradicate poverty, provide people with clean drinking water, better health, education, sanitation, plus, of course, avoiding the risks from the worst impacts of climate change. These are issues every religious person can agree deserve our best efforts.”

Kopp, who fasted for three days twice during the Warsaw talks, said acts like Sano’s can help unite disparate groups.

“All our belief systems differ in some ways,” he said. “But things like this show us what we have in common. The support we’ve received is astonishing. I’ve personally received hundreds of emails of support, and sometimes I can’t sleep at night because I’m so excited about the role we’re playing here. Of all the roles faith can play in this process, maybe the most important is to show that there is still hope.”