SAN FRANCISCO (RNS) Perhaps the Elephant & Castle pub here was a fitting locale for a visiting Brit to meet some mates.

But other stereotypes were left at the bar as about 100 people trod down a flight of stairs — pints of beer and wine glasses in hand — and into the pub’s basement to attend Sunday Assembly, a gathering of nonbelievers that both supporters and detractors have dubbed “atheist church.” 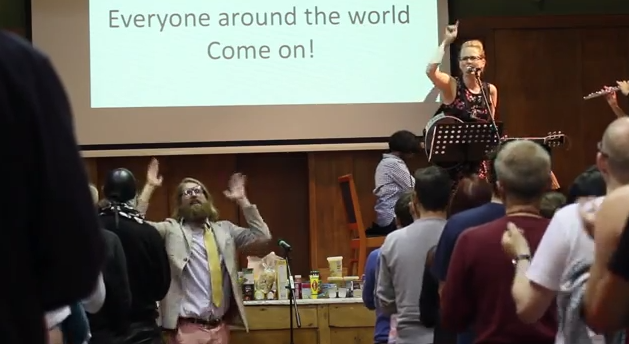 “Hellllllooooooooo San Francisco,” trilled Sanderson Jones, the blond, bearded British comedian everyone had come to meet on a recent Tuesday night. “If there is any city in the whole of the U.S. that should have a Sunday Assembly, it is San Francisco!”

Jones and his fellow British comedian Pippa Evans founded Sunday Assembly in London in January. Initial gatherings were standing room only, and branches were soon established in other British cities. Its use of group singing, lectures, and a goal to establish a sense of community have drawn many comparisons to traditional church.

But in San Francisco, a city long known for embracing nontraditional beliefs and lifestyles, Jones told the crowd the comparisons stop there.

“We get called the ‘atheist church,’ but we are really all the best bits of church but with no religion,” he said, darting his lanky form up and down the aisle, arms flapping like some excitable exotic bird. “Our vision is to help people live the best life possible.”

After some raucous applause, Jones hit the button on a borrowed sound system and kicked off the opening song — Jon Bon Jovi’s “Livin’ on a Prayer.” As the lyrics were projected on a screen, the crowd — largely, but not entirely, white and male — sang along, jumping and dancing and waving their hands in the air.

Part karaoke, part aerobics class, part comedy show, Sunday Assembly recently wrapped up a nine-city American leg of a fundraising tour but also left a long tail of backlash, as thousands of nonbelievers took to social media and the Internet to express their disdain:

And, like the many churches that detractors say Sunday Assembly tries to mimic, there’s already been a schism of sorts. New York’s Sunday Assembly split off on its own after becoming frustrated with Jones’ and Evans’ insistence that they not use the word “atheist” to describe themselves, an organizer there said. 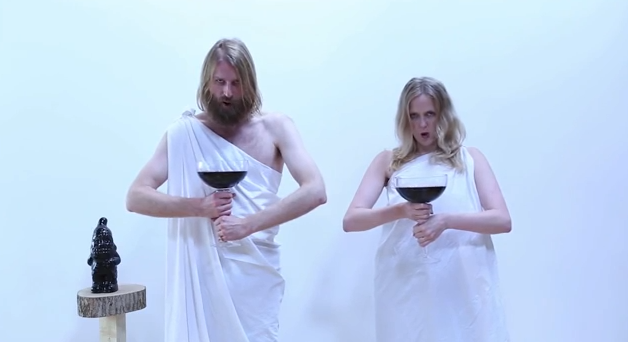 Sunday Assembly founders Sanderson Jones and Pippa Evans, in a promotional video, mocking themselves as a cult that’s not really a cult.

Jones is not surprised that the proverbial twit hit the fan. He even addressed it before the San Francisco crowd.

“If you start something that says ‘atheist church’ you should not be surprised to get a whole lot of abuse,” he said, “Twitter exists for all people who know you to tell you everything you are doing wrong.”

Polling data indicate Sunday Assembly may be on to something, however. While only 6 percent of Americans describe themselves as atheist or agnostic, one in five Americans are religiously unaffiliated, according to a 2012 survey by the Pew Research Center’s Religion & Public Life project. The same poll found that more than one-third of the religiously unaffiliated describe themselves as “spiritual” but not “religious.”

Still, there is a strong strain of dislike in the atheist community for anything that smacks of religion or its trappings. Daniel McCoy, a local nonbeliever who spoke here and at a San Jose gathering about the power of story, said many nonbelievers are hostile to religion because of rejection by religious family and friends or abuse by a person with religious authority.

But nonbelievers who have no beef with church — and maybe even fond memories of it — can still do something churchy without betraying their nonbelief, he said.

“Church has been around for a long time and started with religion, but religion is not necessary to doing it,” he said.

Jones has been adamant that Sunday Assembly is not about bashing religion — something many high-octane atheists believe is necessary to their goals. “We can go through an entire Sunday Assembly meeting without mentioning atheism, without mentioning religion,” he said after the meeting, his voice raw from all the shouting. “We have enough values that define us without having to do that.” 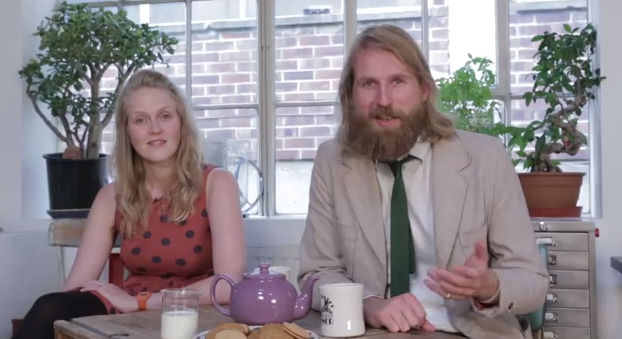 Sunday Assembly co-founders Pippa Evans and Sanderson Jones want to reach the world’s 300 million nonbelievers with their twice-monthly meetings focused on doing good and having fun.

Those values are in the group’s motto, he said: “Live better. Help often. Wonder more.”

Jenea Hayes, who traveled 26 miles through rush-hour traffic to attend with her 14-year-old daughter, Claire, said she was “disappointed” in the negative reaction to Sunday Assembly.

“I think a big part of it is in the United States there is a pushback against any person being open about their atheism,” she said. And those who are open about it, often try to distinguish themselves from the mainstream, which is religious.

“It is misguided,” she said of the criticism. “This is human stuff, not God stuff.”