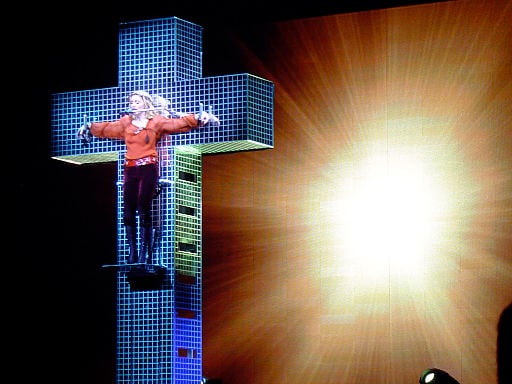 Madonna in her Confessions Tour, hanging from a mirrored cross in 2006.
December 2, 2013
Trevor Grundy 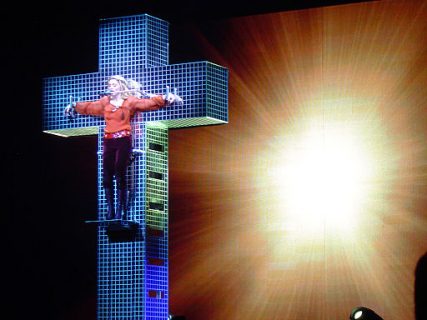 Madonna in her Confessions Tour, hanging from a mirrored cross in 2006.

CANTERBURY, England (RNS) The Christian cross has become little more than a piece of jewelry worn around the necks of celebrities, said Archbishop of Canterbury Justin Welby.

In the foreword to a new book about Christianity, the head of the world’s 85 million Anglicans presents the symbol of Roman torture upon which Jesus died as "the moment of deepest encounter with radical change."

And he regrets that after 2000 years, the cross has become trivialized.

"For those early Christians it was a badge of shame,” Welby said. “Today, it is more commonly seen as a symbol of beauty to hang around your neck. As a friend of mine used to say, you might as well hang a tiny golden gallows or an electric chair around your neck."

Although Welby made no reference to specific celebrities, several British papers set his comments alongside pictures of Madonna and other stars who wear crosses and who decorate stage costumes with glitzy religious symbols. High-end Italian designers such as Dolce & Gabbana, and Versace have used the cross on dresses and ornaments.

Welby’s comments were published in a foreword to the book "Looking through the Cross," written by Graham Tomlin, dean of St. Mellitus College in London, a meditation on Lent. In that essay, Welby asks: ”Are we now living with a symbol emptied of power by time and fashion? Christianity with a powerless cross is Christianity without a throne for Christ or an aspiration for Christians."

September 21, 2020
Related Posts
By Alejandra Molina
In Oregon, churches and anti-fascists unite to provide mutual aid to fire evacuees and others in need
By Erin Smith
My surprising journey to hijab fashion
By Alejandra Molina
Four young people of different faiths move into a home together, then a pandemic happens
By Jeffrey Salkin
Warning: Your piety might be dangerous to your health
By Amy Butler
How to celebrate Christmas: Change the world