ROME (RNS) Pope Francis was named Time magazine’s Person of the Year on Wednesday (Dec. 11), adding yet another high-profile accolade to what has been an unprecedented nine-month reign for the shepherd of the world’s 1.2 billion Catholics. 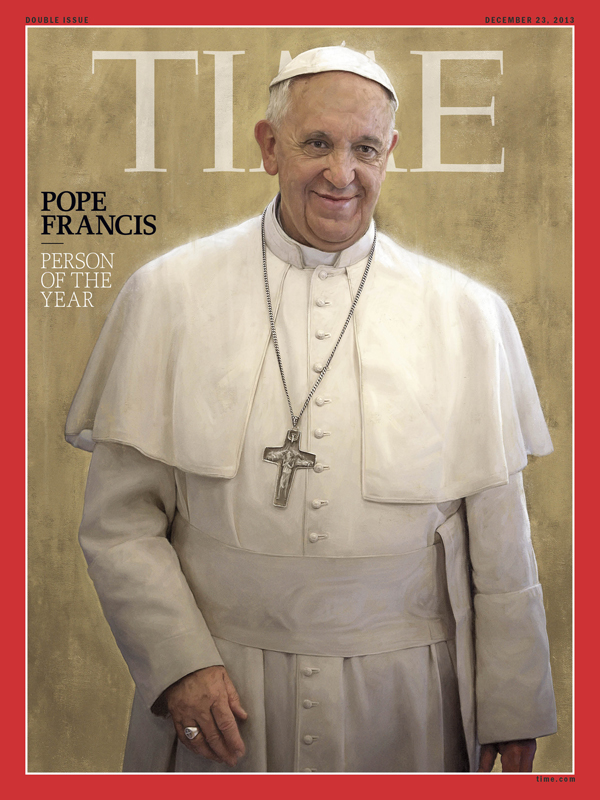 Time called Francis “The People’s Pope” and said it honored him for “pulling the papacy out of the palace and into the streets, for committing the world’s largest church to confronting its deepest needs, and for balancing judgment with mercy.”

Francis has been celebrated worldwide since becoming pope in March. Even before the Time honor, he was the top trending topic on Facebook. He is credited with increasing church attendance across Italy, making “Francesco” Italy’s most popular baby name for boys and helping to recast the tarnished image of the church.

A new poll released Wednesday showed the pope is more popular than ever: The St. Leo University Polling Institute released the results of a survey that showed more than three in five Americans approve of the pope — a number that jumps to 82 percent among U.S. Catholics.

“This fact (of the Time honor) is unsurprising, considering the resonance and very widespread attention given to the election of Pope Francis and the beginning of his pontificate,” said the Rev. Federico Lombardi, the Vatican’s chief spokesman.

“For his part, (Francis) does not seek fame and success, since he carries out his service for the proclamation of the gospel and the love of God for all. If this attracts men and women and gives them hope, the pope is content. If this nomination as Person of the Year means that many have understood this message, at least implicitly, he will certainly be glad.”

But not everyone was pleased with the choice. Barbara Blaine, president of the Chicago-based Survivors Network of those Abused by Priests, complained that Francis has done too little to address victims of clergy sexual abuse within the church.

“The pope has made many feel hopeful with his personal humility, down-to-earth gestures, and obvious deep compassion for the poor,” Blaine said in a statement. “But he has not made a single child safer. He hasn’t exposed one predator priest or disciplined one corrupt bishop.”

Francis is the third pope to be honored by Time since the magazine began selecting Person of the Year in 1927, following Pope John XXIII in 1962 and Pope John Paul II in 1994.