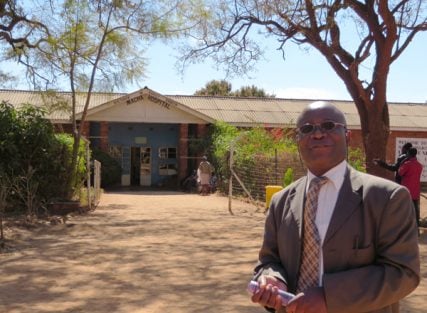 Mubiana said the reason was simple: At the Macha hospital, patients receive better care. “There’s negligence in government hospitals,” Mubiana said as two kittens scurried about and doctors made their rounds at the church-run hospital to check on patients like his uncle, Davis Mwaiya. “I had lost hope, but here he is on the road to recovery.”

In this remote part of Zambia where it takes more than a day’s walk to get to any nearby town, malaria has gone from a death sentence to near elimination. A partnership between the Zambian government and churches has created unique but effective collaboration in the fight to wipe out malaria.

Now, across Africa, the success in Macha has public health professionals and government employees asking whether the public-private model can be duplicated in other places. Macha Mission, a government-funded hospital, was started by the Brethren in Christ Church denomination and continues to have a faith-based appeal. RNS photo by Sarah Pulliam Bailey

For more than a decade, Zambia has been a constitutional Christian nation, paving the way for interesting partnerships like one at Macha Mission in the southern region of the country. In a country where a third of the hospitals are mission-run but government-funded, church and state are intrinsically intertwined.

“In the U.S. it wouldn’t work because of the separation of church and state,” said Dr. Philip Thuma, whose father, a Brethren in Christ Church missionary, founded the hospital in 1957. “Here, it’s just fine.”

Thuma also established a research arm as a U.S.-based nonprofit in 1997, publishing peer-reviewed articles and bringing researchers from places like Johns Hopkins Bloomberg School of Public Health to do more than 20 publicly and privately funded studies on malaria. 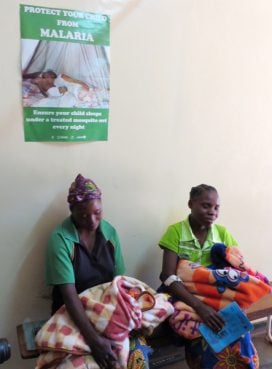 Mothers in Macha are encouraged to use preventative measures to protect their children from malaria. RNS photo by Sarah Pulliam Bailey

In the early days of his work, Thuma would go out every Friday on his motorcycle to surrounding villages to explain the value of immunizations, clean water and sanitation. The hospital has seen success in reducing malaria by 98 percent.

The hospital's executive director, Abraham Mhango, said that when he arrived in 1986 as a technician, he immersed himself in the community by attending church and playing soccer.

“We made a conscious decision to go out into the community, and that’s paid dividends,” Thuma said. “We’re not 100 percent sure why malaria is down, but I think that’s where the community buy-in comes in.”

Earlier this year, U.S. researchers announced a breakthrough in a malaria vaccine, but it could take at least three years to get the vaccine approved and distributed.

The footprint of faith-based organizations in African health care is undeniable, said Yoram Siame of the Churches Health Association of Zambia. About 40 percent of institutions in sub-Saharan Africa are run by faith-based institutions.

"People want the church to do so many things," Siame said, noting how people want churches to take up issues like abortion rights. "The church is not an anti-HIV/AIDS organization. It’s an anti-hell organization."

Doctors in Macha face a number of challenges, including the perception that those with HIV/AIDS can and should stop taking medication. Thuma said that American televangelist Benny Hinn has had a significant influence in Zambia because of his emphasis on faith healing. 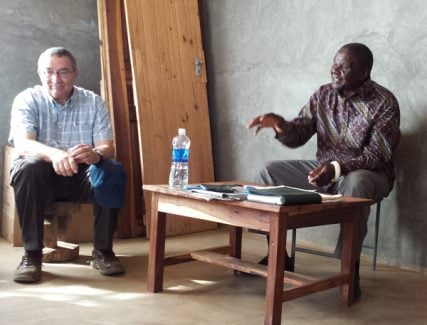 “Some people interpret Christianity by meaning you have to trust God,” Thuma said. “That style of healing service is interpreted to mean you no longer need drugs.”

Additionally, funding presents its own challenges. Since the mission hospital receives some donations from Christians in the United States, the Zambian government sometimes questions its own funding for the hospital.

Mhango said that the hospital struggles with retaining employees -- especially younger staff -- in a rural region with little to no night life for miles around.

"It does not have some other nice social things that young people today would like to have like their counterparts in urban cities and towns," Mhango said.

There's also the problem of demand, Mhango said, noting that the hospital often receives an influx of patients from outside the perimeters that they usually serve. "Demand is often greater than we can supply."

When HIV/AIDS first ravaged the region, the hospital was offered large sums of money from U.S. Christians to start orphanages for those whose parents died from the epidemic. Hospital leaders declined, citing the local culture’s system of extended family caring for the children.

The deference to culture reflects a larger attitude by missionary doctors of how faith motivates their medicine.

“For some Christians, medicine would be a way to convert people,” said Dr. John Spurrier, a missionary and physician at the hospital. “Sure, we’re interested that people come to faith, but it’s more than that. God’s redemption is to redeem bodies as well as souls.”

(Sarah Pulliam Bailey reported on HIV/AIDS, tuberculosis, and malaria in Zambia with the International Reporting Project.)

September 3, 2020
Related Posts
By Kalpana Jain
My spiritual path through the COVID-19 darkness
By Kathryn Post
Michael Hickson, man with disability, dies after Texas hospital ends COVID treatment
By Clément Girardot
In Togo, a Catholic nun fights COVID-19 for the sake of her AIDS patients
By Charles C. Camosy
Yes, we rationed care at the height of the pandemic and the elderly paid the price
By Selin Thomas
At Manhattan mosque, an imam eases a pandemic’s grief