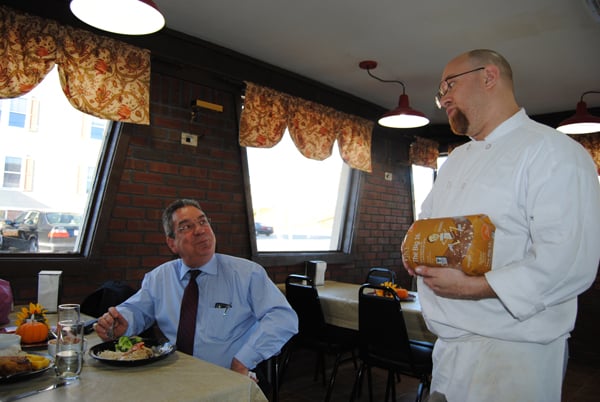 LEWISTON, Maine (RNS) On a main drag dotted with fast food joints, a new church-run restaurant is breaking the mold: It offers vegan fare as a healthy alternative in a low-income neighborhood.

But for Seventh-day Adventists, who opened The Ark in a former Pizza Hut earlier this year, the project is no first. Adventists established meatless restaurants as early as the late 19th century in a bid to encourage healthy living.

Now, after decades of lackluster interest, the tradition is being revived. Eager to rekindle urban ministries, Adventists are feeding growing numbers of city dwellers hungry for meals that are good for both the body and the planet.

“There’s greater interest in vegetarian eating and healthful living now than ever,” said David Trim, director of archives, statistics and research for the Seventh-day Adventist Church. “It’s an idea whose time has come.”

These days, local and regional Adventist initiatives are giving rise internationally to new vegan (no animal products) and vegetarian (no meat, but permits dairy) restaurants.

Adventists have opened new vegetarian restaurants this year in New York City, Phnom Penh (Cambodia), Copenhagen (Denmark) and Tampere (Finland), according to Trim’s records. Others have sprung up in recent years in cities as varied as San Francisco and Chattanooga, Tenn. More are in the works in countries from England to Brunei, a Muslim nation where Christian evangelism is banned but operating a restaurant is permitted.

For Adventists, who believe discipleship involves care for the body as well as the soul, meatless restaurants provide vehicles to bless the world. They also enable new friendships to take root as diners, wait staff and cooks share common passions. When making friends, being able to sell someone a tasty, inexpensive bean chili or share a hummus recipe doesn’t hurt. 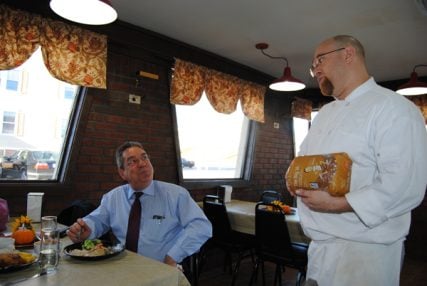 “People are really tired of words,” said Matthew Blake, a Wal-Mart forklift driver and volunteer chef at The Ark, where entrees cost less than $9. “If I can educate people to make lifestyle changes, lower their cholesterol and improve their wellness, they’re being healed. And so this is as close as you can really get to modeling the life of Christ -- by healing.”

The Ark’s main purpose as a “center of influence” is to promote good health and the happiness that comes from feeling healthy, according to director Don Ball. Now open three days a week for lunch, The Ark will expand hours in January to offer midday meals six days a week and dinner two nights a week.

After lunch on weekdays, tables are routinely folded up and chairs reconfigured for free workshops on health-related topics such as therapeutic massage, hydrotherapy, smoking cessation and vegan cooking.

On a recent night, raw food chef Raphaelle Vatistas showed some 20 attendees how to make desserts without dairy or refined sugar. Many attendees are trying to address health problems, from diabetes to cancer, but some turn out for other reasons, too.

“People are curious” about how to eat well without meat or dairy, Vatistas says. “People recognize, 'it’s better for my health, it’s better for the world, it’s better for compassion with the animals.' It can appeal to all these different facets of the individual.”

Eating meat taxes the environment far more than a plant-based diet does, according to the Center for Science in the Public Interest. Methane from livestock and their manure does as much to accelerate global warming as 33 million cars, according to CSPI. Livestock production also strains resources: 41 percent of irrigated U.S. farmland goes for livestock feed production, and 4,500 gallons of water are required to produce one quarter-pound of beef.

Some patrons of The Ark are now rethinking how they relate to the natural world and other creatures -- even if they aren’t signing on to Adventism, which encourages but does not require a meatless diet.

Consider Michael Dubois, a Lewiston attorney and evangelical Christian who five months ago adopted a diet devoid of animal foods and oils. Aiming to reduce his risk of heart disease, he meets his wife, Leslie, at The Ark for lunch two or three times a week.

On a recent weekday, as Dubois munched on steamed broccoli and oat grain patties in a cashew sauce, he reflected on how his life has changed -- and not just by losing 25 pounds in five months. An avid hunter, he used to shoot deer every autumn and pack the freezer with venison, but not this year.

“I’m not feeling like I’m missing out on anything,” he said. The decision not to hunt “is not grounded in any religious conviction at this point, but is more a matter of, ‘let me just think about this whole (hunting) thing.’”

For Doreen St. Laurent of Lewiston, weekly meals at The Ark are part of a regimen to keep her cholesterol levels down. She finds the meatless diet helps her feel better and therefore be less stressed, more patient and friendlier toward others.

Through her vegan diet, she now feels closer to nature, she said, and she’s cultivated practices to reflect that deeper connection. With “Earthing,” she keeps her bare feet still in the dirt or grass for an extended time. She does it while reading a book for about 30 minutes, even when temperatures outside drop to 40 degrees.

“I really like sitting outside with my bare feet on the ground and feeling the energy from the Earth, which is something I never would have thought I’d be doing,” St. Laurent said. “It’s just a matter of becoming more (connected) with nature, like it was 200 or 300 years ago.”

For those seeking spiritual connections, Adventists are glad to share about their faith, but only if restaurant customers ask about it. Familiar hymn tunes, such as “Be Thou My Vision” and “How Great Thou Art,” play softly without lyrics in the background as people eat lunch.

Outside of lunch hours, tables are sometimes cleared to make room for worship, Bible study or a prophecy seminar. But if all people do at The Ark is eat lunch, that’s quite alright.

“If they don’t become Christians, that’s fine,” Ball said. “We’re just here to love, to bring peace, to bring joy to the community. I mean, that’s what Jesus did.”