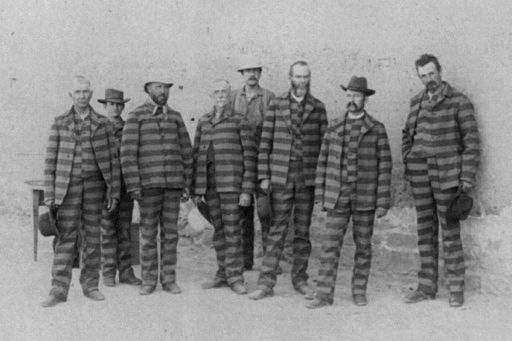 Utah Mormons incarcerated around 1885 for the practice of polygamy.

In the last few weeks the LDS Church has issued a series of groundbreaking statements about controversial issues in its own history, including the racist priesthood ban and controversies over Joseph Smith’s methods of translating the Book of Mormon.

Among the group of “Gospel Topics” statements is a brief but refreshingly frank discussion of the Church’s involvement in polygamy in the nineteenth century.

I’m glad this day has come, and here’s why.

I was a Relief Society teacher back in 1998, when the new Brigham Young curriculum was introduced. In the manual, polygamy, which had been such an enormous feature of Young’s life and theological teaching, was nowhere mentioned. Even the brief chronology of his life at the back of the book made it seem that Young had been a typical Victorian monogamist, losing his first wife to illness in 1832 and then remarrying in 1834—only once.

I had to figure out a way to teach historical truth using a manual that seemed to encourage me to ignore important facts about Young’s life and beliefs. Not only had he married some 55 times, but he also taught that “celestial marriage”—then defined as plural marriage—was necessary for eternal exaltation.

Polygamy was so defining a feature of nineteenth-century Mormon life and theology that the Church’s late twentieth-century approach of downplaying or even denying polygamous history was embarrassingly inadequate—and, one might argue, morally wrong.

It was also an approach with damaging missionary consequences. The advent of Google and readily accessible information in the last decade has meant that ordinary members of the Church, including new converts, can retrieve primary and secondary source material that is sometimes different from, or even contradictory to, the immaculate Sunday School lessons they’ve heard at church.

That discrepancy has caused painful cognitive dissonance for many. While ex-Mormon critics seem to have exaggerated the remarks of Elder Marlin Jensen when he spoke of a significant “apostasy” of people leaving the Church because of troubling encounters with its history, it’s certainly true that some members have left over their issues with historical polygamy, racism, and other things. According to Jensen, such defections are precisely why the Church has created these “Gospel Topics” statements online.

Here are [tweetable] three things the LDS Church has officially acknowledged with its new statement on polygamy [/tweetable]:

Probably half of those living in Utah Territory in 1857 experienced life in a polygamous family as a husband, wife, or child at some time during their lives. By 1870, 25 to 30 percent of the population lived in polygamous households, and it appears that the percentage continued to decrease over the next 20 years.

In other words, half of those Mormons who were around at the height of plural marriage during the Mormon Reformation of 1857-58 would have lived in a polygamous family at some point during their lives—a figure that decreased sharply as polygamists faced the harsh legal repercussions in the 1870s and especially the 1880s.

What does the new statement not say? Well, it doesn’t address the controversial issue of early Church leaders marrying women who were already married to other men, and it doesn’t delve into the theological thorny question of whether plural marriage remains the order of heaven—a question that continues to plague some Mormon women I know.

But it is a huge step forward in Mormonism’s candid acknowledgment of the reality and extent of polygamy in the nineteenth century. [tweetable]The Church’s new statement on polygamy points to the place I hope we will address such knotty questions in the future: at church.[/tweetable]

Covering it up is not the answer.

Pretending that the past has little or no bearing on the present is not the answer.

Hearing about controversial historical topics at church, in a safe setting, where people of faith can discuss them openly . . . that is the answer.