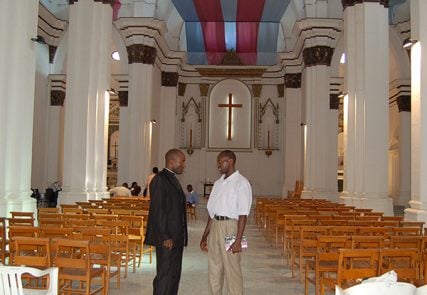 A Catholic priest converses with an Anglican pastor at the Christ the King Anglican Cathedral in Tripoli. The number of Anglicans is reportedly growing in Libya. RNS photo by Fredrick Nzwili

(RNS) Church leaders in Libya remain hopeful that Christians in the mostly Muslim country will be allowed to practice their faith, even as the country appears to be moving towards Shariah law.

In December, Libya’s General National Congress voted to make Shariah the source of all legislation and institutions. The vote came amid international concerns over the diminishing Christian populations in North Africa and the Middle East, and increased Islamist influence in countries engulfed by the Arab Spring revolution.

Libya has undergone a two-year transition since 2011 when demonstrations toppled Moammar Gadhafi. Before the revolution, Christians were granted religious freedom, but with the change of power, they have been arbitrarily arrested, attacked, killed and forced by the Islamist groups to convert to Islam.

In September, two Christians were killed in the Derna District of northeastern Libya after they refused forced conversion. St. Mark’s Coptic Church in Benghazi was attacked twice in 2013, according to the Barnabas Fund, a British charity supporting Christians in Muslim-majority countries.

A prominent group, Ansar al-Shariah, which is linked to the September 2012 attack on the U.S. consulate in Benghazi, has accused some lawmakers of being un-Islamic.

But as a special committee embarked on reviewing the nation’s laws, the Rev. Celso Larracas, a priest at St. Francis Catholic Church in Tripoli, said only a small number of Libyans are pushing for Shariah, or Islamic law.

“They are insisting on it, but I think many Libyans want to co-exist with foreigners,” Larracas said.

Libya’s Christian population is composed mainly of foreigners working in the country. It has a small indigenous Christian community as well. There were about 300,000 Coptic Christians and 80,000 Roman Catholics before the fall of Gadhafi. There are also an unknown number of Anglicans and Pentecostals. Christian groups run hospitals and education centers open to all faiths.

Although Christians face attacks, Libya relies on their professional expertise. It must vouchsafe its place in the international community, too, according to the priest.

“The foreigners are doing most of the professional work, especially around oil,” said Larracas.

With increasing calls for an Islamic constitution, church leaders have sought the government’s assurance of religious freedom for Christians, according to the Rev. Vasihar Eben Baskaran, a priest at Christ the King Anglican Church in Tripoli.

“They have assured us that we shall be free to worship, even with the new law,” Baskaran said in a telephone interview, explaining that Christians in Libya are free to worship, but may not seek converts or evangelize.

Christians here, as in other countries where the Arab Spring swept autocratic governments out of power, had hoped for more freedom, but this has not been the case.

In Egypt, Coptic churches have been burned or bombed, since President Hosni Mubarak was ousted in 2011. In Tunisia, where the Arab Spring started, Christians face harassment and discrimination. Since the ouster of President Zine Abedine Ben Ali in 2011, the country has moved toward an Islamist direction, though the country’s Islamist prime minister announced his resignation Thursday (Jan. 9).

At Islamic University in Uganda, Sheikh Hamid Byamugenzi, a religious studies lecturer, pointed out that it was evident Christians in these countries are being harassed.

“The groups that have come to power or led the revolution want to see much space given to practice of Islam,” he said. “But I think they need to have discussions among themselves to agree how to co-exist with others.”

In Algeria, professor Larbi Djeradi, a Muslim who teaches at the University of Mostaganem, said intolerance toward non-Muslims in North Africa and the Middle East is a product of political manipulation.

“The perception of Shariah in the Western world is absolutely negative and its comprehension by radicalized Muslims is negative,” Djeradi said.

He termed the Arab Spring a momentary political disruption that “has its place in the logic of the dynamic of history of the region.”