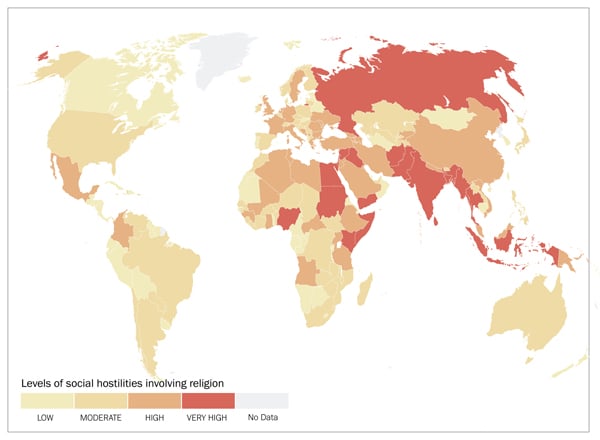 LONDON (RNS) Global religious hostilities reached a six-year high in 2012 and affected more people than government curbs on religious freedom, according to the Pew Research Center’s latest report on religious restrictions around the world.

The report, released Tuesday (Jan. 14) ahead of National Religious Freedom Day on Thursday, shows that 74 percent of the world’s population experienced high levels of social hostility toward religion, up from 52 percent in 2011.

The sharp rise is due to hostilities in China, which for the first time in the survey’s six-year history, scored a “high” level of religious strife. Home to more than 1.3 billion people, China experienced an increase in religion-related terrorism, mob violence and sectarian conflict in 2012.

The greatest levels of social hostilities toward religion were felt in Pakistan, Afghanistan, India, Somalia, Israel and Iraq, according to the report.

“One of the common things we see in that group of countries is sectarian conflict,” said Brian J. Grim, senior researcher at Pew Research. “In Pakistan, even though minority religious groups like Christians face hostility, there’s also inter-Muslim conflict between Sunnis, Shias and Ahmadi Muslims.” 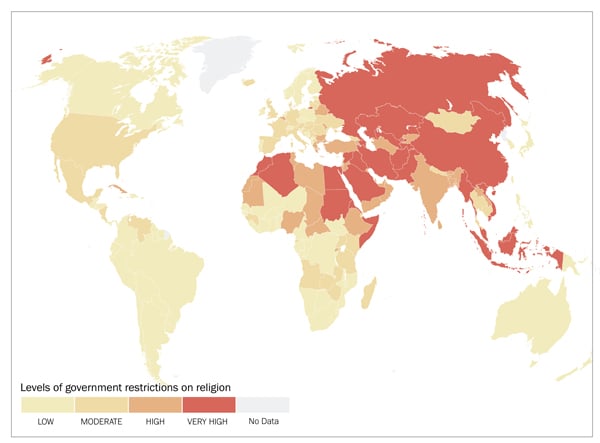 When social hostilities and government restrictions are combined, Pew estimates that 5.3 billion people or 76 percent of the world’s population lived under high religious restrictions in 2012.

“The Pew report is a chilling reminder that religious freedom is losing ground in much of the world,” said Charles C. Haynes, director of the Religious Freedom Education Project at the Newseum in Washington. “The rise in social hostilities toward religion in 2012 is a harbinger of much worse to come.”

Among the world’s most populous countries, Egypt, Indonesia, Russia, Pakistan and Burma had the worst overall restrictions in 2012, while Brazil, the Philippines, Japan, South Africa and the Democratic Republic of the Congo had the fewest.

On the regional level, social hostilities and government restrictions remained highest in the Middle East and North Africa. Libya, Tunisia, Syria and Lebanon saw the greatest rises in regional hostilities in 2012, and experienced violent attacks against religious minorities. Widespread government intimidation of religious groups was reported in 16 of the region’s 20 countries.

On the global scale, Mali, Libya, Mexico, Tunisia, Syria, Lebanon and Afghanistan experienced some of the greatest increase in hostilities. The social situation improved significantly in only seven countries, including Ethiopia, Cyprus and Cambodia. 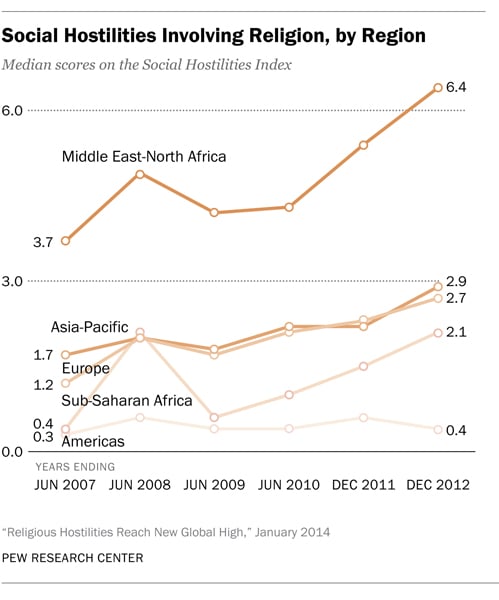 “Some of these improvements are associated with peacemaking efforts to solve long-standing conflicts,” Grim said. In Cyprus, a country divided between the predominantly Muslim north and the predominantly Christian south, there were a number of efforts to bridge divides, he added.

The number of countries in the world with “very high” social hostilities toward religion rose from 14 to 20 between 2011 and 2012, with Syria, Lebanon, Sri Lanka, Bangladesh, Thailand and Burma joining the worst of the worst.

For the first time, Azerbaijan, Tajikistan, Morocco, Iraq and Kazakhstan joined 19 other countries with “very high” government restrictions. Overall restrictions increased somewhat in 61 percent of countries between 2011 and 2012.

Abuse targeting religious minorities was reported in 47 percent of countries, up from 38 percent in 2011. The report documents intensified violence in Buddhist-majority Sri Lanka against Muslims and Christians and in Muslim-majority Egypt against Coptic Orthodox Christians.

Christians were harassed in 110 countries, Muslims in 109 and Jews in 71. Harassment against Hindus, Buddhists, folk religionists and members of other faith traditions also increased by country. Jews faced social harassment in more countries than they faced government harassment. The opposite was true for Sikhs and Baha’is.

Haynes sees a strong connection between governments denying their citizens religious freedom rights and the outbreak of sectarian violence. “Without a renewed commitment to religious freedom, religious differences will deepen and the world will be torn by religious conflict,” he said.

Governments used force against religious groups in nearly half of the world’s countries. Violence or the threat of violence was used in 39 percent of countries to compel people to adhere to religious norms, including in Somalia, where the Islamic militant group al-Shabab continued to ban “un-Islamic” behavior.

Pew documents a rise in the number of countries in which women were harassed for religious dress, mobs turned violent over religious issues and sectarian violence escalated. “Number of Countries Where Religious Groups Were Harassed, by Year” graphic courtesy of Pew Research Center.

In Burma, communal violence led to hundreds of deaths and the displacement of more than 100,000 Rohingya Muslims. Sectarian strife continues to claim lives in Syria and Iraq.

Pew’s latest report covers 198 countries. Notably absent is North Korea, which Pew acknowledges “is among the most repressive in the world with respect to religion as well as other civil and political liberties.” Due to the country’s repressive and closed environment, Pew was unable to obtain sufficient data on North Korea for this study.

News
Study: Social hostility to religion declines, but government restrictions rise
Follow us on Facebook!
Submit your photos to RNS