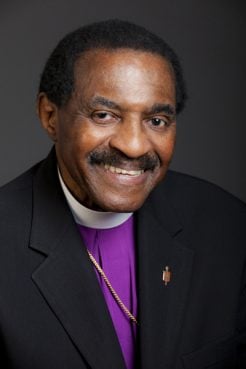 (RNS) The nation will mark the birthday of the Rev. Martin Luther King Jr. on Monday (Jan. 20) with speeches, prayers and volunteer service.

But for decades, retired United Methodist Bishop Woodie W. White has marked the holiday in a more personal way: He writes a “birthday letter” to the civil rights leader who was killed in 1968.

“It was a way to get kind of a year’s assessment on what the nation was accomplishing and not accomplishing in the area of race,” said White, a bishop-in-residence at Emory University’s Candler School of Theology for the last decade.

“I did it because, frankly, I needed to have perspective. I needed to not get discouraged, and I needed it to be affirming of progress in race which had taken place over the course of a year.”

White started the custom in 1976, when he chose to write a letter to King instead of giving a traditional speech to the Human Rights Commission in Howard County, Md. He continued writing on and off while he served as the first head of the United Methodist Church’s General Commission on Religion and Race. Since 1985, he’s written the letters annually, and they’re now published by United Methodist News Service.

White’s letter updates King on the latest strides in race relations while also acknowledging “a hard residue of racism that just won’t seem to die.” He admitted in his most recent letter to being discouraged by mass incarceration and the “lack of outrage” about legislation that has disenfranchised black voters.

“While we are yet flawed by those among us who hold to racial bigotry and intolerance, they no longer define us as a nation or a people!” White wrote in his 2014 edition.

A truce in Birmingham’s racial strife comes in 1963 as the Rev. Martin Luther King Jr. and associates call a temporary halt to mass demonstrations and “freedom marches” in the Southern city. King said he believed honest attempts were being made by white business leaders to settle racial differences. With him are the Rev. Fred L. Shuttlesworth, head of the Alabama Christian Movement for Human Rights (second from right), and the Rev. Ralph D. Abernathy, King’s chief assistant. Religion News Service file photo

White, 78, and King were not close friends, but they met in the 1960s when White was a Detroit minister and King made annual visits to the city to preach a sermon during Lent.

In 1963, White was among the more than 100,000 who took part in the Detroit “Walk to Freedom” march, where King gave a trial run of his now-famous “I Have a Dream” speech. Two months later, White was in a larger crowd at the March on Washington.

“He began to speak and I said, ‘This sounds familiar,’’’ the bishop recalled. “It was a different context. It was almost like hearing it anew, or for the first time.”

Now, White communicates with King by letter, even though his missives will never be answered.

“The one thing every letter tries to say is that we are light-years ahead in the area of race than we were when Dr. King was alive,” said White. “If he could make an overall assessment, he would not believe how far we’ve come as a nation.”

“We have more and more people of different races relating to each other, working in offices together, neighbors,” White said. “At the same time, we have schools that are more segregated, for instance, than they were in 1954.”

The letters also have personal touches, with references to his friend and civil rights activist Joseph Lowery and the deaths of Rosa Parks and Nelson Mandela. He marveled at the two elections of President Obama, but criticized how the appointments of former Secretaries of State Condoleezza Rice and Colin Powell were “not so appropriately recognized.”

Bettie W. Story edited White’s columns when he served as a bishop in Illinois. His “Dear Martin” letters were published in a church newspaper and gained a national audience after she recommended them to The United Methodist Reporter. 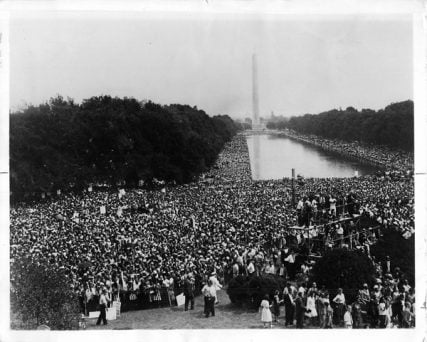 On Aug. 28, 1963, Martin Luther King Jr. addressed the crowd gathered during the March on Washington, delivering his “I Have a Dream” speech. RNS file photo

Illinois Methodists, both black and white, appreciated the annual dispatches, which encouraged them to pay tribute to King, she said.

“The bishop made it easier for them to do something within their own local churches,” recalled Story, 80. “They would reprint the letter in their church newsletters.”

White speaks from personal experience when he tells King how far race relations have come. As a Detroit pastor, he visited a white Methodist church in Jackson, Miss., in the 1960s and was arrested and fined $1,000 for “disturbing divine worship” and $1,000 for trespassing. Decades later, as a bishop, he was invited to speak and join in a potluck luncheon at that same church, which is now one of the most integrated in the city.

White often closes his letter with a variation on the words of the civil rights anthem “We Shall Overcome’’ as a final tribute to King in what has become an annual thank-you note to a man who many never got to thank before his 1968 assassination.

“It’s important for current generations to be aware that we have not overcome racism, we’ve not overcome prejudice,” White said. “It’s like sin: We’re always a sinner no matter how good you think you are, that we’re always striving to be better.”

“Perhaps that is the difficulty of navigating race in America as an identified racial minority — that is, the unpredictability of encountering racism in day-to-day living. One must always be prepared. It can manifest itself in so many different places and in so many different forms. In a classroom or office, at a department store counter, in a committee meeting or in a casual conversation, even at the Table of the Lord. One simply never knows.”

“Because my life has been lived in the world of religion and the church, I know this fundamental shift has taken place in the church as well. No longer do clergy justify racist practice or belief based on religion or theology. No sermons are preached today in their name. For the most part, the position of the church is not couched in racism. That would be considered un-Christian.”

“As we celebrate your birth date in 2007, if I were to be asked if race relations in America are better or still a problem, I would have to respond, ‘Yes!’”