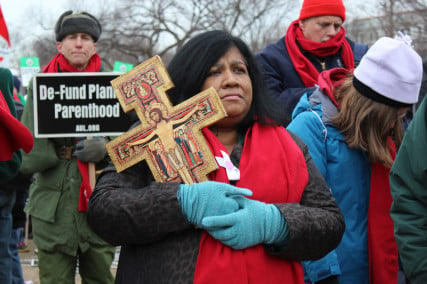 (RNS) Evangelicals are the most likely religious group to say that abortion should be illegal in all cases. So why would organizers of the March for Life, the annual demonstration on the Washington Mall, hire someone to reach out to that group?

The 41st march, scheduled for Wednesday (Jan. 22), has traditionally had a strong Catholic presence, with priests and nuns marching on or around the anniversary of Roe v. Wade, the Supreme Court decision that legalized abortion. Its founder, Nellie Gray, who died in 2012, was Roman Catholic, as well as is her successor, Jeanne Monahan.

“The march has a very Catholic feel to it with lots of rosaries, Virgin Marys and crucifixes,” said Jon Shields, a government professor at Claremont McKenna College. “It hasn’t been particularly savvy about reaching broader audiences.” 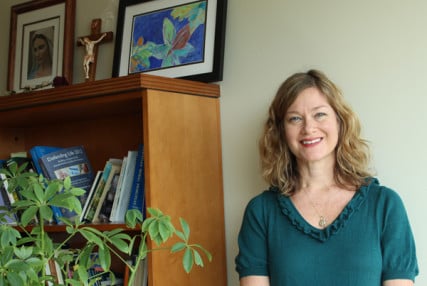 Jeanne Monahan president of March for Life, the large anti-abortion protest on the National Mall that will mark the 41th anniversary of the Supreme Court’s Roe v. Wade decision legalizing abortion. RNS photo by Adelle Banks.

But that’s changing. Monahan met with evangelicals last year to shore up support, and she hired Bethany Goodman, an assistant director whose job includes reaching out to evangelicals and other religious groups. This year the march will feature one headliner most evangelicals can recognize: Focus on the Family founder James Dobson.

One of the challenges Goodman has faced in rallying evangelicals to the march is the lack of formal structure and organization, compared to the Catholic Church, which has offices of “pro-life ministry” both nationally and in each diocese around the country. Catholic schools will often bus youth to the march.

Goodman said she has started working with parachurch organizations such as the Family Research Council, the Southern Baptist Ethics and Religious Liberty Commission and Alliance Defending Freedom.

“The Catholic Church does a fantastic job of coordinating the bus trips when there’s obviously not that structure in the Protestant realm,” Goodman said.

This year’s march will feature a mix of parties and religions. Republican Majority Leader Eric Cantor, who is Jewish, and Democratic Rep. Dan Lipinski, who is Catholic, will be among those speaking at the rally. As abortion opponents seek to capitalize on gains they have made in restricting abortion at the state level, it is natural that they would try to bring in more evangelicals at their most public event of activism.

Organizers are also exploring other strategies, including the use of technology. They hope to use the success anti-abortion activists had on Twitter during last year’s trial for abortion provider Kermit Gosnell, hoping to get #whywemarch to trend and draw in more attention — and eventually marchers for the future.

Last year, Pope Benedict XVI surprised marchers by tweeting his support, and observers are watching for whether Pope Francis will do the same.

The consensus among historians has been that Catholic doctrine provided a teaching on abortion long before evangelicals came around on the issue in the 1970s, Shields said. 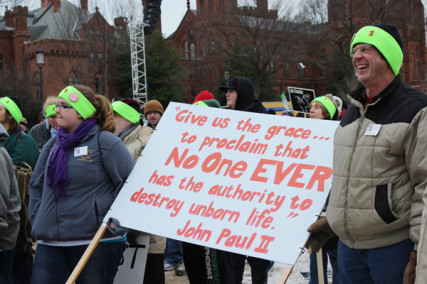 Monica Kunze and her father, Stephen Kunze, from Colby, Wis., on the National Mall for the March for Life on Jan. 25, 2013. RNS photo by Adelle M. Banks.

“The March for Life folks’ outreach to evangelicals is of course about rounding up people who already agree with them and getting them mobilized for action,” said Michael Mitchell, communications director for the Religious Coalition for Reproductive Choice. “We are doing the same thing from a mainstream and progressive position that represents the majority of Americans and a majority of people of faith. Evangelicals are not on our radar screen for mobilization.”

This year’s theme for the march focuses on an issue evangelicals have become increasingly passionate about: adoption. Some evangelical leaders have urged a focus on solutions to helping women avoid abortion rather than focusing on defeating Roe v. Wade in the courts.

The march, where tens of thousands brave frigid weather as they make their way to the Supreme Court, will feature Dobson’s son, Ryan, too. Monahan said march leaders reached out to Ryan Dobson because he has spoken publicly about being adopted. The father and son run their own show called “Family Talk.”

Also speaking will be Radiance Foundation co-founder Ryan Scott Bomberger, who was conceived during rape and later adopted.

Evangelicals see abortion as a moral issue. Three-quarters of white evangelical Protestants consider having an abortion morally wrong, compared to 53 percent of white Catholics, according to Pew.

Monahan said there were no official estimates on the size of the march, and she isn’t sure what the breakdown would be among religious groups. She expects this year’s march to be smaller since it will take place on a Wednesday.

The march is not advertised and marchers don’t sign up. Nor do organizers police signs. Some marchers will hold up graphic images of aborted fetuses. Monahan said she is not a fan of that approach but can’t tell marchers what to do.

“It’s kind of wonderful and scary; you don’t have control over what they’re wearing, what they’re carrying,” she said. “It’s the joy and the frustration of being an organic and grassroots organization.”