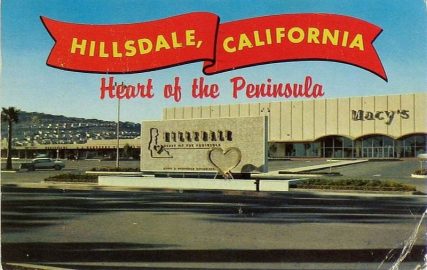 Color photocrome postcard of the Hillsdale Shopping Center, as seen from the front entrance sign by the Macy’s anchor, depicted shortly after the shopping center opened in the mid-1950s.

It had everything except people.

The fabled mall — opened in 1954, enclosed in 1982 — felt like a ghost town. Or, in my frame of reference, like a big mainline Protestant church on a Sunday morning.

It was eerie. I felt sorry for merchants paying steep rents and payrolls for foot traffic that wasn’t there. Will it get better after school? Maybe. But I just read that teenagers have moved on from mall stores. Even reliables like American Eagle Outfitters can’t draw them in for fashions that don’t update fast enough in a wired age.

Meanwhile, just up the peninsula south of San Francisco, the newly refurbished streets of Burlingame teemed with shoppers, many of them going in and out of stores exactly like those at Hillsdale.

None of this is new. Enclosed malls have been an endangered species for years. Strip malls are doing better, especially if they offer a downtown walkable feel. Online retail is doing best of all.

My point isn’t to decipher shopper psychology — even the experts can’t do that in real time — but rather that something fundamental has changed, and those grounded in the old are suffering.

Proprietors of the old soon discover that, as wedded as they might be to the “historic” campus, newer constituents don’t share their devotion. At colleges, they want an affordable education, not a link to 100 years of tradition. They want a swim team, not a pro-caliber golf course. They want to hear about God, not about a budget dominated by outsized facilities expenses. They feel drawn to mission, not to heating bills and organ repairs.

Having tried hard in several churches to raise funds for legacy expenses, I know it’s a tough sell, and getting tougher. And it should be a tough sell. Churches had no business building facilities they could barely afford to construct, not endowing them to cover ongoing expenses, and expecting future generations to be locked into their decisions.

This is especially true in situations where over-the-top grandeur fed the hubris of a certain group, and now that group and their deep pockets are gone.

The problem is that too many religious institutions have built their lives around maintaining legacy facilities. They haven’t built the community and shared mission that would enable them to abandon the Gothic pile and still have a reason for being. Take away their facilities, and suddenly there isn’t anything binding them.

What should the folks guiding legacy institutions be doing? They should see that the game has changed and it might be over. Accept reality.

Then dig deeper for the real values they should be serving. Education, not football programs; discipleship, not stylish worship; selling a product, not clinging to real estate.

Culture
5 ways churches can help stop the Ebola hysteria (COMMENTARY)
Culture
COMMENTARY: Scapegoats along the border
Culture
COMMENTARY: Sex and the never-ending Christian adolescence
Culture
COMMENTARY: Rallying the troops with self-righteous fury
Beliefs
COMMENTARY: Winning and whining are insufferable
© Copyright 2020, Religion News Service. All rights reserved. Use of and/or registration on any portion of this site constitutes acceptance of our User Agreement and Privacy Policy, Privacy Statement and Cookie Notice. The material on this site may not be reproduced, distributed, transmitted, cached or otherwise used, except with the prior written permission of Religion News Service.